Elecrow develops and manufactures electronics products for the maker market, and in recent years entered the STEM education market with products such as CrowPi2 Raspberry Pi 4 education laptop that I reviewed last year. The laptop integrates plenty of electronics modules, and students can learn Scratch visual programming as well as Python programming with the educational software running on the laptop. 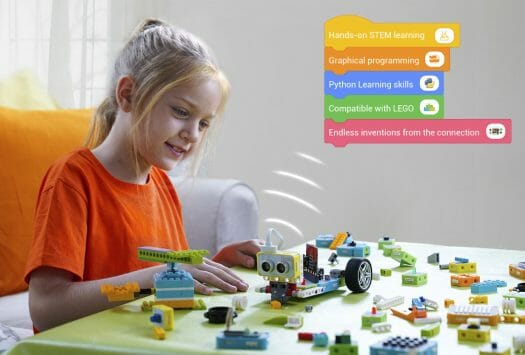 There are over 80 programmable electronic magnetic modules and Lego bricks, with three different sizes ( large, middle, and small modules) of different colors with blue used for power control and logic control, green for output, yellow for input, and orange for advanced programming. Out of the 80+ modules, around 30 can be used without programming at all.

Elecrow provides 5 kits to let users learn basic electronics and programming knowledge, namely the Hello Kit designed for beginners and younger pupils without programming knowledge, the Explorer Kit with 8 modules, the Inventor Kit, based on Micro:bit, with 8 modules and LEGO bricks to get started with programming, the Arduino based Creator Kit for more advanced learners, and the Master Kit with an ESP32 board and TFT display for more complex projects such as creating your own phone or gaming console. While the company claims Raspberry Pi is supported none of their kits include one.

On the software side, the company provides Scratch 3.0 based Letscode educational software to learn visual programming in Windows and Mac OS, as well as Python programming just like for their CrowPi2 platform. There are a total of 70 PBL (Project-based Learning) lessons available for the 5 kits.

Elecrow has launched Crowbits on Kickstarter with a ~$10,000 funding goal. Rewards start at around $26 for the Hello Kit, and up to about $90 for the Master or Creator kit. The company also offers bundles with multiple kits. The shipping fee is not included in the price and will be determined after the campaign ends.   Backers should expect their rewards to ship in June if everything goes according to plans.

Judging by the bags under those little girl’s eyes, it looks like she just pulled an all-nighter to make her robot work. Crowbits manages to teach the essence of software development surprisingly well !