We covered MatchX M2 Pro LPWAN Crypto-miner yesterday, and at first, I really thought that combining LoRaWAN gateway with cryptocurrency mining was really just a gimmick. But after talking with others, I found out that MXC Foundation HashDash used with the MatchX gateway was not the only such solution, and I was introduced to Helium Hotspot. A Helium Hotspot is a LoRaWAN gateway that also allows you to earn HNT cryptocurrency, and it could more than just prove a way to fund the deployment of public LoRaWAN networks, as as we’ll see below some people or companies are making some serious money, while others not so much. A DIY Helium Hotspot can also be made from a Raspberry Pi 3/4 and a RAK2245 Pi HAT. Helium Hotspot key features and specifications: SoC – Quad-core Arm Cortex-A53 application processor System Memory – 1GB RAM Storage – 64GB Storage Connectivity Ethernet Dual-band Wi-Fi Bluetooth 4.2 LE LoRaWAN bands – RF: 902-928MHz (US), […]

A few years ago, I received MatchX.io MatchBoX outdoor LoRaWAN gateway for review, and eventually tested it with RAK811 LoRa tracker once I got a node to play with, and made sure I did not break any local laws. But now the company has come up with an unusual gateway with its MatchX M2 Pro LPWAN Crypto-Miner that acts as a traditional LoRaWAN gateway, as well as a cryptocurrency miner. I’m a bit perplexed by the solution as miners are notoriously power-hungry, but let’s have a look. MatchX M2 Pro specifications: SoC – NXP i.MX 6UL (MCIMX6G2CVM05AB) single-core Arm Cortex-A7 processor @ up to 528MHz System Memory – 256MB DDR3 RAM Storage – 256MB NAND FLASH, optional SSD up to 32GB or industrial SD-Card Networking & Wireless Connectivity LoRa Radio – SX1302 chipsets, 16 frequency channels Supports EU868, US915, AS920, AS923, AU915, KR920, IN865 regions 2.4Ghz 802.11b/g/n WiFi 4 GPS via UBlox Max 7Q GNSS receiver with additional LNA 10/100 […] 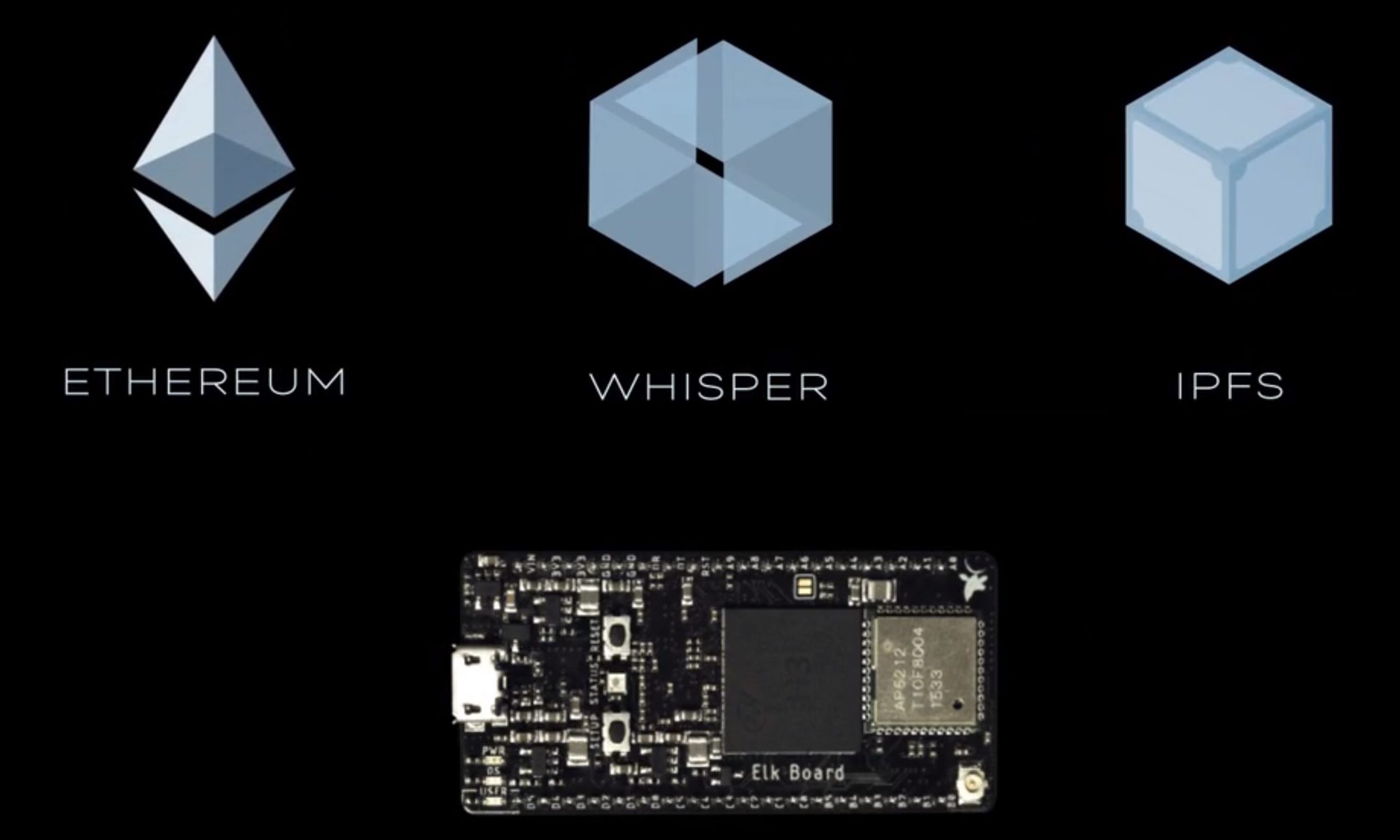 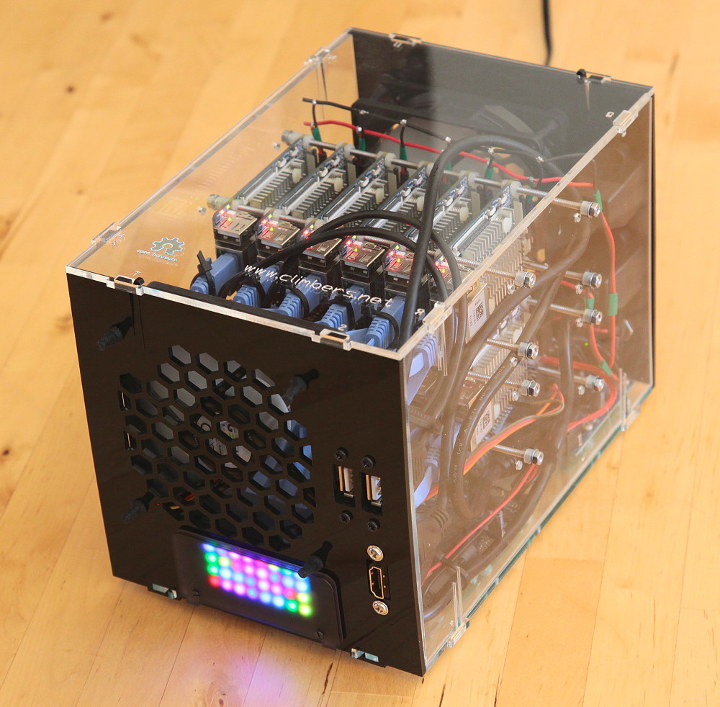 Nick Smith has been messing around with clusters made of Arm boards for several years starting with Raspberry Pi boards, including a 5-node RPI 3 cluster, before moving to other boards like Orange Pi 2E, Pine A64+, or NanoPC-T3. His latest design is based on twelve NanoPi Fire3 boards with 8 cores each, bringing the total number of cores to 96.  The platform may not be really useful for actual HPC applications due to limited power and memory, but can still be relied upon for education and development, especially it’s easily portable. Nick also made some interesting points and discoveries. It’s pretty with shiny blinking LEDs, and what looks like proper cooling, and the cluster can deliver 60,000 MFLOPS with Linpack which places it in the top 250 faster computers in the world! That’s provided we travel back in time to year 2000 through 🙂 By today’s standard, it would be rather slow, but that’s an interesting historical fact. Nick […] 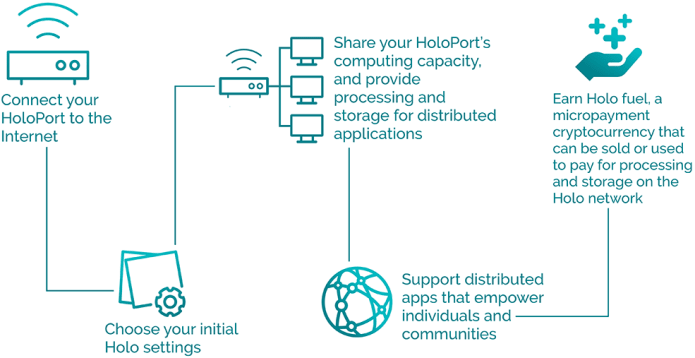 The Internet is now mostly centralized, for example most people search with Google, and Facebook dominates the social media space in many countries. That also means access to content can easily be blocked by governments, and many companies will use your personal data to their benefits. Holo network promises to “take back the Internet” thanks to a P2P distributed web hosting system, where people hosts app from developers in their HoloPort devices, and get paid for hosting crypto apps in Holo Fuel cryptocurrency that can in turn be used to pay for processing power and/or storage on the network, or converted into other cryptocurrencies like Bitcoin, or fiat money (Dollars, Euros…). It’s like a new Internet that uses the current “pipes” (i.e. you’d still need Internet through your ISP), but all content would have to be created from the ground up. It basically aims to replace datacenters, websites, and app from larger companies. The first prototype crypto apps include Clutter […] 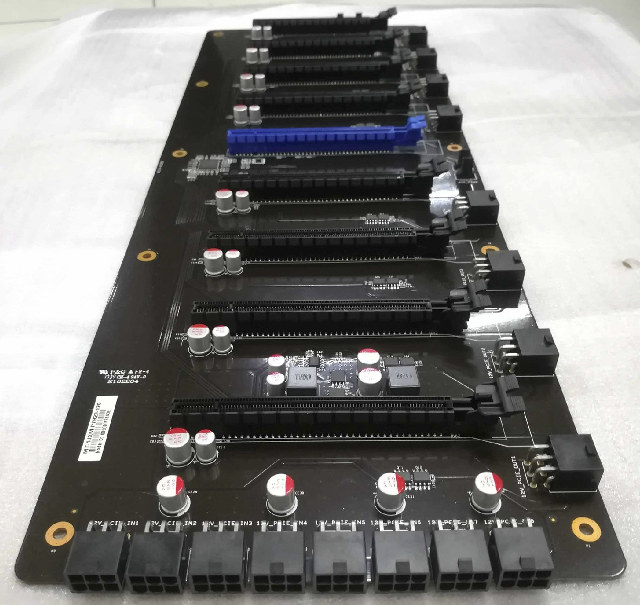 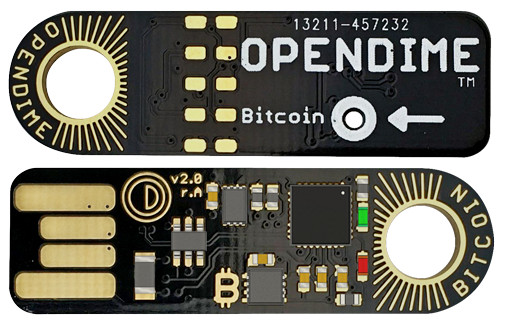 The first time I heard about crypto currencies, specifically Bitcoin, was probably around 2011, and later in May 2012, I noticed a “micro-payments with Bitcoin digital currency” talk at a Barcamp. I did not think much of it at the time, but with hindsights, I should definitely have started to mine some Bitcoins considering the price was $5. Nevertheless, cryptocurrencies appear to be here to stay, and while most transactions occurs over the Internet, Opendime project has made a hardware USB dongle to store Bitcoins, and earlier this year, announced version 2 of their “Verified Bitcoin Credit Stick”. Hardware specifications of OpenDime v2.0 / v2.1 USB stick: MCU – Microchip / Atmel SAMD21 Cortex M0 MCU Security Chip – Microchip / Atmel ATECC508A Crypto chip with support for SHA-256, TRNG, and public key signing (ECDSA) USB 2.0 interface to connect to a computer Bitcoin seal The USB stick works like a piggy bank, you can add Bitcoins to it changing […]