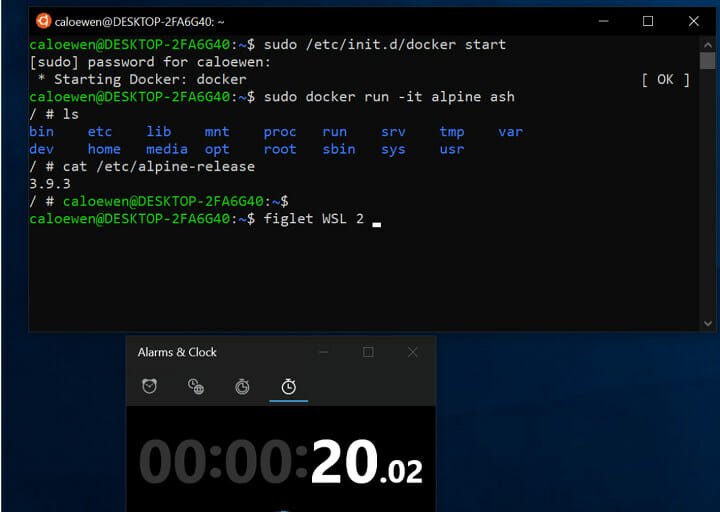 Microsoft first introduced Windows Subsystem for Linux in 2016 in order to let developers runs bash command from Ubuntu user space without having to install Ubuntu in a virtual machine or container. It relies on the Windows kernel with a library converting Linux system calls into ones compatible with Windows. Performance is great until you start to involve file systems calls, for example during code compilations, something that’s fairly common for developers… Microsoft has been working on solving this performance issue, and compatibility issues with software such as Docker, and is now close to releasing Windows Subsystem for Linux 2 (WSL 2) featuring its own Linux 4.19 kernel instead of the Windows kernel plus a translation layer. WSL 2 uses virtualization technology to run its custom Linux kernel inside of a lightweight utility virtual machine (VM) which takes just 2 seconds to boot. That also means there will be separate […] 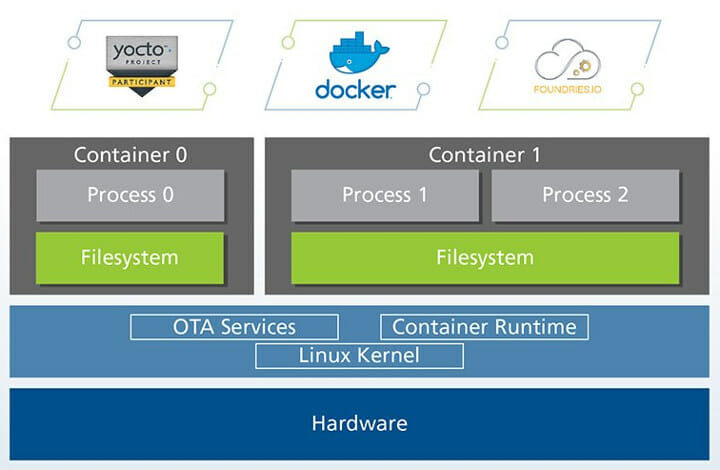 When we interviewed Toradex right before Embedded World 2019, they told us they would focus on their new software offering called Torizon, an easy-to-use industrial Linux Platform, especially targeting customers are coming from the Windows / WinCE environment or who have only experience with application development and are not embedded Linux specialists. The company has now officially launched Torizon, and provided more details about their industrial open source software solution especially optimized for their NXP i.MX modules. Torizon specifically relies on foundries.io Linux microPlatform which provides  full system with a recent stable kernel, a minimal base system built with OpenEmbedded/Yocto, and a runtime to deploy applications and services in Docker containers. The microPlatform is part of TorizonCore (light blue section above) that also includes an OTA client (Aktualizr). TorizonCore is free open-source software, and serves as the base to run software containers. To get started, Torizon provides a Debian container […] 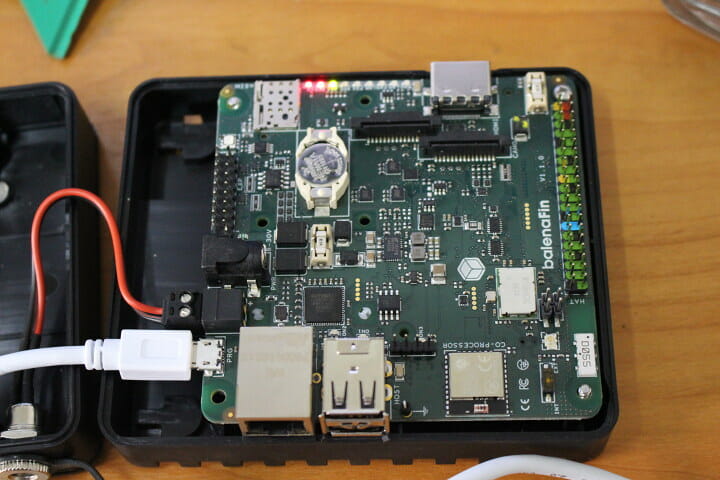 balena Fin is a carrier board for Raspberry Pi Compute Module 3/3+ designed specifically for industrial applications leveraging fleet management services provided by Balena. I received balenaFin developer kit last month, and in the first part of the reviewed shows how to assemble the kit. I’m now had time to spend more time with the kit, as well as BalenaOS Linux based operating system optimized for running Docker containers on embedded devices, and balenaCloud services to manage a fleet of devices from a web dashboard. I’ve mostly followed the instructions in the getting started guides here and there, and will document what I had to do to prepare the image, flash it to the board, and load a sample docker application locally, and through balenaCloud. Downloading and Configuring BalenaOS for balena Fin You’ll find BalenaOS in the download page. While we are using hardware based on a Raspberry Pi Compute […] 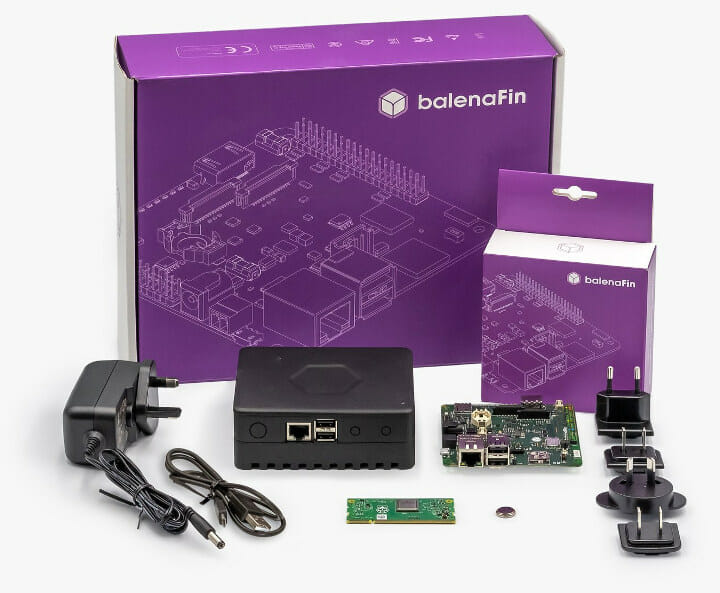 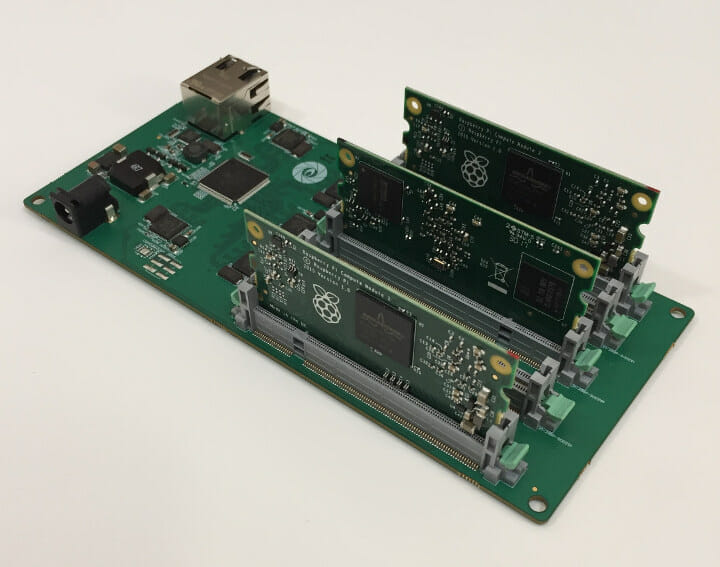 Mininodes is known for their hosting services based on Arm development boards such as Cubieboard2, 96Boards Hikey, or Raspberry Pi 3, but the company unveiled their own hardware platform at Arm TechCon 2018 with miniNodes Raspberry Pi CoM (Computer-on-Module) carrier board that takes up to five Raspberry Pi Compute Modules 3. Beside the five sockets for CM3 / CM3L modules, the carrier board is also equipped with a gigabit Ethernet switch and RJ45 connector, as well as a DC jack to power the whole setup. The white round logo on the board most certainly means mininodes designed the board with Gumstix Geppeto web platform that allows you to fairly easily design your own custom boards in a web browser without having to draw schematics, and then handle the PCB layout. The company explains the Raspberry Pi 3 CoM Carrier Board can be used to provide edge compute capacity in remote […] 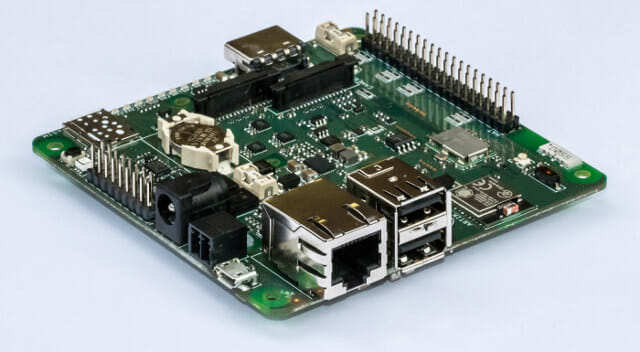 [Update January 2019: Resin.io Project Fin has been renamed to BalenaFin, I have not changed the rest of the article] Resin.io is a both a company and a software platform that includes device, server, and client software to get code securely deployed to a fleet of devices.  Devices are setup to run ResinOS, and to deploy you app, you just need to push the code to resin.io build servers, where it will be packaged into containers and delivered to your fleet of boards. So far, resin.io relied on existing hardware platforms like Raspberry Pi 3, BeagleBone Black, or Intel NUCs, but they’ve now decided to launch their first hardware with Project Fin that takes a Raspberry Pi Compute Module 3 Lite, is hardened for field deployment use cases, and adds some of most commonly requested hardware features such as variable supply voltage support,  RTC, and cellular connectivity (via mPCIe card). […] 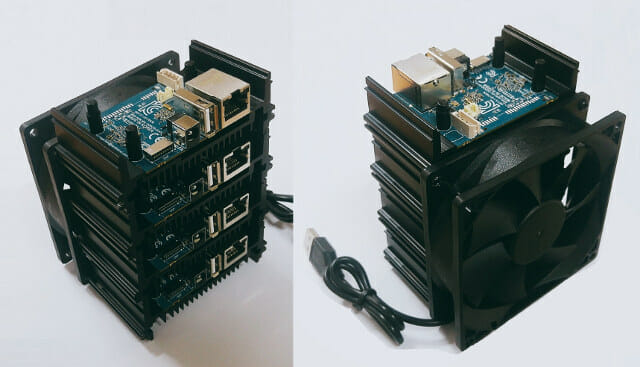 Hardkernel teased us with ODROID HC1 Home Cloud server, and ODROID MC1 cluster last August with both solutions based on a cost down version of ODROID-XU4 board powered by Samsung Exynos 5422 octa-core Cortex-A15/A7 processor. ODROID-HC1 Home Cloud server was launched shortly after in September for $49. It took a little longer than expected for the cluster to launch, but ODROID-MC1 (My Cluster One) is finally here with four ODROID-XU4S boards, and a metal case with a cooling fan. The solution is sold for 264,000 Wons in South Korea, and $220 to the rest of the world. ODROID-MC1 cluster specifications: Four ODROID-XU4S boards with SoC – Samsung Exynos 5422 quad core ARM Cortex-A15 @ 2.0GHz quad core ARM Cortex-A7 @ 1.4GHz with Mali-T628 MP6 GPU supporting OpenGL ES 3.0 / 2.0 / 1.1 and OpenCL 1.1 Full profile System Memory – 2GB LPDDR3 RAM PoP Network Connectivity – 10/100/1000Mbps Ethernet […] 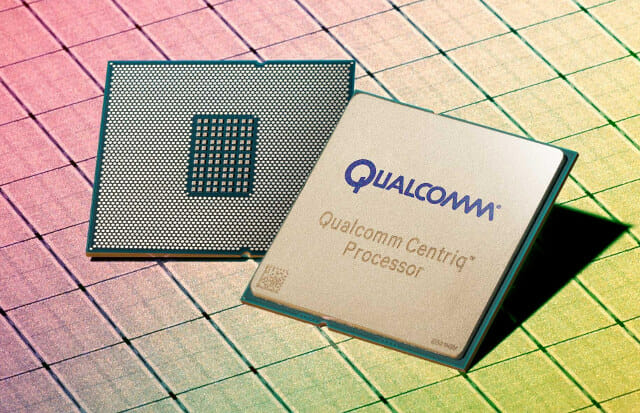