Balena.io – previously known as resin.io – first unveiled Resin.io Project Fin in March 2018. The carrier board for Raspberry Pi CM3L was designed with the aim of easing the management of fleets of connected devices thanks to ResinOS operating systems and the ability to deploy apps packaged in containers through their balenaCloud service.

The project had been renamed to balenaFin a little while ago, and the company has now announced availability of balenaFin 1.1 developer kit with various improvements including support for PoE, dual camera, and Raspberry Pi CM3+/Lite module. 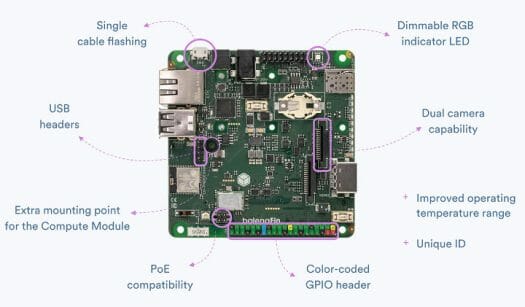 balenaFin v1.1 carrier board specifications with improvements highlighted in bold:

Other improvement include the ability to flash via micro USB port without having to connect a power supply, an extra mounting point for the Compute Module in order to improve vibration resistance, and each board has now an uniquely identifiable data matrix printed on the board (Unique ID).

The board comes without OS, but you can easily flash one of the balenaOS 2.x variants (production, development, standalone)  o the board using Etcher tools while the board is connected to your computer via the micro USB port as explained in the getting started guide. Standalone balenaOS is just a Linux distribution with docker, but without access to balena’s app / device management service.

The board is sold as part of balenaFin 1.1 developer kit for $179 with a balenaFin carrier board with 8GB flash a Raspberry Pi Compute Module 3+ Lite (CM3+/L), a 12V/1.5A international PSU, and a micro USB to USB cable. You may want to spend $20 extra to get the modular DIN-rail case as part of the kit as pictured above.

What caught my eye was the block usb+ethernet hub…

Are they recreating a raspberry pi out of a cm?

That’s about the only way to get Ethernet and USB ports.

Yep, it’s really strange to make complete products out of such crippled base components. It’s like trying to build a car starting from square wheels and hoping most customers won’t care.

Their CEO’s take on this is here: https://www.balena.io/blog/the-raspberry-pi-and-other-sbcs-are-the-ibm-pcs-of-our-time-from-educational-project-to-industry-disruptor/ (I get some of his points but not those about openness, ‘listening to community’ or price, at least not with the combination of CM + Balena carrier board).

> Are they recreating a raspberry pi out of a cm? Sure, but in a more expensive, reliable and flexible way. What almost all RPi users forget (or don’t know): the primary OS of those VideoCore things is called ThreadX, an RTOS not openly available. Hardware needs drivers here too but this is closed source area. So to provide greatest compatibility (running other secondary OS than BalenaOS, allowing for features like netbooting or booting from USB — I bet they’ll provide an USB2 attached SSD for the mPCIe slot if this thing is a success) it’s a requirement to use… Read more »

Instead of using a proper hub and eth in separate chips.
Im aware of the VC IV’s mastrr role over the arm cores. But still can’t serm to understand whats now better by having the same ICs on a separate PCB… Whatever in any case I just own a rpi because you must have at least one TM else im more interested in sunxi or whatever – the new STM32 seems interesting too.

> Instead of using a proper hub and eth in separate chips. Well, since Balena specifies a temperature range of -20°C to 70°C I would believe they use the industrial grade LAN9514 variant on their carrier board (the commercial one on RPi 2/3 has a 0°C-70°C temperature range). Other than that I’m surprised people pay +100 bucks more for ‘just’ * unique device ID since RPi SoC serial numbers suck (not unique but based on RNG) * 2nd camera input * reliable powering instead of crappy Micro USB * industrial grade eMMC * USB2 on mPCIe socket + SIM slot… Read more »

The Raspi Foundation has become a RISC-V Foundation Member …? Interesting …

They are a bottom member, claiming they can help Linux support.

Sorry if my answer is slightly shortish: LOL

The long version:
Why would anyone in his proper state of mind base an industrial grade piece of HW on top of an SBC that’s manufactured by an emtity as transparent as google? I want someone where I’m having some securities being it only knowing who to talk to in case I need to. Also how can I ensure long term support with a board based on a hype?

> Why would anyone in his proper state of mind base an industrial grade piece of HW on top of an SBC that’s manufactured by an emtity as transparent as google? No idea. But obviously it happens. I linked to the Balena blog post above for a reason since there an interview with Steve Jobs Eben Upton is mentioned where he’s telling one third of the RPi sales would go to industrial customers. Wrt long term support I would believe RPi Trading is in a better position than those device vendors relying on TV box or smartphone SoCs like Neutis… Read more »

I mean Allwinner can be convinced with a bucket of bucks (see Olimex’ longevity statement) bit bcm SOCs are not even procurable thanks to the raspi folks read Steve Jobs, as you named him. Weird basis for industrial HW. I would anytime prefer a more expensive or less powerful SOC by a reputed manufacturer unless im big enough to buy directly from someone like Allwinner with the weight of a big customer to negotiate special terms.