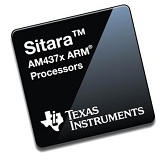 The first time I heard about Texas Instruments Sitara AM437x was via a TechNexion EDM-CT-AM437x system-on-module back in 2012, but Texas Instruments Sitara Cortex A9 processors development seems to have dragged a little longer than expected. Nevertheless, the company has now formally announced their Sitara AM437x ARM Cortex A9 SoC targeting automation, IoT gateways, and other industrial applications, and featuring four PRUs (Programmable Real-time Units), and support for dual camera for terminals with bar code scanning. At launch there will be four AM437xprocessors: AM4376, AM4377, AM4378, and AM4379. The processors will all be based on a single Cortex A9 core  @ 800 to 1000 MHz with 64KB SRAM shared with 32KB data cache and 32KB programmable cache, 256 KB L2 and L3 caches, a 32-bit memory interface supporting LPDDR2, DDR3, and DDR3L, a 2-port Gigabit Ethernet switch , two USB 2.0 OTG + PHY and the following other interfaces: Serial Ports […] 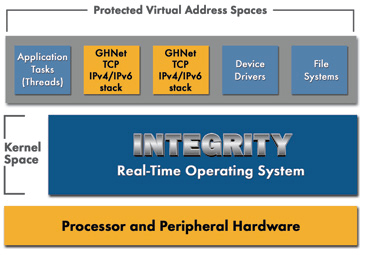 The latest SoCs based on 64-bit ARM Cortex A53 and A57 are not only going to be used in servers and high-end mobile devices, and some embedded applications in automotive, industrial, Mil/Aero  sector, as well as the Internet of Things (IoT) will also leverage the low power, high performance of ARMv8 processors. Green Hills Software has announced their INTEGRITY real-time operating system (RTOS) and MULTI integrated development environment (IDE) will support SoCs based on ARM Cortex A50 series cores. Green Hills provide the following solutions on ARMv8 Fast Model virtual platform: INTEGRITY RTOS which comes with functional safety certifications in industrial, medical, automotive and railway, and delivers real-time determinism Green Hills C/C++ Optimizing Compilers/assembler and 64-bit toolchain MULTI 64-bit IDE debugger, MISRA C/C++ code quality adherence, profiler and other integrated tools. Only ARMv8-A is supported for now, but not ARMv8-R, destined to be used in safety-related applications in automotive and […]

A lot have been covered at ARM Techcon 2010. I’ve blogged a few articles about ARM Techcon 2010, but there is a lot more to discover. A full set of documents and presentation slides shown at Techcon 2010 are available at http://vault.eetimes.com/armconference/proceedings/ The documents are divided in 2 main parts: Day 1: Chip Design Conference Day 2-3: System & Software Design Conference which are then divided into sub-directories with really (hmm) good names such as ATC-100, ATC-101… to ATC-165 so that everybody can clearly see what the subjects are. You’ll also have the Keynote and Industry addresses. Since this blog is more related to “System & Software Design” I’ve been through the pain of downloading all documents of this section and checking the subjects. You may do it for “Chip Design Conference” if you wish, I’m sure you’ll enjoy it. You’ll have one or two documents in each folder. If […]