Hikey 970 board has impressive specifications with Huawei Kirin 970 SoC featuring an octa-core Arm Cortex A73/A53 processor and an Arm Mali-G72-MP12 GPU, coupled with 6GB LPDDR4x and 64GB UFS storage. It’s also one of the first broadly available developer platforms equipped with a Neural Processing Unit for artificial intelligence applications. However when it launched in April, Hikey 970 documentation was lacking, and despite the board is supposed to run both Android (AOSP) and Linux distributions such as Ubuntu or Debian, so far only AOSP is shown in the download section, with Linux distributions “coming soon”. But if you want to start as soon as possible there are still some good news. First, some documentation for the board has been released on Github, including getting started guides, hardware documentation (schematics, user manual, etc..), and some instructions to build AOSP from source code, and flash it to the UFS storage. If […]

A little while ago, I wrote about Imagination’s PowerVR CLDNN Neural Network SDK and Image for Acer Chromebook R13, and some people looks into the Arch Linux Arm image and were pleasantly surprised to find Vulkan drivers, as it was the first Arm platform support Vulkan in Linux. It looks like there are now more Arm hardware supporting Vulkan drivers in Linux, as Arm has released binary user-space components for GNU/Linux and Android for development platforms featuring the Arm Mali Midgard GPU family, and – provided the GPU can handle it – supporting the following APIs: OpenGL ES 1.1 / 2.0 / 3.0 / 3.1 / 3.2, OpenCL 1.1 / 1.2 / 2.0, Vulkan 1.0, and RenderScript. Mali-G71 GPU is supported by Android 8.0 and Linux (fbdev) ARM64 drivers for Hikey 960 board, and Mali-T760 should be supported by Linux drivers (fbdev / wayland / X11) for Firefly-RK3288 board. Hikey […] 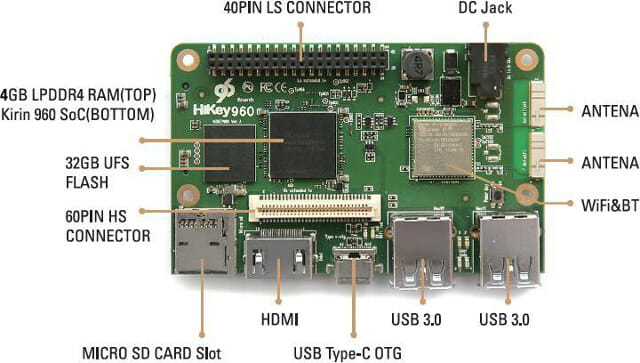 Hikey 960 development board is one of the most powerful Arm boards on the market thanks to Huawei/Hisilicon Kirin 960 octa-core processor with four ARM Cortex A73 cores, four Cortex A53 cores, and a Mali-G71 MP8 GPU, fast storage with 32GB UFS 2.1 flash, and 3GB LPDDR3 memory. Like the earlier Hikey (620) board, the board is also an official reference board for AOSP, so you should be able to run the latest Android version, and also play with sensors using Neonkey SensorHub 96Boards mezzanine board. If you are somehow limited by the 3GB RAM on the board, you can rejoice as Seeed Studio has just launched a 4GB RAM version selling for $249, or about $10 extra. Note that shipping is only scheduled for February 2, 2018, so those are pre-orders. The rest of the specifications for Hikey 960 4GB RAM version are unchanged: SoC – Huawei Kirin 960 […] 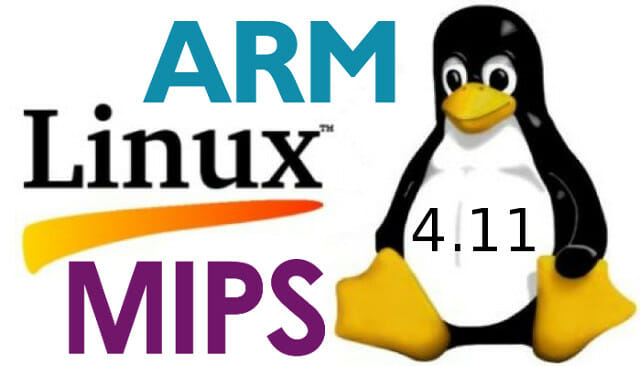 Linus Torvalds has just released Linux 4.11: So after that extra week with an rc8, things were pretty calm, and I’m much happier releasing a final 4.11 now. We still had various smaller fixes the last week, but nothing that made me go “hmm..”. Shortlog appended for people who want to peruse the details, but it’s a mix all over, with about half being drivers (networking dominates, but some sound fixlets too), with the rest being some arch updates, generic networking, and filesystem (nfs[d]) fixes. But it’s all really small, which is what I like to see the last week of the release cycle. And with this, the merge window is obviously open. I already have two pull request for 4.12 in my inbox, I expect that overnight I’ll get a lot more. Linux 4.10 added Virtual GPU support, perf c2c’ tool, improved writeback management, a faster initial WiFi connection […] 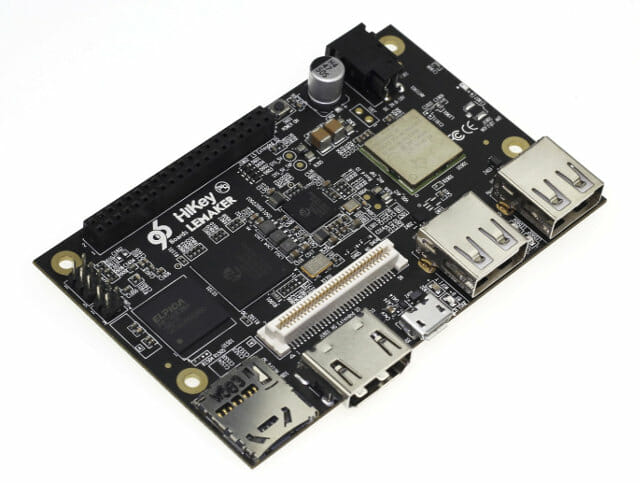 Linaro’s 96Boards initiative was launched at the beginning of the year with Hikey board, and beside the hardware specifications, 96Boards also has some software requirements that include support for “bootloader (open source), accelerated graphics support (binary or open source), a Linux kernel buildable from source code based from mainline, or the latest Google-supported Android kernel version, or the last two LTS kernels, and one of more of the following operating systems: Android, Debian/Ubuntu, Fedora/Red Hat, or an OpenEmbedded/Yocto build of a Linux distribution”. In order to achieve this goal, Linaro introduced the Reference Software Platform for 96Boards, and they’ve now pushed the first Alpha release for Hikey and DragonBoard 410c boards. The release includes a bootloader, the Linux kernel, Debian and AOSP with firmware, source code, and documentation. Some highlights of the Reference Software Platform 15.10 Alpha release include: CE Debian RPB (Reference Platform Build) Debian 8.2 “Jessie” Linux 4.3 […]

Linaro 15.07 has been released with Linux 4.2-rc3 (Baseline), Linux 3.10.83, 3.14.45 and 3.18.17 (LSK), and Android 5.1.1_r8. The Linux kernel got various bug fixes, and a power reduction technique has been implemented for Qualcomm processor. Progress has been made to boot Android with UEFI on Hikey board, and work is still on-going on 96boards including Hisilicon Hikey, Qualcomm DragonBoard 410c, and an upcoming and yet-to-be-formally-announced Marvell PXA1928 board called Helium. Highlights of this release: Linux Linaro 4.2-rc3-2015.07 linaro-android topic updated to 4.2-rc3 and recent AOSP/android-3.18 included GATOR version 5.21.1 llct-misc-fixes topic: “HACK: of: Limit FDT size for CRC check on arm64” has been dropped. FVP model was the last target to require this hack, but the new FVP firmware doesn’t need it anymore updated integration-linaro-vexpress64 topic by ARM LT: Versatile Express TC2 support is back, HDLCD display now works on TC2, the topic will be renamed to integration-linaro-vexpress next […]

Linaro 15.04 has been released with Linux 4.1-rc4, Linux 3.10.79 and 3.14.42 (LSK), and Android 5.1_r3. The Ubuntu image is now based on Vivid instead of Utopic. Android and Debian builds/images have been released for Hikey’s 96boards, Ubuntu Vivid and Android builds have been setup for Qualcomm’s Dragonboard 410c. A new platform, Socionext M8M, has also show in Linaro changelog. I could not find details about M8M, but Socionext is a “new company that designs, develops and delivers System-on-Chip products” and focuses on “imaging, networking and other dynamic technologies”. Their latest press release mentions a 4K media processor with build-in HDMI 2.0 Tx and Rx, so maybe M8M is based on that processor, but I can’t know for sure as they have several chips. Highlights of this release: Linux Linaro 4.1-rc4-2015.05 GATOR updated to version 5.21.1 updated integration-linaro-vexpress64 topic by ARM LT: PCI support added – for Juno r1. Linaro […]