Hikey 960 development board is one of the most powerful Arm boards on the market thanks to Huawei/Hisilicon Kirin 960 octa-core processor with four ARM Cortex A73 cores, four Cortex A53 cores, and a Mali-G71 MP8 GPU, fast storage with 32GB UFS 2.1 flash, and 3GB LPDDR3 memory. Like the earlier Hikey (620) board, the board is also an official reference board for AOSP, so you should be able to run the latest Android version, and also play with sensors using Neonkey SensorHub 96Boards mezzanine board.

If you are somehow limited by the 3GB RAM on the board, you can rejoice as Seeed Studio has just launched a 4GB RAM version selling for $249, or about $10 extra. Note that shipping is only scheduled for February 2, 2018, so those are pre-orders. 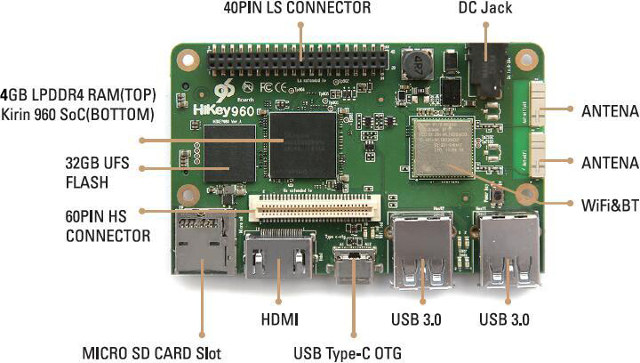 The rest of the specifications for Hikey 960 4GB RAM version are unchanged:

Hikey 960 is purely an Android development platform, as even though there are references to Debian Dekstop/Developer images, there don’t seem to be available for download, so AFAICS there’s no Linux support. Beside information provided in Android developer’s website (linked above), you’ll also find software and hardware documentation on 96Boards Github account.

So what are the chances that that board not supporting linux comes down to the unwillingness of the vendor to bother with linux GPU support?.. Sad.

I would like to see update to Kirin 970. 960 is underclocking too much

The chips are that board alone total well over $100.

Can it run Linux headless (no GPU driver i guess since @blu mentions it)..?

Basically, Linux builds at Linaro. And AOSP builds at 96boards.