Linaro 15.02 has just been released with Linux 3.19 (baseline), Linux 3.10.68 and 3.14.34 (LSK), Android 5.0.2, and Ubuntu Linaro Utopic. Listed changes for Linux Linaro are exactly the same as last month, except they’ve used Linux 3.9 release. Power management tools have been added to their AOSP build, and some work has been done for Android 5.0 on the new Hikey board. Here are the highlights of this release: Linux Linaro 3.19-2015.02 GATOR topic: version 5.20.1 updated integration-linaro-vexpress64 topic by ARM LT (FVP Base and Foundation models, and Juno support) updated topic from Qualcomm LT (ifc6410 board support) updated topic from HiSilicon LT (Hi36xx, HiP04, and X5HD2 families support) updated LLVM topic (the community llvmlinux-latest branch) included ILP32 patch set v3 rebased onto 3.19. Initial tests using syscalls LTP tests done. When using ILP32 userland, a few tests have to be skipped (msgctl07, msgrcv0[1-7], msgsnd01) to avoid the stalls, and to make the testing to complete. No stalls with […] 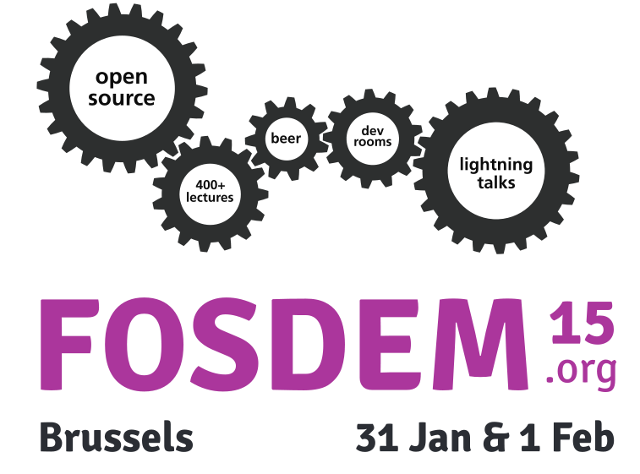 FOSDEM (Free and Open Source Software Developers’ European Meeting) takes place every year during the first week-end of February. This year the developer-oriented event expects to bring over 5000 geeks to share ideas and collaborate on open source projects. Contrary to most other events, it’s free to attend, and you don’t even need to register, just show up. FOSDEM 2015 will take place on January 31- February 1 in Brussels. There will be 551 sessions divided into 5 keynotes, 40 lightning talks, 6 certification exams, and with the bulk being developer rooms and main tracks,  divided into 7 main tracks this year: Languages, Performance, Time, Typesetting, Hardware, Security and Miscellaneous. I’m not going to attend, but it’s still interested to see what will be talked about, and I’ve concocted my own little virtual program out of the main tracks and developers’ rooms. There’s a few minutes overlap between some talks on Sunday.. Oh well. If you won’t be able to […]

Linaro 14.09 has just been released with Linux kernel 3.17-rc4 (baseline), Linux 3.10.54 & 3.14.19 (LSK), and Android 4.4.2 & 4.4.4. Linaro has kept working on their member boards such as IFC6410 (Qualcomm), D01 (Huawei/Hisilicon), Ardnale (Samsung), and Juno (ARM). They’ve also announced they’ll change the tools to build GCC by using cbuild2 instead of cbuild1 for next release, and they’ve enabled a build with gcov (for code coverage analysis) which may mean they’ll work on reducing the kernel size by getting rid off unused code. I’ve also noticed the Arndale and Arndale Octa Ubuntu images are now based on Linux LSK with Mali GPU support since last month. Here are the highlights of this release: Linux Linaro 3.17-rc4-2014.09 GATOR version 5.19 updated topic from Qualcomm LT (ifc6410 board support) and HiSilicon LT updated Versatile Express ARM64 support (FVP Base and Foundation models, Juno) from ARM LT. updated Versatile Express patches from ARM LT updated LLVM topic (follows the community […]

Linaro 14.06 has been released last week with Linux Kernel 3.15 (baseline), Linux Kernel 3.10.44 (LSK), and Android has been updated to 4.4.3. One interesting development this month is that Android for ARMv8 (64-bit ARM) is booting on the fast models using ARM Trusted firmware and U-Boot.  SELinux has been enabled in Android. I could not see much new member hardware, except possibly B2120 (HDK) reference board for STMicro STiH407 “Monaco” STB SoC. Here are the highlights of this release: Linux Linaro 3.15-2014.06 GATOR version 5.18 (same version as in 2014.04) updated basic Capri board support from Broadcom LT cortex-strings-arm64 topic (same as in 2014.02) updated Versatile Express ARM64 support (FVP Base and Foundation models, Juno) from ARM LT. updated Versatile Express patches from ARM LT more HiP0x Cortex A15 family updates from HiSilicon LT (hip04_eth, hip04_defconfig) updated LLVM topic Big endian support (same as in 2014.05) ftrace_audit topic from the Kernel WG (same as in 2014.05) config fragments changes […]

Linaro 14.04 has been released with Linux Kernel 3.14 (baseline), Linux Kernel 3.10.37 (LSK), and Android 4.4.2. More work has been done on ARMv8 support, and big.LITTLE for both the Linux kernel and Android, as well as work on member hardware platforms such as Origen, Arndale, Arndale Octa, Broadcom Capri, and Hisilicon D01 boards. GCC 4.8-2014.04 Linaro is said to include performance improvements. Linaro Android engineering builds for Nexus 7 and Nexus 10 have been setup, but I can’t quite find the images. They’ve also added the BeagleBone Black to member builds. Here are the highlights of this release: Linaro Stable Kernel (LSK) 3.10.37-2014.04 Updates to Android support (from Google and Linaro) Added Big endian for ARMv7 and ARMv8 Thermal framework DT support Huge pages and transparent huge pages for ARMv8 Tagged pointers for ARMv8 Non-coherent DMA for ARMv8 Other Features big.LITTLE support – ARM MP patch set, IKS (ARMv7 only) Power efficient workqueue support Android v3.10 patch set from […]

LinuxCon (North America) 2013 will take place on September 16 – 18, 2013 in New Orleans, LA. The event will be co-located with several other conferences: the Linux Plumbers Conference, the Xen Project User Summit, the OpenDaylight Mini-Summit, the Gluster Workshop 2013, the UEFI Plugfest, the Linux Wireless Summit, the Linux Security Summit, and CloudOpen 2013. LinuxCon consists of 3 days of keynotes, and legal, operations, and developers related sessions as well as tutorials and workshops. There will be around 150 sessions and keynotes during those 3 days. I’ve gone through developer sessions and selected one for each time period. Monday, September 16 10:35 – 11:25 – UEFI and Linux by Kirk Bresniker, HP UEFI has become ubiquitous on the PC client systems and is coming up on servers and ARM-based systems, it is becoming the converged firmware infrastructure. UEFI Secure Boot feature has attracted a lot of attention from the Linux community. Linux distros and Linux Foundation have found […]