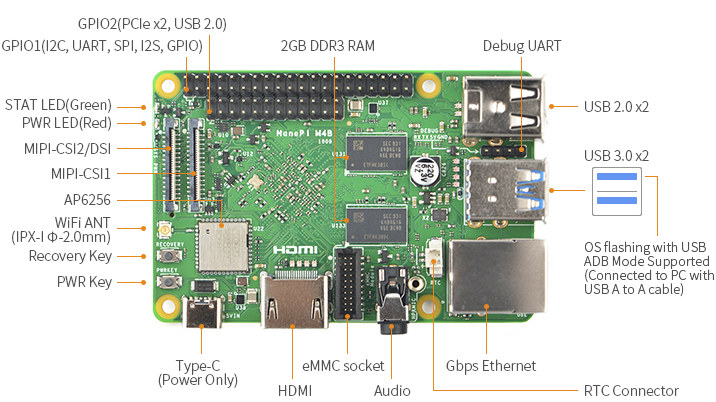 NanoPi M4 was launched last year (2018) as a Rockchip RK3399 SBC following Raspberry Pi 3B+ form factor with 2 or 4GB DDR3 RAM, and was followed by NanoPi M4V2 this September with 4GB LPDDR4 memory, and power & recovery buttons. FriendlyELEC has been working on yet another revision with NanoPi M4B mixing some of the features of M4 and M4V2 such as DDR3 memory and power & recovery buttons, but the biggest change is the removal of the USB 3.0 hub which allowed for four USB 3.0 port, and now the company is going native leveraging the two USB 2.0 interfaces and two USB 3.0 interfaces inside Rockchip RK3399 processor which should lower the BoM cost, and in some cases improve performance. NanoPi M4B specifications: SoC – Rockchip RK3399 big.LITTLE hexa-core processor with 2x Arm Cortex-A72 @ up to 2.0GHz, 4x Cortex-A53 @ up to 1.5GHz, a Mali-T864 GPU with support OpenGL ES1.1/2.0/3.0/3.1, OpenVG1.1, OpenCL, DX11, and AFBC, and […] 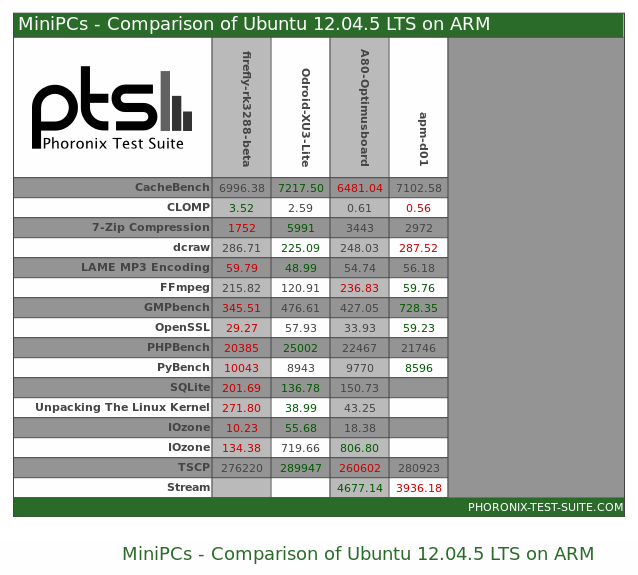 With all these Intel Atom Z3735F been released right now at a price similar to ARM based mini PCs, many people, including myself, are wondering about the performance of the low cost Intel processor against their ARM competitors. Ian Morrison just published some results from Phoronix Test Suite comparing the performance of  Firefly-RK3288 (Rockchip RK3288), ODROID-XU3 Lite (Samsung Exynos 5422 BIN2), and A80 OptimusBoard (Allwinner A80) in Linux (Ununtu 12.04.5), against the performance of MeegoPad T01 (Intel Atom Z3735F) running Linux from a Live CD on a USB drive. Some of the benchmarks failed because Phoronix Test Suite got apparently confused with the file systems located on a USB drive, but at least we’ve got a comparison point, and the results are a bit confusing, as they’re no clear winner. In some tests like FFmpeg, the Intel SoC really crushed the ARM competition being at least twice as fast as Exynos 5422, and about four times faster than RK328 and […] 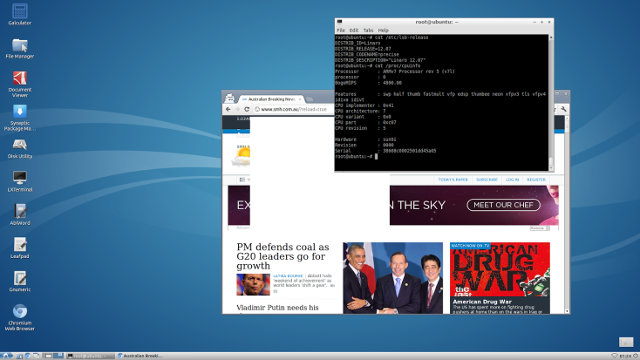 Last month, pcDuino released Android 4.4 and Ubuntu images for pcDuino8 board powered by Allwinner A80 octa core processor, and since it’s the same board layout as A80 OptimusBoard, I decided to try it out, but it failed as the update script would try to flash it to a partition that’s too small for the root file systems. But last week, Ian Morrison and Minidodes gave it another try, and successfully booted Ubuntu, or more exactly Lubuntu, on A80 OptimusBoard. Both their screenshot reports sun9i platform in /proc/cpuinfo, so that’s definitely Allwinner A80, but only one core is shown. I’m not sure if it’s because the other are idled and don’t show, or for some reasons, the kernel only supports one core at this stage. Anyway, here’s how they did to install Lubuntu: Flash the kernel (pcduino8_kernel_livesuit_20141008.img) with PhoenixCard or Livesuit first. See instructions to use Livesuit with A80 OptimusBoard. Extract the rootfs (pcduino8_ubuntu_20141008.rar) to an SD card or USB […] 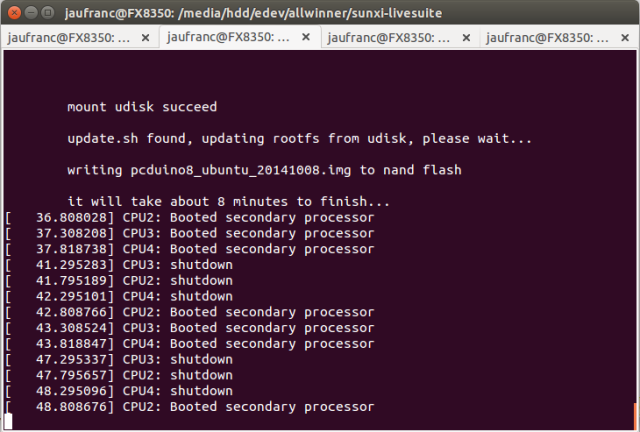 pcDuino8 and A80 OptimusBoard are the only two Allwinner A80 development boards currently “somewhat” available, and albeit the PCB color is different, every else is basically identical, and pcDuino8 firmware should probably run on A80 OptimusBoard and vice versa. If you own any of these boards, you may interested in two images, one with Android 4.4 (beta), and one with Lubuntu, recently released by pcDuino / Linksprite. Android 4.4 (beta) 2014-10-08 – sun9iw1p1_android_optimus.img to be flashed with PhoenixCard (Windows) or Livesuit (Linux) Lubuntu 14.04? 2014-10-08 is comprised of two files: Kernel – pcduino8_kernel_livesuit_20141008.img to be flashed with PhoenixCard or Livesuit first. See instructions to use Livesuit with A80 OptimusBoard. Rootfs – pcduino8_ubuntu_20141008.rar. First extract the rar files to the root of an SD card or USB flash drive. There should be two files: pcduino8_ubuntu_20141008.img and update.sh. Now connect the mass storage device to pcDuino3 / A80 Optimusboard, and reboot the board to flash the image to /dev/nandd automatically. The serial […] 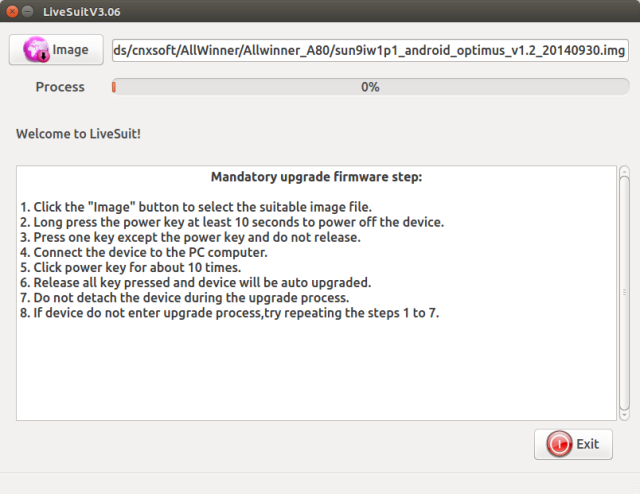 After informing Allwinner I had some rather slow write speed (3MB/s) to the NTFS partition of my USB drive on my A80 OptimusBoard, they kindly provided a new compressed Android firmware image (sun9iw1p1_android_optimus_v1.2_20140930.img.7z) with some NTFS optimizations that can be downloaded from baidu (password: x2tz), mega.co.nz or simos.info (please only use this link, if the other two do not work as it’s a private website and monthly bandwidth may be limited). I vaguely remember tools like LiveSuit (Linux) or PhoenixSuite (Windows), and I ended up on sunxi-linux Livesuit wiki as I’m running Ubuntu 14.04 on my PC, but you should be able to flash the firmware with PhoenixSuite if you run Windows. The instructions below can also be used for other Allwinner based devices. First you need to install LiveSuit, and build Allwinner USB drivers as follows: In order to use LiveSuit as a normal user, you also have to create /etc/udev/rules.d/50-awusb.rules with the line: Finally, we can start the […] 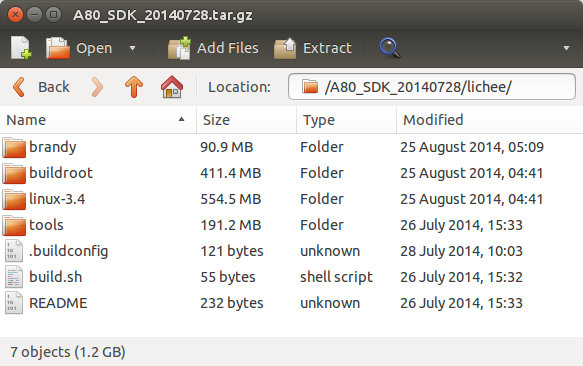 After Android 4.4 SDK for AllWinner A31 last week, another AllWinner software development kit has been seen in the wild, this time for the new AllWinner A80 octa-core processor. A80 SDK includes source code for the Linux Kernel and U-boot, as well as buildroot, and various AllWinner tools. I’ve also noticed AllWinner A80 datasheet is available, but with the strict minimum information (45 pages). Let’s get the code, and extract it: Now we need to configure the build: sun9i is the codename for AllWinner A80, not sure what w1p1 means. Dragonboard must be the internal Allwinner development board, but I just selected Linux, since the SDK does not come with Android, and finally I opted for optimus, which could stand for OptimusBoard. You may need to install extra dependencies in your build machine, for example (in Ubuntu 14.04): Now let’s start buildroot which should retrieve the toolchain, and build u-boot and the Linux kernel: So it’s looking for Linaro gcc […]