This is the last day of the year, and just like in 2012, I’ll look back on the main trends of this year,  post a list of the top 10 posts of 2013 on cnx-software.com, and add some fun stats about the site and my visitors. 2013 has been the year of quad core media players and mini PCs, especially those based on Rockchip RK3188, XBMC is now featured in many Android STBs, “big.LITTLE” and “Octa-core” have been the buzz words on the application processor front, Google has entered the HDMI TV sticks market with the ChromeCast, and is competing with Miracast / DLNA TV dongles, we’ve gotten more and more low cost Linux development boards, crowdfunding has almost gone mainstream, and the Internet of things has started to take off thanks to new technologies such as Bluetooth Low Energy. I’ve compiled the list using data from Google Analytics, filtered […]

PicUntu 4.5 installer is probably the easiest method to install Ubuntu on a Rockchip RK3188 based mini PC, but if you want a little more flexibility I’ll provide another method to install Linux on T428, MK802 IV or compatible devices, as well as links to go further: dual boot Android / Linux, create your own official distro, status of Mali-400 GPU support in RK3188… The method below is not new, as it was posted by Linuxium (Ian Morrison) in Freaktab in September, but this is the first time I’ve taken the time and managed to run Linux on Rockchip RK3188, and I’ll provide some more detailed steps. Prerequisites Even though in some cases it’s possible to install Rockchip firmware from Linux, AFAIK the tools available in Linux lack supports for the parameter and loader files, so ironically, you’ll need a Windows XP/7/8 machine to install Linux in your mini PC. […] 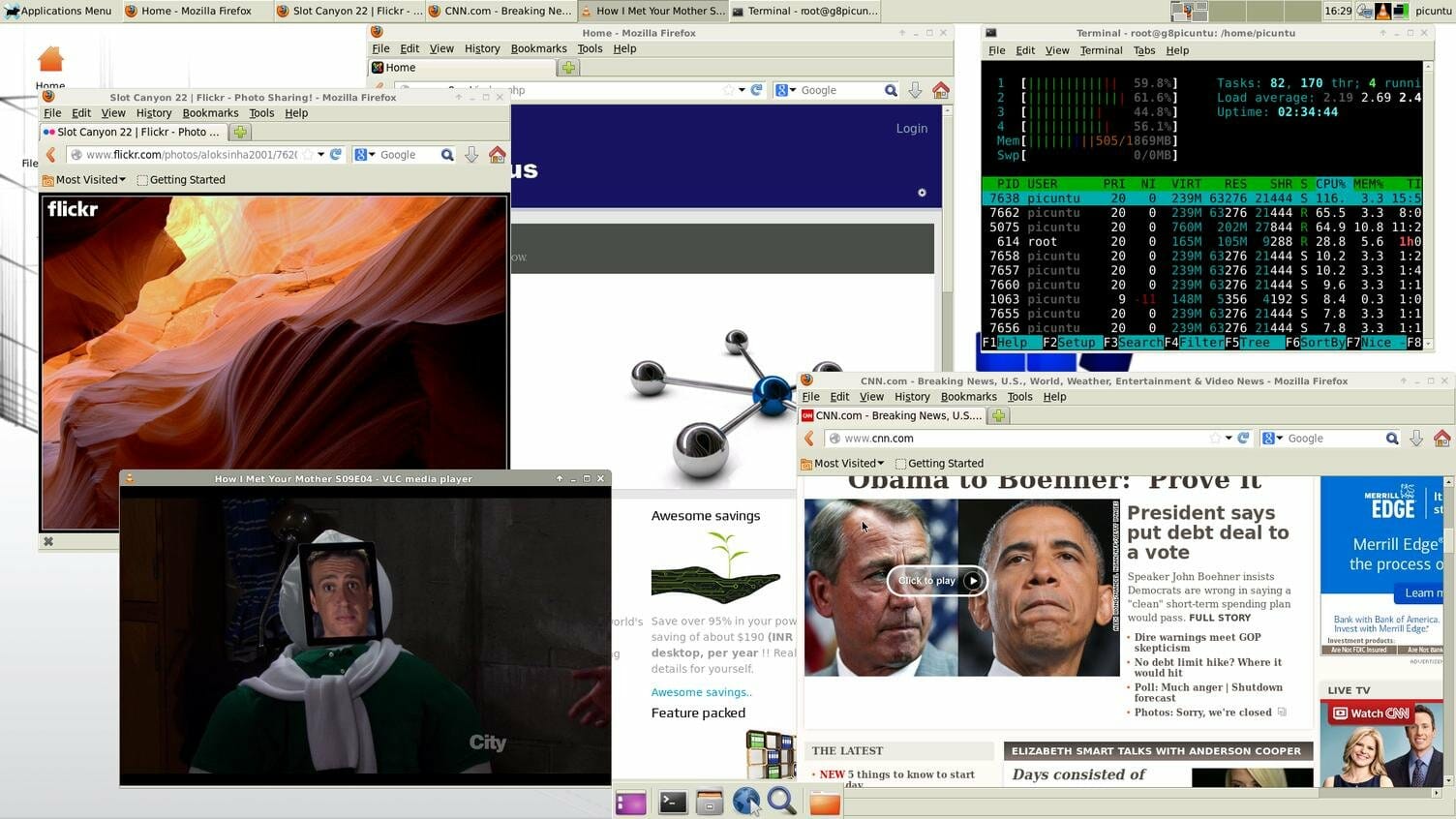 At the beginning of the year, PicUntu had been released for Rk3066 HDMI TV sticks, but as quad core devices  based on RK3188 became popular, work started as soon as the source code was available, and a preliminary version of Linux ran on some RK3188 devices in June.  After 4 more months  of development an installer for PicUntu 4.5 has been released to allow users to run a customized version of Ubuntu 13.04 on RK3188 HDMI TV sticks or set-top boxes such as T428 or Rikomagic MK802 IV. The installation procedure appears to be easier than earlier version, as there’s only one installer file (247 MB), and you can complete the installation to the NAND flash of your device with just 4 clicks. PicUnutu runs xfce4 desktop environment,  supports more than 200 drivers,  multiple file systems (nfs, ntfs, cramfs, cifsutils, smb…), lots of different USB devices, serial devices, GPS devices, […] 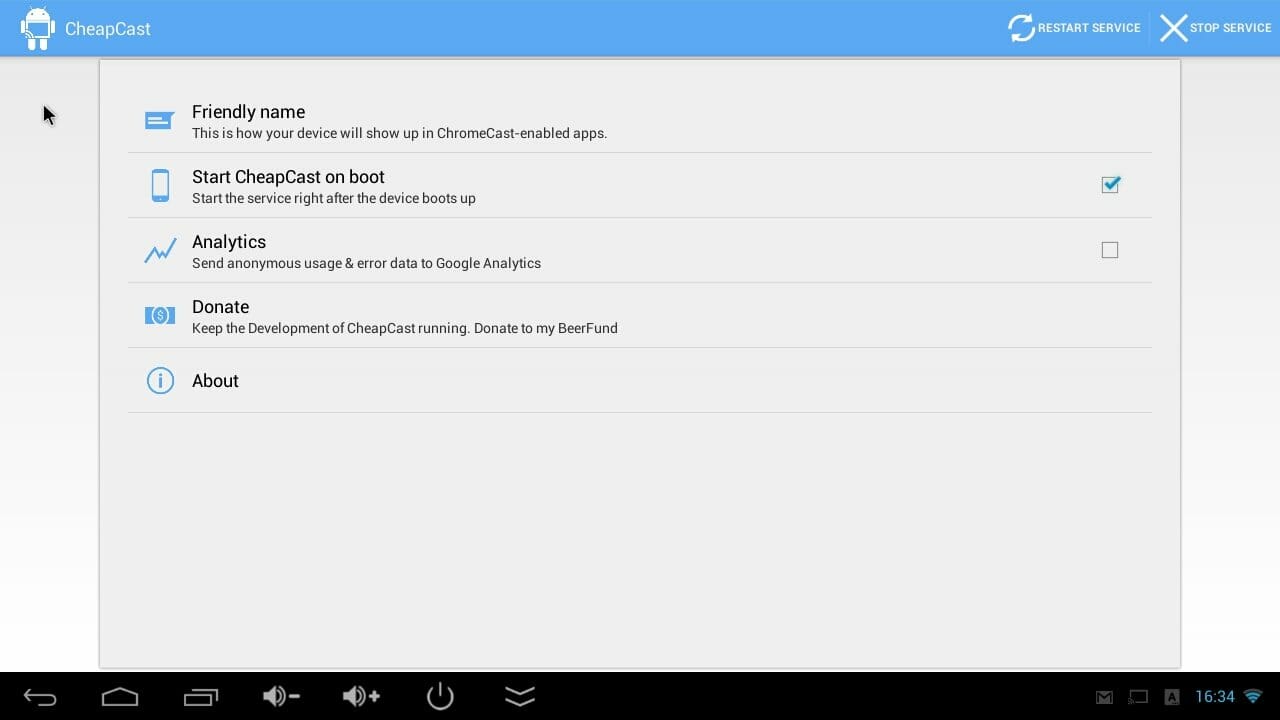 Yesterday, I wrote developers were working on making any media App and any Android device compatible with Chromecast. Sebastian Mauer has taken care of the latter, by publishing CheapCast (Beta) in Google Play. Several people have been trying it successfully, including in iMito MX1 mini PC. I’ve been less lucky. I’ve tried it by running YouTube App in Zopo ZP900S smartphone (Android 4.0.4) with 4 devices: Tronsmart T428 – “Works” but the video won’t start playing. (Bug reported in Github’s issue tracker) [Update: It now works with the latest version in Google Play]. MK908 – Refused to install anything in Google Play today… (Older Android 4.1 firmware) Wandboard Quad – “Works” but the video won’t start playing. CX-01 – CheapCast will crash when playing video I can’t really play YouTube videos over 360p without buffering here, so the reason the video won’t start in T428 or Wandboard Quad might be […]

After the release of the RK3188 Linux kernel source code last week, Ian Morrison (Linuxium) has managed to boot Ubuntu 12.04 with XFCE desktop on Tronsmart T428. However, as Tronsmart refused to release their source code, further Linux development is likely to happen on Rikomagic MK802 IV, because Rikomagic released the code for their device, so development work will be easier. AFAIK, this is the first time Linux boots natively on RK3188 devices, so it’s still early stage (no Wi-Fi, Bt or graphics acceleration), but if you still want to give it a try here are the instructions (for T428):] Create a SDCARD with an Ubuntu 12.04 root file system on it and ensure it is labeled as “linuxroot” (Visit Slatedroid for details) Flash your RK3188 minipc with rooted stock 4.1.1 ROM. (May not be needed if you ROM is already rooted) Boot Android, and install Android Terminal Flash t428-3.0.36-linuxium-test+-kernel.img […]

Android mini PCs ( HDMI TV dongles) are great to make your TV smart, and you may expect to be able to play Android games on your TV easily. The reality is that the keyboard and mouse, or remote controls used with those devices, are not suitable for games, and most games do not play at all. Of course, OUYA and GameStick projects will take care of this, as well as the recently available Project SHIELD ($349) , but if you already have one of those mini PCs, you may not want to spend the money for another device. Luckily there’s a solution, and with some efforts, you can play many games, but not all, with a PS3 Bluetooth controller connected to your Android mini PC or Set-Top Box. I decided to give it a try by buying “GOIGAME Rechargeable Bluetooth Wireless DoubleShock III Controller for PS3” for $16.60, which […]