After the release of the RK3188 Linux kernel source code last week, Ian Morrison (Linuxium) has managed to boot Ubuntu 12.04 with XFCE desktop on Tronsmart T428. However, as Tronsmart refused to release their source code, further Linux development is likely to happen on Rikomagic MK802 IV

, because Rikomagic released the code for their device, so development work will be easier.

AFAIK, this is the first time Linux boots natively on RK3188 devices, so it’s still early stage (no Wi-Fi, Bt or graphics acceleration), but if you still want to give it a try here are the instructions (for T428):]

It’s safe to try as those instructions should not affect your Android installation.

Ian also ran some benchmarks from Phoronix Suite to compare Linux performance in a chroot in Android via Linux Complete Installer (T428-ubuntu-complete) and native Linux (t428-linuxium). The third column is for an RK3066 mini PC (iStick A200) running Linux natively. 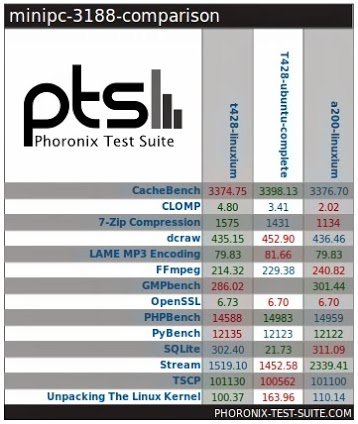 None of those tests do not require a graphical interface, and results are pretty close. Native Linux has a slight advantage with many of them, but for some reasons Linux running in Android appears to have a clear edge for PyBench.

PicUntu developers are already aware of this progress, so you can expect RK3188 PicUntu soon. Further details are available on Mini PC G+ Community including logs, kernel config, and some documentation.

@onebir
They must be a bit different, at least with regards to the Wi-Fi module.

I’ve added the recoverey kernel image and the lib modules with instructions on how to download and install at https://plus.google.com/u/0/109451178006683865932/posts/jdUWmMKudJa so with these and the instructions above you should be set to take Ubuntu out for a spin – please note it is my first development cut and not everything will be working.

I wonder why the MK802 IV’s aren’t getting reduced like the others? They still go for $84+ (inc shipping, exc vouchers)…

I think the best for Linux are Realtek one’s since the driver is supposed to work. For others, you may need to use an external Wi-Fi or Ethernet USB dongle for get Internet access.

Somebody needs to get it running on the Giayee TVB103 http://www.cnx-software.com/2013/06/14/rockchip-rk3188-based-giayee-tvb103-android-tv-stb-features-vga-and-hdmi-video-output/

@eebrah
For which we haven’t even yet got price or firm availability dates, let alone info on wifi chipset 😉

I would simply like to express my gratitude to you for putting in all of the time and energy to make this possible.

I’ve purchased two T428’s to use as public computers and I just can’t swing it with the Android OS.

I really look forward to WiFi working (I really hope we get there).

I’m interested in donating a couple cups of coffee if you would be so kind as to provide a donate link.

Thanks a lot,
Bob

> “However, as Tronsmart refused to release their source code”

Isn’t it mandatory for them to release their source-code considering the GPL license ? (http://gpl-violations.org/ )

@ade
Yes, it’s mandatory. But since it’s apparently pretty difficult to enforce the license, they usually get away with it. Most companies just do like Tronsmart, or least delay the GPL release as much as possible.

@onebir
You can always try http://openbenchmarking.org, but the search engine does not seem very good (I can’t find RK3066 nor RK3188 results), and the site not so user-friendly.

Otherwise run Phoronix Test Suite on your Linux-based x86 computer, and RK3188 devices and you can compare it.

I found a few comparisons here too:
http://computingcompendium.blogspot.com/p/arm-vs-intel-benchmarks.html
If there’s approximate consistency across the Antutu and Geekbench benchmarks, I think this implies an RK3188 is about 50-60% as powerful as a Core i3. & 50% more powerful than a D525.

I’m so curious about the video performance from the t428 under Ubuntu, sinds its giving so much trouble under Android…

@mi643
No video playback in Ubuntu (or software only, meaning 720p max).
What video playback issues are there with T428? I did not see major issues, except if you play video from network (passable Wi-Fi performance).

A lot of people are complaining about stuttering/frame skipping in HD video and streaming from Netflix. The funny thing is, the stuttering stops when you move the mouse.. But i can’t check it for myself, my device is on the way ;). You can find more info at freaktab.

@mi643
please, are you sure that the stuttering is with t428?
i read similar issue with mk802iv, with mouse moving all play perfect, it’s a firmware issue. if confirm that it’s also in tronsmart, please give me the url, i want know if it’s with stock rom/version or custom. If afect many sticks, maybe it’s a bug in rockchip base kernel.
I hope that it’s not rockchip rk3188 base kernel, because i dont see many updates of them, so we must wait longer.

@Klein Some people are saying it’s a rockchip failure, i don’t know. I have only did some research on the T428, because i ordered one. You can read the story’s on the freaktab forum, just Google it, you will find it ;). The latest news is that optimizing for the chip is on the way….lets hope so.. Quote, 1 perfectly optimized high Retina retina screen resolution (2048 * 1536), smooth operation with up to 60 full frames / second, improved significantly; 2, optimized GPU performance graphics processor, a large number of frames to run 3D games increased 30%, reaching the… Read more »

I have the mk908 and it’s a bit of a piece of shit. On latest finless rom 1.5 and it still drops frames enough to make it too annoying to watch anything. Hulu lags like crazy also, must be getting no more than a couple frames per second. Basically, there’s no point using it because i will get a perfectly smooth video just plugging my hd into my tv. Epic fail unless you really love playing angry birds on a big screen.

You say MK908 it’s the 4 core 2GB one. But can’t find any good post telling how to get picuntu or Ubuntu to run on it.

It would be nice to have Ubuntu server running on this one with 4 cores and 2GB of RAM.

I guess you are using the Wi-Fi on it. Get a USB to Ethernet adapter. Works very good then.

Hi ,
Apologizing about the questionI am a newbe
can any one tell me how to execute step 4.

i have connected my usb ethernet and it does not work.
any tips?

`nvm/.. it didnt have native drivers..mb

after a week of continuously installing, buying stuff, bringing it back, im out of idears. My mk802 and zeals are both compatible with em1010 devices, but this one isnt. I tried several usb ethernet cards but they all didnt work, and when i tried to make the proper drivers, it complained about not beying able to find it in modules/3.0.36+ .. i downloaded several module packages but that didnt help. without usb internet i cant use this device at all and im about to sell it.. what usb device has native support? or how can i get this make to… Read more »

@jh
So you’ve built the module, right? What happens when you type “insmod [module_name].ko”?

@Raymond Day
sorry to hijack your question, but i havent been able yet to install picuntu on my t428.
I forgot where i got the image i tried but that is picuntu-linuxroot-0.9-RC2.2.tgz (175mb)
I also found a PicuntuInstaller.apk which i havent tried yet because i assume that will be a native install.
Could you link me to the image you use?
And what kernel do you use?
The only kernel i get working is t428-3.0.36-linuxium-test+-kernel.img @ 11.072mb
Both the picuntu recovery image from recovery.img.7z @ 10.862.592mb packed and kernel-0.3.img @ 8.048 mb did not boot for me.

The link is here:

He tells it super good how to install picuntu on the Tronsmart T428 it works. But I can’t get Apache or MySQL to run on it.

@Raymond Day
I installed the image but it doesnt boot. What kernel are you using?

Also, perhaps installing xamp might be a solution to your mysql problem.

The first time it boots you have to wait 3 to 4 min. For it to come up. After that it will take about 30 sec. to come up.

The Ethernet adapter I am using is a Belkin model usb300m it cost about $25 but seems like the drivers are all way built in to Linux for it.

I still can’t get MySQL to run.

Got mine booting off a USB hard drive. It’s neat that it can on a SD card or USB drive. Same install way.

Here is a Amazon link to the Linksys by Cisco Model No: USB300M:

I thought this would be good to install easy the things I wanted:

But can see it said it failed.

I don’t know I my just start over fresh again.

Then run tasksel the 1st thing after I become root and get a IP.

@Raymond Day
thanks for the usb device advice,.. ive seen your ‘guide’ in the other thread as well, so i should be able to fix that too. Ive ordered the device so i should then finally be ablt to make some progress (allthough i guess i will still need to be able to use make)

a shame xampp didnt work out. That usually works out of the box quite well

@Raymond Day
just did another clean picuntu attempt, but no luck, only 4 pinguins for 10+ minutes.
the keyboard leds do work though, so something is initialized.

my requirement is to get this or any similar device to make it work with TouchScreen LCD, like digital Signage, any help on this matter??

BTW, is there any prospect of later Ubuntu (or whatever) versions on these RK3188 devices? Some packages don’t tend to get backported to 12.04 🙁

Will you please add support for the CX-919!!? It has teh same gpu and cpu! Id love to get steam running on this lil guy!

Look at this device! HDMI, VGA, 2xUSB, LAN, (no wifi), esata. Perfect mini pc for servers or other applications. Telnet port open, No root access available yet to install other software :-(((

@sweet home
Looks nice, but if you can’t install other packages, it can only be used for its main purpose: video record from IP cams.
Which hardware is it? I doubt it’s RK3188. they mention Linux and dual core DSP. It must be a specific chipset to be able to encode 8 channel 1080p simultaneously.