Github has announced the release of Github for Windows, a client that makes it easy to use Github in Windows XP, Vista, 7 and the upcoming Windows 8. To get started, download GitHub for Windows. After the first part of the installation procedure, it will go through 2 eye raising steps: 1- Restart your computer, 2- Start Internet Explorer automatically (to complete the installation). Then you’ll just need to enter our credentials (or register) to get started with Github. It will automatically scan your local git repositories and ask you if you want to add then to Github. It will also show your Github repository as shown below. If you want to clone other people Github repositories, you’ll need to go to github.com, select a repository and click on “Clone in Windows” button (See below) This will start cloning the repo in C:\Documents and Settings\User\My Documents\GitHub directory (default) and show the progress in Github Windows client. Once a repository is […]

Leap Motion is a tiny USB device, about the size of a thumb drive, that let’s you control your computer with hands and fingers (and even pencils) gestures in three dimensions using motion sensing and motion control technology. The company claims that Leap technology is 200 times more accurate than existing solutions with an accuracy up to 0.01 millimeter (which seems over the top). To use the LEAP, simply plug it into a USB port, install Leap Motion software, calibrate the device and you’re ready to control your PC a la minority report. This technology will probably not displace the mouse and keyboard, as your arms would get very tired after a while, but there are some good use cases: Stylus emulation and 3D images creation. Gaming. 3D modeling software interaction. Sign a document digitally with a pen. User interaction in Windows 7/8 or Mac OS X: Clicking, grabbing, scrolling, pinch to zoom, etc… Surgeons can control 3D medical data […] 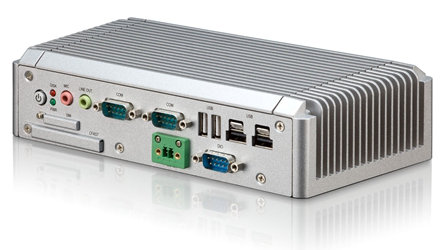 VIA Technologies has just unveiled the VIA AMOS-3002, a fanless system based on VIA EPIA-P900 Pico-ITX board, targeting embedded applications such as telematics, in-vehicle control, machine to machine controller (M2M), digital signage and kiosks. The VIA EPIA-P900 Pico-ITX board is powered by VIA Eden X2 dual core processor (1GHz) together with VIA VX900H media system processor (MSP) and VIA Chrome 9 video processor which render VIA AMOS-3002 systems capable of handling hardware video decoding for MPEG-2, WMV9 and H.264 codecs at 1080p resolution. Two models are available: AMOS-3002-2D10A1 and AMOS-3002-2D10A1. The latter features a 2.5” SATA hard disk drive bay which is not available in AMOS-3002-2D101A1. Here are the specifications for both VIA AMOS-3002 Models: CPU – VIA Eden X2 @ 1.0GHz Chipset – VIA VX900H Media System Processor Memory – 1x DDR3 1066 204-pin SODIMM socket (Up to 4GB) Storage: 1x CFast Flash disk socket 1 x 2.5” SATA hard disk drive bay (Model AMOS-3002-2D10A1 only) Graphic Controller – Integrated […]

The Tizen Technical Steering Group has announced, today, the release of Tizen 1.0 “Larkspur”. Tizen 1.0 release provides several new SDK features and improvements including: Simulator: A new browser-based tool that supports the Tizen APIs and allows you to run and debug your web applications, and simulate running applications with various device profiles. IDE: Enhancements include more flexibility around templates and debugging tools. Emulator: Significantly improved emulator performance through Intel’s Hardware Acceleration Manager for Windows and OpenGL acceleration for Linux. Updates to the platform source code include: Web: Support for additional features of W3C/HTML5 specification Location: Support for POI (Point of Interest) and route search Connectivity: Wi-Fi Direct key features added You can see the full list of changes by reading the release notes for the SDK and the source code. Tizen has also added a bug tracker and a wiki for the community and a few back-end changes have been made in order to improve stability and scalability of the […]

Back in January, Tizen preview SDK and source code was made available. Today, Tizen has released the beta source code and SDK. Here are the main changes compared with the code preview: SDK support for Windows, in addition to Ubuntu SDK source code is now available Tizen Web UI framework extends jQuery Mobile to make developing web applications easier with optimized widgets. Tizen Web API provides more features, such as setting an alarm, accessing media contents, retrieving system information, and more. Tizen uses a bootloader based on U-Boot. The Tizen team emphasizes that this version is Beta and that it is not yet designed for use to create production applications. Since Windows is now supported, the development machine requirements have slightly changed as follows: Ubuntu 10.04/10.10/11.04/11.10 32-bit, Windows XP SP3/7 32-bit (Mac version will be available soon) At least dual-core 2 GHz CPU (recommend VTx supported by CPU) At least 2 GB of RAM memory At least 3 GB of […]

I had a VDI image set to 8GB that was nearly full and re-sized it to 16 GB with the following command: “C:\Program Files\Oracle\VirtualBox\VBoxManage.exe” modifyhd  “C:\Documents and Settings\Jean-Luc\VirtualBox VMs\Debian 6.0.3\Debian 6.0.3.vdi” –resize 16384 16384 is the new virtual harddisk size in MB (16 GB). This will increase the size of the Virtual disk. However, it won’t increase the size of the partition in your virtual disk. You have then 2 solutions: Create a new partition with the extra free space Use Gparted Live ISO image to increase the size of your current partition. Jean-Luc Aufranc (CNXSoft)Jean-Luc started CNX Software in 2010 as a part-time endeavor, before quitting his job as a software engineering manager, and starting to write daily news, and reviews full time later in 2011. www.cnx-software.com Support CNX Software – Donate via PayPal or cryptocurrencies, become a Patron on Patreon, or buy review samples 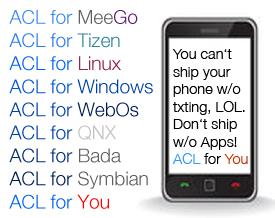 OpenMobile World Wide Inc. is demonstrating its Application Compatibility Layer (ACL) technology, capable of running Android apps on non-Android devices at CES 2012 in Las Vegas. The company claims that their solution brings more than 300,000 Android apps to device running on other platforms. The technology allows OEMs of Tablets, Set Top Boxes, smart TVs, Netbooks, In-Vehicle Infotainment devices and more to provide users access to a all Android applications. OpenWorld ACL technology currently works on tablets, STBs and netbooks based on MeeGo, WebOS and Ubuntu. The company also plans to make the technology available for Tizen, Windows, Bada, QNX, Symbian and more. The company claims 100% compatibility for Android apps including those developed using the Android Native Development Kit (NDK). The ACL layer is said not to drain the device resources at all. Device power and memory will be unchanged. Here are the Key Benefits of ACL according to OpenMobile: ACL destroys the App barrier ACL is 100% compatible […]

If you are developing software in Windows XP, Windows Vista or Windows 7, here are the steps to follow to push your project to Gitorious. Register and create a new project on Gitorious, if you haven’t done already. Install msysGit to have git on your Windows machine Click on “Git Bash” to start the command line Generate the SSH Key with “ssh-keygen -t rsa” and  press ‘Return’ in every question. Go to your Gitorious dashboard, click on “Manage SSH Keys” then “Add SSH Key“, copy the content of “cat ~/.ssh/id_rsa.pub” in Gitorious and click save Then go to your local project directory and follow the “getting started instructions” given in Gitorious, which should look like: git config –global user.name “Your Name” git config –global user.email “[email protected]” git checkout master git remote add origin [email protected]:your-project/your-project.git git push origin master Then wait until the code is pushed to the Gitorious server. If you also installed ToitoiseGit on your development machine, you may […]