NXP i.MX 8 series family offers plenty of options from the i.MX 8X Cortex-A35 processor to i.MX 8QuadMax octa-core processor with two Arm Cortex-A72, four Arm Cortex-A53, and two Arm Cortex-M4F cores. We already covered plenty of i.MX 8  hardware on CNX Software, including a fair amount of i.MX 8QuadMax systems-on-module such as Toradex Apalis iMX8, iWave Systems iW-RainboW-G27M SMARC 2.0 SoM, Advantech ROM-7720 Qseven 2.1 computer-on-module, and others. But for some unknown reasons, there haven’t been that many i.MX 8QuadMax single board computer, and AFAICR we only wrote about Seco SBC-C43 board so far. But there’s now another option thanks to iWave Systems iW-Rainbow-G27S Pico-ITX SBC equipped with a choice of i.MX 8QuadMax or i.MX 8QuadPlus processor and up to 8GB RAM. iW-Rainbow-G27S specifications: SoC (one or the other)— NXP i.MX8 with VPU and HiFi4 DSP: NXP i.MX 8QuadMax with 2x Cortex-A72 cores, 4x Cortex-A53 cores, 2x Cortex-M4F real-time cores, 2x Vivante GC7000XVSX GPU, HiFi 4 DSP NXP i.MX […] 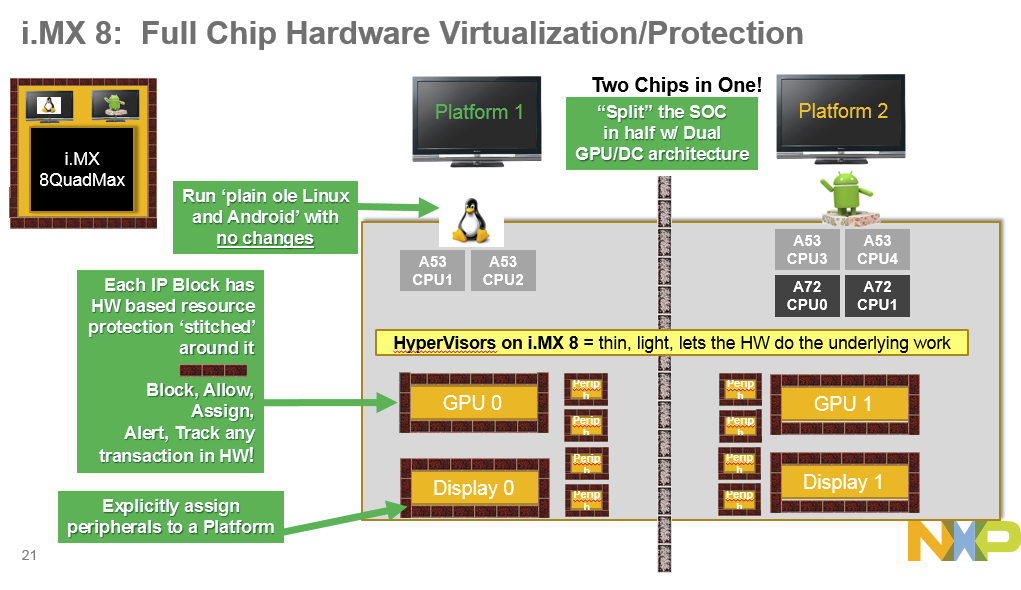 Freescale and then NXP have been talking about i.MX8 processors for several years, and this spring unveiled i.MX 8 Multisensory Enablement Kit without giving much details about the processor except it would include both Cortex A72 & A53 cores. But NXP put out a press release yesterday about “Multisensory Automotive eCockpit Platform to Advance Multimedia Experiences in Future Cars” which appears to be the same news but with different words, except the content of the PR has more interesting bits such as: The new family, which is based on up to six 64-bit ARMv8-A technology processor cores and includes a HiFi 4 DSP, LPDDR4 and DDR4 memory support as well as dual Gigabit Ethernet with audio video bridging (AVB) capability, is designed to advance automotive dashboard graphics such as instrument clusters, infotainment visuals, heads-up displays, rear-seat screens and more. Capable of driving four HD screens with independent content or a 4K screen, the new devices introduced today include: i.MX 8QuadMax […]

Linus Torvalds announced the release of Linux Kernel 3.16 over the week-end: So nothing particularly exciting happened this week, and 3.16 is out there. And as usual (previous release being the exception) that means that the merge window for 3.17 is obviously open. And for the third time in a row, the timing sucks for me, as I have travel coming up the second week of the merge window. Many other core developers will be traveling too, since it’s just before the kernel summit in Chicago. So we’ll see how the next merge window goes, but I’m not going to worry about it overmuch. If I end up not having time to do all the merges, I might delay things into the week of the kernel summit, but I’ll hope to get most of the big merging done this upcoming week before any travel takes place, so maybe it won’t come to that. So this is just a heads-up that the […] 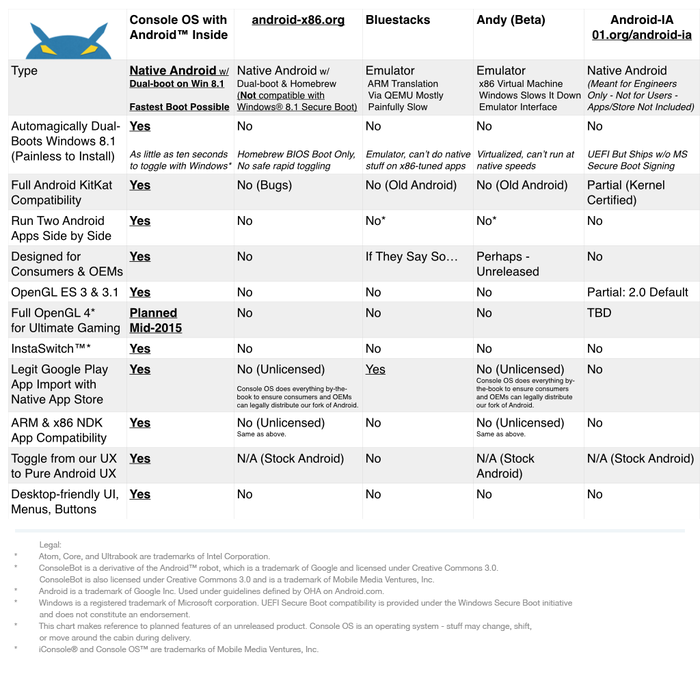 There are already various solutions to run Android on Windows PC powered by Intel processors either going the emulator route, for example with BlueStacks or AndroVM (now Genimotion), or the native route with solutions such as Android-x86. So when I read Console OS, a port of Android capable of running along side of Windows, was looking for funds on Kickstarter to complete the project, I was perplex. But looking into details, it seems Console OS may indeed bring improvements to existing solutions, and Mobile Media Ventures, the company behind the project, released the following table comparing Console OS to other Android ports. If like me you had never heard of Andy Android, here’s the link to the project. Android IA is Intel ports of Android, which currently targets developers. So according to the developers, Console OS makes installing and dual-booting Android on a Windows PC easy, brings full Android Kitkat compatibility, allows you to run two Android apps side by […] 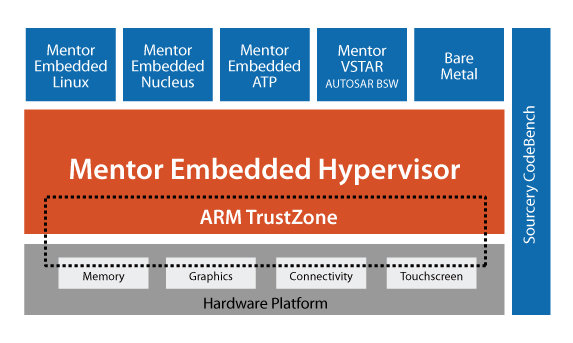 Virtual machines are usually run on server or desktop PC to run several operating systems simultaneous. About 2 years ago, I wrote about an embedded hypervisor running Linux and Android on the Pandaboard develompent board, with the goal of separating home and enterprise operating systems in mobile devices so that enterprise data is safe. Since then, virtualization extensions are now part of ARM Cortex A15 / A7, and as well as the new Cortex A53 / A57 ARMv8 64-bit cores, but in my mind at least, those where mostly designed to address the server market. It turns out hypervisors are also useful in the automotive field, where for example, the dashboard and In-vehicle infotainment (IVI) systems runs in two separate virtual machines controlling two different displays from one processor. Mentor Embedded showcased such automotive system at ARM Techcon 2013, where they showed a Freescale i.MX6 quad core board, which looks like Freescale SABRE Lite development board, running their embedded hypervisor […]