There are already various solutions to run Android on Windows PC powered by Intel processors either going the emulator route, for example with BlueStacks or AndroVM (now Genimotion), or the native route with solutions such as Android-x86. So when I read Console OS, a port of Android capable of running along side of Windows, was looking for funds on Kickstarter to complete the project, I was perplex. But looking into details, it seems Console OS may indeed bring improvements to existing solutions, and Mobile Media Ventures, the company behind the project, released the following table comparing Console OS to other Android ports. 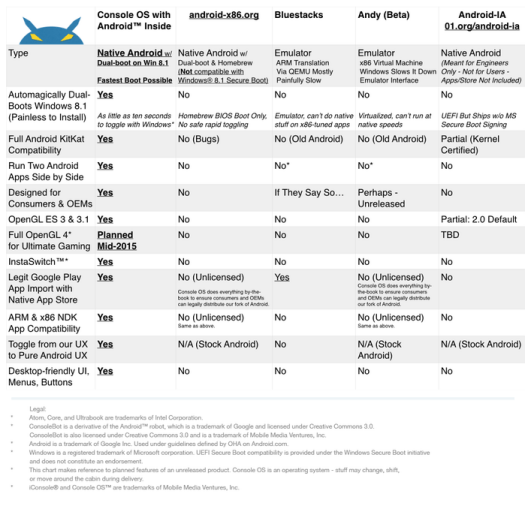 If like me you had never heard of Andy Android, here’s the link to the project. Android IA is Intel ports of Android, which currently targets developers.

So according to the developers, Console OS makes installing and dual-booting Android on a Windows PC easy, brings full Android Kitkat compatibility, allows you to run two Android apps side by side, supports the latest OpenGL ES 3.x API, and soon OpenGL 4.x for games support, provides ARM & x86 NDK compatibility, and the user interface has been modified to be desktop friendly. It won’t support Google Play, but the company claims you’ll be able to import free and paid apps via a “Console OS Connector” app. You’ll also be able to download and install apps via Amazon Appstore and their own Console Store.

That’s for the free as in beer Console OS standard version. There will also be Console OS Pro with a few more features namely:

You can see some of the features in action, as well as a demo showing Console OS Pro on an Intel PC compared to a Google Android Tablet playing the same game in the video below.

They plan to sell Console OS Pro for $20 per year (a major release is planned every year), but Kickstarter backers can get Console OS Pro for life with a $10 early bird pledge, which will then become $25. Beside the Kickstater campaign, you can also find more information about ConsoleOS.com.

I think Canonical had a ‘WINE for Android’, but it got canned 🙁

Console OS is just a copy of Android-x86 according to: https://groups.google.com/forum/m/#!topic/android-x86/qkWG2TwVBqs