Virtual machines are usually run on server or desktop PC to run several operating systems simultaneous. About 2 years ago, I wrote about an embedded hypervisor running Linux and Android on the Pandaboard develompent board, with the goal of separating home and enterprise operating systems in mobile devices so that enterprise data is safe. Since then, virtualization extensions are now part of ARM Cortex A15 / A7, and as well as the new Cortex A53 / A57 ARMv8 64-bit cores, but in my mind at least, those where mostly designed to address the server market. It turns out hypervisors are also useful in the automotive field, where for example, the dashboard and In-vehicle infotainment (IVI) systems runs in two separate virtual machines controlling two different displays from one processor.

Mentor Embedded showcased such automotive system at ARM Techcon 2013, where they showed a Freescale i.MX6 quad core board, which looks like Freescale SABRE Lite development board, running their embedded hypervisor with two virtual machines controlling the two displays (dashboard and IVI), and they showed how they could reboot the virtual machine controlling the IVI system without affecting the dashboard display.

So I had a look into Mentor Embedded hypervisor to find out a few details.
According to Wikipedia, there are two types of hypervisors:

Kernel-based Virtual Machine (KVM) is somewhat between the two types, as it requires an OS (Linux or FreeBSD), but gives direct access to the hardware via kernel modules. 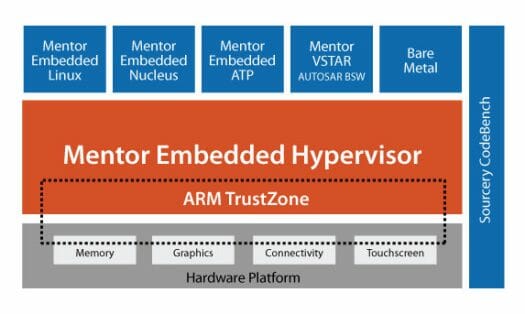 According to the company, the key benefits of their hypervisor for developers are as follows:

I was hoping to get some numbers about data and code footprint, some estimation of the performance hit due the hypervisor, and currently supported ARM platforms, but I could not find any of that. Mentor Embedded hypervisor seems to be mainly focused on automotive applications.

If you want to find out more about applications currently using ARM hypervisors such as servers, automotive applications, and Android, you can check Xen ARM hypervisor page with links to some relevant presentations from Xen Project Developer Summit 2013.