You’ll find the full details for installing Android SDK at http://developer.android.com/sdk/installing.html. The purpose of this blog entry is to summarize what I had to do to install Android development environment (Android 2.3 SDK (Gingerbread)) on Windows XP.

Before installing the Android SDK per se, you’ll need to install some set of tools used by the SDK. Here are the steps to setup your Windows XP computer for Android development:

You need to go to http://www.oracle.com/technetwork/java/javase/downloads/index.html, select your OS (e.g. Linux, Windows, MAC…) and the file you want to download. I selected Java Platform (JDK), then downloaded Java SE Development Kit 6u23. I got the jdk-6u23-windows-i586.exe which I installed in the default directory, i.e. C:\Program Files\Java\jdk1.6.0_23).

Then you’ll need to install Eclipse, and open source IDE.

Several versions are available at http://www.eclipse.org/downloads/, but since Google recommends Eclipse Classic, I just download it (version 3.6.1 – Helios) and got the file eclipse-SDK-3.6.1-win32.zip, which I extracted in C:\ (a directory eclipse will be created).

Now is the time to install the SDK. It will be installed directly, you’ll first need to download the SDK Starter Package, a tools used in install the SDK, The latest version  is available at http://developer.android.com/sdk/index.html. Right now the latest version is revision 8, so I downloaded the installer for Windows XP.  Then run installer_r08-windows.exe to install the starter package. After that start the SDK Manager, click on Available Packages (I selected all) and click on Install Packages. The download will take a while.

The ADT (Android Development Tools) plugin for Eclipse is designed to give you a powerful, integrated environment in which to build Android applications.

First start Eclipse (C:\eclipse\eclipse.exe), then select Help->Install New Software, click Add on the right top corner.  In the Add Repository dialog that appears, enter “ADT Plugin” for the Name and the following URL for the Location: https://dl-ssl.google.com/android/eclipse/ (if case of problems, use http instead of https). Then click OK and Next. You should see the list of available tools: 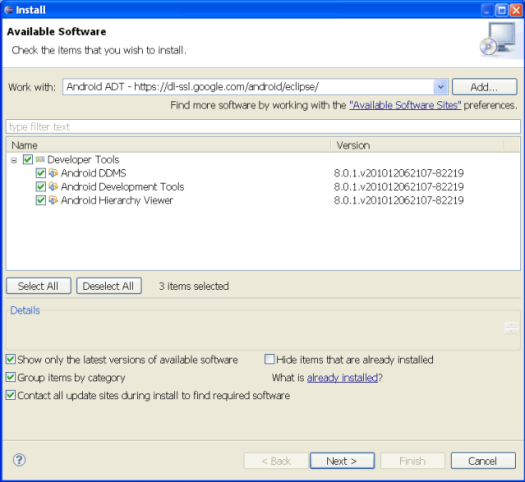 That’s it your system should now be fully configured to develop Android applications.

The first think you’ll have to do is to create an Android Virtual Device (AVD). In Eclipse, go to Window > Android SDK and AVD Manager, select Virtual Devices in the left panel, click New. Type the name of the AVD, for example “my_avd”. Choose a target. The target is the platform (i.e. the version of the Android SDK, such as 2.1) you want to run on the emulator, ignore the other fields for now and click Create AVD.

Fill in the project details with the following values:

Now open HelloAndroid.java, and modify it to display some text (added lines in Green):

Select Run > Run then “Android Application”. Eclipse will create a new run configuration for your project and start the Android Emulator. The latter took a while on my computer (2 to 3 minutes), this is ready when you see the usual Android UI in the emulator. I noticed some errors the first time, I ran the app (disconnected from target),. If this happen, wait the Android to fully boot in the emulator and Run the application again. You should then see your application (on the left) and the emulator controls on the right. 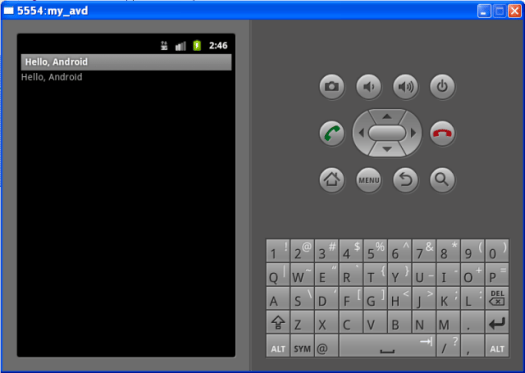 That’s it. To know more about the right method to construct a UI in Android, you may want to carry on with the Hello World Tutorial section “Upgrade the UI to an XML Layout” and play around with the other Android tutorials.

So competent! I want some infos in this posting for my rapport de stage. Can i have your contact please? We need your permission to quote it :D. Anyway, That’s congrats. Continue.

Great tutorial,thanks.I expected emulator to appear but it came up wirelessly on my WM8650 7″.Bonus,Isz (keep up the gr8 wrk)

Also make sure the installation directory of the Android SDK (e.g.installer_r16-windows.exe) does not contain spaces or you may encounter the following error:

emulator-arm.exe has encountered a problem and needs to close. We are sorry for the inconvenience.

while running the emulator.

The default installation path is C:\Program Files\Android\android-sdk-windows, you may want to change it to C:\Android\sdk.

@sandeep
I guess you can use the SDK manager to download the source code. If you can’t find it there, a google search lead me to that site: http://wolfpaulus.com/journal/android-journal/androidsdksource

What nonsense there is no file for Windows XP 32 bits

i want to have that talking cat version 3 through android..

@Amaan
But in January 2011, there was one: http://dl.google.com/android/installer_r08-windows.exe

when i installd android sdk on windows,an error is displyed as “Failed to fetch URL https://dl-ssl.google.com/android/repository/repository.xml, reason: dl-ssl.google.com”..so please clarify why i am getting this error on my pc

@purushotam
It may be a transient error. Can you try again and/or download this file in your web browser?

how i can program my torque tablet .deadbot or bootlop tab how to fix

I can’t find the ADT. I open Eclipse but I think I a newer version because there isn’t anything about (Help-> Install new Software)