QSeven is a new standard (QSeven Specifications 1.20) that provides pinout, electromechanical description and implementation guidelines so that the main boards (with the MPU) be easily exchanged. So that you can a larger board with all connectors and a QSeven boards based on Intel icore, Atom or other processors based on ARM that simply fits into that larger board.

The QSeven concept is defined as follows: 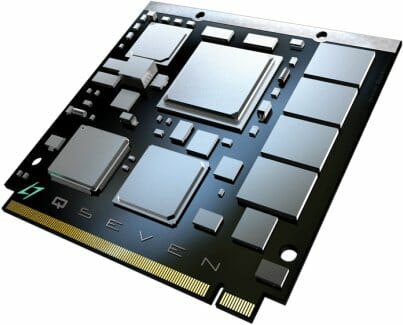 The Qseven concept is an off-the-shelf, multi vendor, Single-Board-Computer that integrates all the core components of a common PC and is mounted onto an application specific carrier board. Qseven modules have a standardized form factor of 70mm x 70mm and have specified pinouts based on the high speed MXM system connector that has a standardized pinout regardless of the vendor. The Qseven module provides the functional requirements for an embedded application. These functions include, but are not limited to, graphics, sound, mass storage, network and multiple USB ports. A single ruggedized MXM connector provides the carrier board interface to carry all the I/O signals to and from the Qseven module. This MXM connector is a well known and proven high speed signal interface connector that is commonly used for high speed PCI Express graphics cards in notebooks.
Carrier board designers can utilize as little or as many of the I/O interfaces as deemed necessary. The carrier board can therefore provide all the interface connectors required to attach the system to the application specific peripherals. This versatility allows the designer to create a dense and optimized package, which results in a more reliable product while simplifying system integration. Most importantly, Qseven applications are scalable, which means once a product has been created there is the ability to diversify the product range through the use of different performance class Qseven modules. Simply unplug one module and replace it with another, no redesign is necessary.
Qseven offers the newest I/O technologies on this minimum size form factor. This includes serial high speed buses such as:

One of the main advantage of such boards is for developers where they can easily exchange platforms thanks to the QSeven connector and MXM connector speeding up the development time and reducing the hardware development costs.  QSeven boards can also be advantageous for future hardware upgrades that will be made easy as you just need to replace the main board.

Seco is one of the founding member of the QSeven specifications and was at Embedded World 2011 to showcase its Intel and ARM QSeven boards.

Seco will also provide the BSP for Windows, Linux and Android for all of those modules.

Hi
I really appreciate if someone can advice me on where i can buy one of theses board quadmo747-x_omap4 please.
tnx

I’m not sure quadmo747-x_omap4 is available right now,. It says available in H2 2011 on their website: http://www.secoqseven.com/en/item/quadmo747-x_omap4/
You can contact SECO at [email protected] for details and ask them how to purchase one board.

There’s also a list of distributors: http://www.secoqseven.com/en/page/sales-channels.html
So alternatively you could contact one of the distributors in your country.