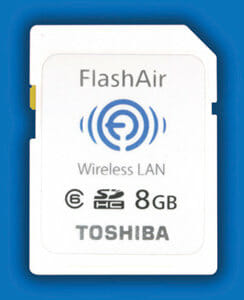 Previously other SD cards such as Eye-Fi allowed Wi-fi connectivity, but the Eye-Fi could only transmit files from a camera directly to another Wifi device, the FlashAir can receive and transfer by using point to point connection and a router is not needed. The FlashAir can be fully configured thanks to a configuration file located in the SD Card, so that you can select the IP of the SD Card, the wifi security settings such as WEP, WPA, WPA2… and more.

The Toshiba FlashAir will be sampled starting November but will not begin sales until February 2012. The price of the card should be between 50 and 60 Euros.

Have a look at the demo and interview recorded by Charbax at IFA 2011.