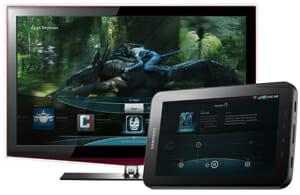 Myriad Group, a company based in  Switzerland,  brings Android (and a Google TV alternative) to non-Android platforms through its Alien Davlik technology, called Myriad Alien Vue.

Alien Vue is a solution that enables TV service providers to add apps to their existing managed service offerings, in order to respond to over-the-top (OTT) content distribution channels from Apple, Google and others. It is compatible with apps developed using HTML5 and most Google TV apps such as YouTube, Netflix and Twitter apps.

Alien Vue allows to leverage existing TV and set-top box equipment and works with mobile phones and tablets to give users control over their TV experience.

Myriad will be showcasing Alien Vue, demonstrating Android apps on TV for the first time at CES 2012 January 10-13.

In the meantime, you can check out the demo below:

Further information may be found on Myriad Alien Dalvik page.

This is pretty sweet, I love all the places Android is going. I have been using a media center TV for a long time now. Due to other needs, I switched to XP a few months ago, as I had to have a stronger powered Windows machine than my current Virtual Machine would allow for, but didn’t want to dual boot and it made a nice compromise. however, it is not really needed anymore, so I will be switching back to Linux when I get time. Being able to netflix on it is a HUGE selling point for me, so… Read more »