Eben of the Raspberry Foundation announced that a developer (Naren) has been working on a port of Android 4.0 for the Raspberry Pi, and the port already appears to be a an advanced stage with hardware-accelerated graphics and video working smoothly. 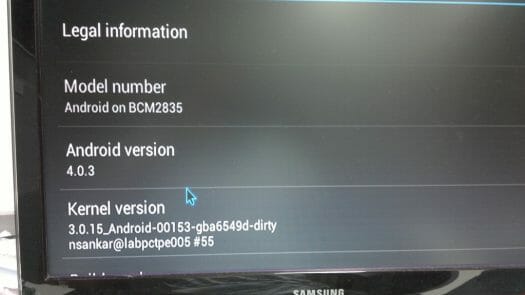 The only major issue is the lack of support for AudioFlinger. The demo below shows Android 4.0 running in the Pi without audio as it’s not implemented yet. The UI is relatively smooth, and video playback and YouTube video streaming work pretty well. This is quite impressive considering the Raspberry Pi has less than 256 MB of memory available to the system, and I suppose they must have made some compromises to make this work. Moreover, I would expect that many applications won’t run properly due to the ARMv6 processor and low system memory.

The source code and binary release are not available yet, as this port uses a different kernel and VideoCore binary image from the one available on GitHub. But the goal is to eventually merge those changes with the code in Github, and a binary release download is said to be expected in about a month.

If you are interested in Android for Raspberry Pi (Let’s call it PiDroid), you can also check out the initial Raspberry Pi CyanogenMod ports. However, those does not appear as advanced as this port, as CM9 and CM7.2 are said to be unusable and barely unusable respectively.