While doing a Google search to locate the open Linux page of AMLogic, I noticed another link reading “Amlogic AML8726-MX Linux kernel code released“. Interesting. So AMLogic appears to have released the kernel source code for their latest dual core Cortex A9 processor at the beginning of August and the tarball is available from their open source site:  kernel-common-2012-08-03-git-a63244fb9c.tar.gz.

A github user (fards) also imported the code to github, but he’s not affiliated with AMLogic, so don’t expect commits from AMLogic there. Let’s retrieve it:

AML8726-MX is codenamed MESON6 in the source code, and the code is in arch/arm/mach-meson6/, but let’s see if we can find a config file in arch/arm/configs. Yes! There are 4:

The descriptions are my guesses based on the file names and a quick look and the configs.

Since ARM8726-MX is a dual core processor, and it’s no fun using the single core version, let’s try  meson6smp_defconfig:

The warnings mean we won’t have access to some board config and drivers specific to AMLogic’s customer board, but we should still be able to build the kernel with one of AMLogic reference platforms. 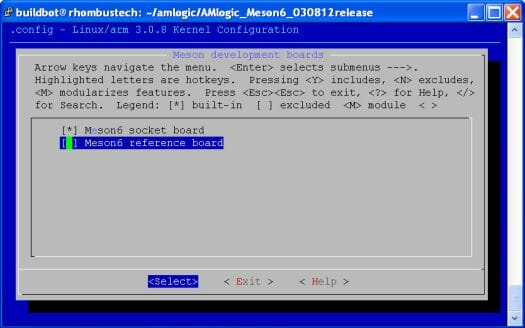 There are 2 Meson6 boards available in menuconfig:

I have no idea what those are, so let’s carry on with the default setting (Meson6 socket board).

I first tried to build with Linaro toolchain, but this failed with :

which appears to be a bug in gcc-4.7. So I’ve used the toolchain provided on openlinux.amlogic.com (Code Sourcery G++) instead:

Great, the kernel builds fine. Let’s complete this by building and installing the modules:

Those last steps will build the Mali drivers (ump.ko and mali.ko), and “install” all modules in build_modules directory.

For AMLogic AM8726-MX set-top boxes such as Geniatech ATV1200 (See video), this code might be enough, but fads mentioned in a comment that lcd/ips code is missing and it might be more difficult to use this code on tablets such as Ainol Novo 7 Aurora II. He also started a developers thread in slatedroid.com, join the discussion if you are a developer interested in this project.

so that means soon or later we can expect a Linux distro for ainol elf2 which is a DualCore Amlogic8726-MX tablet saw somewhere selling at $99.
LCD issue means display will work without touch or it wont show anything? I mean if display doesn’t give touch response, it’ll still remain usable with keyboard mouse.

@max
That means blank screen, but it should be possible to copy the binary LCD modules from your tablet.
I’m also not sure the the touch support is there for your device. There are no touch modules, but touch screen support is enabled inside the kernel. If you really want to know you can follow the slatedroid link above.

oky, Also an entirely different tangent but still somewhat relevant.
Technically which SOC based tablet should give you a better performance especially for ‘web browsing and for longer battery life’.

Where are the AML8726-MX based boxes? I want one for XBMC

@LuckyKnight They are starting to appear on the Chinese OEM sites, but it’s better to wait for Pivos to release such a box for a number of reasons 1) Your supporting Pivos and XBMC team by buying their box. 2) Pivos will be building a linux/XBMC firmware for the box like they do for their 8726-M1 box. 3) Actual technical support. 4) You know what you will be getting, buying a box right now from the OEM’s may be a risk even if it has the same chipset unforeseen issues may pop up and you could get a bum deal… Read more »

hi
What do you think is the best box now to play with xbmc?

the odroid-x or a amlogic board?

@io
Sorry, I don’t have time right now. You could try it yourself

@I-Kev
amlogic. Other processor have support via external players (e.g. diceplayer), so the videos aren’t played within XBMC interface

as noted the source that amlogic released is missing configs and drivers.
its also designed to be built with a very old q2010 toolchain.

its actually fairly close to the code for the ainol fire, there’s quite a lot of changes to the ainol elf-ii code.

I was busy messing with the elf-ii code (it runs on gcc4.6 at least now and some of the earlier linaro 4.7 toolchains)

should also point out that the elf-ii code ootb uses an older Mali code sdk 10? the fire and main amlogic code uses sdk14, so I patched that one in to the elf.

I’m keen on getting the arm r3po/r3p1 mali code working.

my gits are messy, as I use them as a transfer for experiments between different build machines btw.. you have been warned 😀

@fards
do you have access to mali source codes?
can you build old 2.6 kernel + mali drivers with hardfp plz 🙂

for those who want to contribute developping on the 3.0.x kernels for amlogic m6

I have tried to compile the module joydev to have joystick support in my geniatech atv1200. I followed the instructions in the article, and I have generated the compiled module: joydev.ko. But when I’ve put in the geniatech atv1200, to execute the instruction to load the module (as root): insmod/system/lib/modules/joydev.ko I always get the same error: exec format error well, I check with the modinfo command the module has the same version of the kernel that my atv1200, but still fails also. any suggestions? or maybe just the device does not support this module? Besides, I run the command dmesg,… Read more »

Thanks for responding so quickly.
I had seen that article too.
I’ll check back and try again, because I was using a different compiler.

after all the tests, I have not been able to create a module that is loaded correctly in the Mygica / Geniatech atv1200. this is what I did: kernel source code from http://www.cnx-software.com/2012/08/18/amlogic-releases-aml8726-mx-linux-3-0-8-source-code/ : git clone git://github.com/fards/AMlogic_Meson6_030812release.git possible configurations for atv1200 (I’ve tested with the latest): meson6_android_defconfig – Android config file (Single core) meson6_defconfig – Linux config file (Single core) Android all config disabled. meson6smp_android_defconfig – Android config File with smp (symmetric multiprocessing) support meson6smp_defconfig – Config File with smp (symmetric multiprocessing) support, enabled Android stuffs, but no touchscreen support … To create the module I am following this tutorial:… Read more »

@rafa
Do you still have the same error?

When I run the modinfo instruction only see this small difference:

It seems you just have to disable modversions for your kernel and it should work. There shouldn’t be any difference at all between the 2.

@rafa
Ideally you should try to build the kernel with the same version and kernel config as in the firmware in your device, and build the module against that.

If it’s not possible, maybe the hack on stackoverflow may work.

Hello, I am able to build a zImage but i can’t work out how to compile that to a boot.img for flashing via CWM can you please help me. I tried unmkbootimg and splitboot neither will extract existing boot.img so im not sure what to do now.

Here is my module.

Why no edit button? Also uh i know im decompiling it correctly as i can decompile my xperia play kernel i just can’t decompile the boot.img for my crossflashed sumvision cyclone x2 to geniatech atv1200

@Fma965
I’m not sure how to do that. I have not played a lot with AMLogic. XBMC (Android) developers’ community should be able to help since they’ve spent a lot of time and efforts on the platform.

Hopefully you guys can help me out, I’ve been trying for a few days to compile my own module for Geniatech ATV120 (same kernel as ATV1200), and its driving me CRAZY! I’ve gotten as far as compile the modules and first I got Exec Error, but after making the changes to get the exact kernel version I now get “disagrees about version of symbol module_layout” so I wanted to know how the hid-sony.ko made by fma965 since it works perfectly on my atv120, but fma965 has replied that he forgot how he did it and lost all files related to… Read more »