About 2 months ago, I received a 7″ capacitive tablet powered by WonderMedia WM8850 Cortex A9 processor and running Android 4.0. The WM8850-MID tablet cost me $76 at the time, and was available for as low as $72, which I found extremely cheap for a tablet with those specs. Since then AllWinner A13 processors have started to be used in tablets with similar specs – but without HDMI output – that sell for as low as $55. At the Hong Kong electronics Fair in April 2012, Rockchip announced several processors including the RK2906, which I was led to believe would be a cut-down version of ARM Cortex A8 RK2918 without HDMI, but it appears not to be the case. And today, I received a “Deal Alert” for an RK2906 Android 4.0 tablet that sells for $59.99 including shipping

on Focalprice and could be an alternative to A13 tablets, especially if HDMI is important to you. 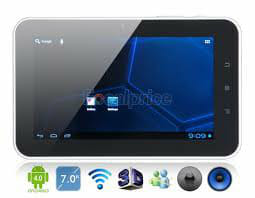 Here are the specs for this tablet posted on focalprice:

The memory (512 MB), screen resolution (800×480) and battery capacity (2000 mAh) are on the low side, I’ve found the first two not to really be issues (for my use), but with a 2000 mAh battery you may end up having to recharge your tablet once or twice a day. The only advantage is that it limits the time you waste playing games on your tablet…

Focalprice is not the only one to sell RK2906 tablets in this price range, as I’ve found one on Aliexpress that sells for $64.80 with a 3000 mAh battery.

RK2906 processor is very new, so there is no community around it for now, and Rockchip does not release the GPL source code easily, so it may take a while before the device is hacked to run Cyanogenmod and/or some Linux OS.

For pasts few months I am looking for 8 Inch cheap chinese tablet for my car integration, but it seems that 8 inchers ar much more expesive. You can find deals like thos one for 7 inchers, but cheapest 8 incher i found is 99usd. Maybe you have some ideas where i could look for cheaper prices? I need it to be capacitive screen and android 4 too. Thanks

I don’t know why these Chinese guys are partial with VIA chipset when it comes to battery:) , WM8850 cortex A9 all models most of them came with a 3000mAh at the time when all other Allwinner A10 and Amlogic-M3L were coming with a 3700mAh batteries.

And now this with 2000mAh when similarly priced A13 are coming with atleast 3000mAh batteries. Someone needs to tell them that even mobile phone got 3000mAh batteries these days.
Example $56 A13 with 3200mAh http://www.aliexpress.com/product-fm/580474831-Allwinner-A13-Q88-tablet-pc-7-capacitive-Screen-android-4-0-webcam-six-colors-black-white-wholesalers.html

@Jean-Luc Aufranc (CNXSoft)
Thanks, but aliexpres does not work for me as shipping is expencive and they use companies like dhl that charge custom charges that are 80usd in my country alone.

aagghh! again fix the link pls. need edit button. *noticed brad is using “WPtouch Pro 2.2.4 By BraveNewCode” themes for his blogs and I have tested netbooknews dot com and liliputing dot com for DISQUS. On slow connection, slow device (android 2.2/512mb ram / 1ghz proc.) with opera mobile browser (tablet mode) DISQUS loads properly in desktop mode of site as well as on mobile mode of website, surprisingly I’ve seen DISQUS even showning “thumbs up /down ” on comments, not seen this DISQUS behavior on most of the websites for the reasons not known to me. On fast device… Read more »

@Devlon Macormister
The seller for $80 sends with China Post, but Hong Kong Post is also available. Chinese sellers are often flexible concerning what they write on the package…

@Jean-Luc Aufranc (CNXSoft) I have a Sanei N83, which is very similar to the one you just – Ampe & Sanei seem to be the same company – apart from 1GB ram, 1024×768 screen, Bluetooth & a metal back panel. It’s pretty good – and I paid $130 quite recently, inc shipping and quite a nice case – light, nice sized screen for reading, handles video very well. Except wifi reception seems weak. This seems to make the browser hang. (But it’s my first tablet with wifi; maybe that’s typical?) If I could get Bluetooth (or Samba, or *some* convenient… Read more »

@Onebir
Which browser are you using? I found the stock browser to be quite slow, and the best is Opera Mini.
You can use ES File Explorer to exchange files between your tablet and your Ubuntu Desktop via SAMBA.

Since RK2906 has HDMI, it could be probably be integrated in mini PCs that cost around $40.

@max
I tried disqus some months ago, but it completely messed up with my blog layout to the point it was impossible to comment… I think it’s related to the caching system I use, and must be fixable. It’s not a convenient time to try something new on my blog now, but I’ll probably enabled disqus in a few months.

I had tested a lot of blogs for loading speed / platform compatibility / element loading etc. when I was thinking of writing a blog on thing’s I pick from here and there, and was thinking of asking you some suggestion on the right / cheap platform etc. Also wanted to know few things on how to squeeze few dollar from a blog etc.

But then I got lazy and left the research in middle of it. 🙂

oky, also point to be noted that from only last month or so DISQUS performance has improved drastically. I’m saying this as i was researching for a better comment platform for my blog and was frustrated to find that how badly DISQUS behaves.

But now things look very improvised for some reasons not known to me.

Here is kind of review. In russian.