Going beyond panoramic photo shots, photo sphere allows you to generate a 360 degrees panorama by taking pictures in all direction, up, down, right and left.

Head over Google maps to see a few examples.

You can now just glides over the letters you want to type, and the new improved keyboard will find the word you want to type. The keyboard is also said to be able to anticipate the next word allowing to type a full sentence by just selecting suggested words.  Google also claims text-to-speech capabilities and voice typing have been improved, and you don’t need an internet connection to type with your voice anymore. 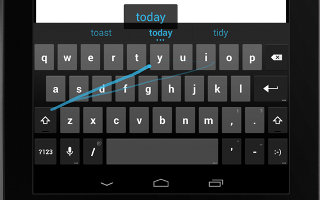 This is the most important new feature to me, as when you let others (e.g. kids) use your tablet, you don’t have to expose your Facebook, Twitter, emails and other personal data to others. Multiple users support will let users have their own homescreen, background, widgets, apps and games. If a game is installed on a tablet, and used by several people, each will have their own scores.  You can switch between users easily without log in and out. This feature is only available only on tablets.

Miracast is a new standard that allows Wi-Fi video streaming and/or mirroring of your device on a TV, and this is now enabled in Android 4.2. The TV also needs to be Miracast compliant. I doubt there are many (any?) HDTV that supports miracast at the moment, but this will come and existing TV will certainly support the feature via some low cost HDMI Dongles.

Daydream appears to be some kind of screensavers that will run when you device is docked or idle, and show off your photo albums, get the latest news and more.

You can swipe down to see all your notifications on the screen, and tap the notification window directly to take action such as calling after a missed call or send an email after a notification has been received.

I’ve also check Google Developer site to see if there were changes for developers or a new SDK was available, but the site still shows Android 4.1 information. This will certainly be updated once devices become available on Nov 13, 2012.