Mozilla Releases Firefox for Android 14.0 with Improved UI and Performance
Skip to content

Mozilla announced Firefox for Android 14.0 on their blog yesterday.

Sunspider benchmark results are said to shows that Firefox for Android is much faster than the stock browser, but they did not provide numbers or comparison with other browsers. Instead, they developed Eideticker, a new benchmark, measuring Web experience, and they optimized Firefox for Android to it. And “Oh Surprise!”, they beat all other major Android browsers (Chrome, Opera and Dolphin) in their own benchmark. This benchmark shows that Firefox is over three times as fast as the stock browser, and nearly twice as fast as Chrome for Android on a Galaxy Nexus phone running Android 4.0.4. 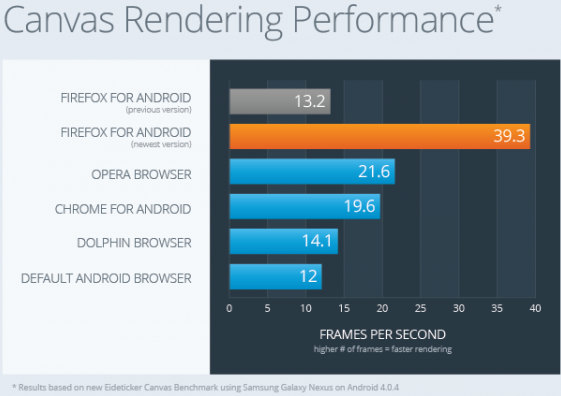 Firefox for Android supports Flash, and you can watch (Youtube) videos within the browser, play games and more with your Android device.

Mozilla implemented privacy and security features such as Do Not Track, Master Password, HTTP Strict Transport Security, etc… in their latest mobile browser.

Mozilla recommends user to try out BrowserQuest an HTML5 multi-player role playing game to experience the power of the new Firefox for Android.

I’ve decided to install Firefox for Android in my tablet because of the benchmark claims, and more importantly because of Firefox Sync. My main desktop browser is Firefox, and it’s really convenient to be able to share password and history on two different devices, especially since typing emails and password in Android is really a pain.

My first impression is that I’m really happy with the performance which appears similar to Opera Mini, my current Android browser, and I just love Firefox Sync.

I’ll keep using it, and baring unexpected major flaws, I expect it to become my main Android browser because for the Sync feature.