ARM Techcon 2012 started yesterday with a major announcement, as ARM unveiled the ARM Cortex A50 series, the first 64-bit ARM Core based on ARMv8 architecture. The company announced 2 cores that can be used independently or in combination to take advantage of big.LITTLE processing:

Those cores manufactured using 28nm, 20nm and eventually 14nm process technology will be used in smartphones, tablets. mobile computers and servers (See AMD/ARM announcement). They’ll be software compatible with ARMv7-A processors (Aarch32) which should greatly facilitate the transition and support both 64-bit and 32-bit OS and applications, although obviously 64-bit apps won’t run on 32-bit OS.

Engadget uploaded 18 slides of the presentation, but there seems to be more. I found the following slide to be particularly interesting as it shows how Cortex A50 cores compare to today’s Cortex A9 and Cortex A15 cores, and what kind of performance and battery life improvement we may expect. 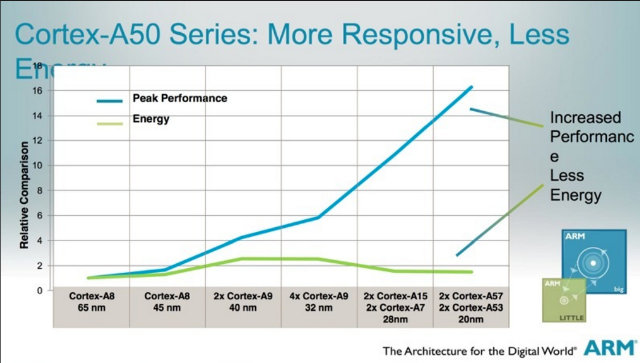 The chart above compares the performance of quad-core cortex A9 processor vs quad-core Cortex A15/A7 and Cortex A57/A53 processor, and shows that quad core big.LITTLE A57/A53 processors should provide 2.5x performance improvement and half the power consumption compared to today’s quad-core Cortex A9 processors. Of course, that does not mean that battery life will suddenly double, because this only takes into account the processor power consumption and more advanced applications will eventually be used in more powerful device, but this is clearly a massive improvement. Compared to A15/A7 however, the power consumption appears to be similar, although there’s a clear increase in performance.

The Cortex A50 cores will be coupled with Mali T67X or T62X GPUs and CCI-400 cache coherent interconnect (For consumer devices) or CCN-504 Cache coherent network (for server chips).

Processors based on Cortex A50 series should be available in 2014, and products in 2015. You can find further details on Cortex A53 and Cortex A57 pages on ARM website.

Update: You can watch ARM keynote at ARM Techcon including Cortex A53/A57 announcement (Around 22:00) in the video uploaded by Charbax embedded below.