Do you remember Rhombus Tech AllWinner A10 EOMA-PCMCIA CPU card , that was announced at the end of last year? Well, after much wait, the first prototype is now available. 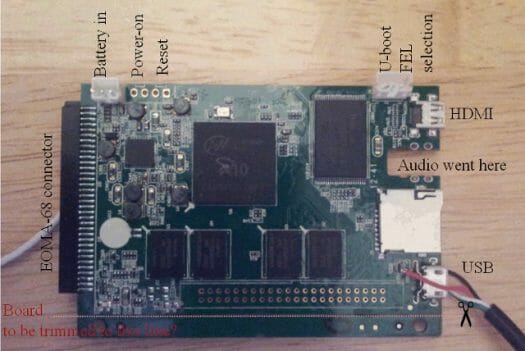 This CPU module is based on AllWinner A10 Cortex A8 processor, with 1GB RAM, a NAND Flash, one USB OTG port, microSD slot, HDMI, PMIC, an Ethernet PHY (at the back), an expansion header, and the EOMA-68 connector giving access to peripherals signals (SATA, Ethernet, RGB/TTL, I2C etc…). It can act as a Linux/Android stand-alone computer or be connected to a baseboard. One of the first project will be a laptop for the Chinese market.

AllWinner A10 SoC may be a little underpowered to be used in laptop compared to the latest ARM processors, but since EOMA-PCMCIA is a standard, pin-to-pin compatible modules will eventually be designed and manufactured with different/faster (ARM) processors. New modules are expected to be designed much faster than the first one which took over one year.

PCMCIA only has 68 pins, and as Barry Kauler explains, many signals from the processor won’t go through this connector, which could explain the expansion header at the bottom of the board. Other system-on-modules are usually design with standard connectors with much more pins: SO-DIMM has 200 pins, and EDM & ULP-COM standards provide MXM 3.0 connectors with 314 pins. The lack of signals carried through the 68-pin connector will most probably affect the number of supported features and/or upgradability of those EOMA CPU cards. There are, however, pros and cons for all SoM form factors, you can read more on elinux.org.

Maybe they will also release an Allwinner A20 based version?

Also I think an A20 or A31 cubieboard is likely.

@Harley
Since A20 is pin-to-pin compatible with A10, this should be no problem, at least in theory.

@onebir
I haven’t followed that much, but if they do, it will be an Android board only (no linux), at least at the beginning.

That aim for a BOM of $15 is a bit misleading. That is not their aim: http://www.rhombus-tech.net/faq/#index4h2
I think a BOM of $15 is not even possible without Mass Volume (millions of units?) and even then, a BOM price doesn’t say too much about the actual product price 🙂

@Pieter
Actually, it’s not misleading at all. The announced target (at the time) was to get enough orders (100k+) to try to get the BoM cost down to $15, and they did not provide retail target in 2011. They’ve changed the page since then. But since I don’t want to get people into trouble (See arm-netbook mailing list post), I’ve crossed out the $15 target in the post above.