CES 2013 has finally started, and Nvidia has had a pretty amazing keynote with some PC gaming announcements such as “GeForce Experience” which is a piece a software that can configure your games settings automatically based on your PC hardware (e.g. processor and GPU), and 3 cloud and mobile devices announcements: 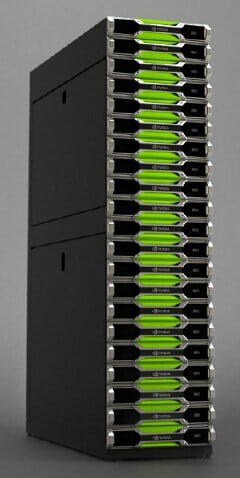 NVIDIA GRID Cloud Gaming Platform is comprised of 20 GRID server per rack with a total of 240 Nvidia GPU capable of 200 TFLOPS or the equivalent of 700 Xbox 360. Nvidia GRID render 3D graphics in the cloud in order to allow virtually any device (e.g. smart TVs, PCs, tablets and smartphones) to play PC quality games on their devices. So one day, you may be able to play high-end games such as Battle Field 3 on your Raspberry Pi.

According to the press release, the NVIDIA GRID Platform delivers three key attributes:

During the keynote, they demoed “Trine” on a LG TV where the GRID client had been ported, and the game rendered in the GRID platform.

After several leaks (1, 2), Nvidia Tegra 4 processor specifications (4x Cortex A15, 72 GPU, 4G LTE modem) are not really news, and Nvidia CEO did not spent much times on technical details, and focused on demo showing why more processing power is needed in mobile devices.

More processing power will allow much better computational photography. The second demo is about HDR. I’m not very knowledgeable, and that’s an euphemism, when it comes to photography, and today I’ve learned about HDR (high dynamic range), a technique that takes 2 shots (low exposure/high exposure) and combines those to have optimal background and foreground in your picture. This can improve greatly pictures if background and foreground luminosity are much different, as shown in the picture below, where the final picture on the right is the combination the first 2 pictures.

HDR is already used in the latest phones such as iPhone 5, but the whole process takes about 2 seconds because a lot of the work is handled by the CPU, and this will work fine with static scene, but not so much with moving objects.

Nvidia has a computational photography engine that makes use of the GPU and other components of Tegra 4 SoC to bring this time to 0.2s per frame, even allowing HDR movies. The diagram below shows roughly the data flow, and components involved. 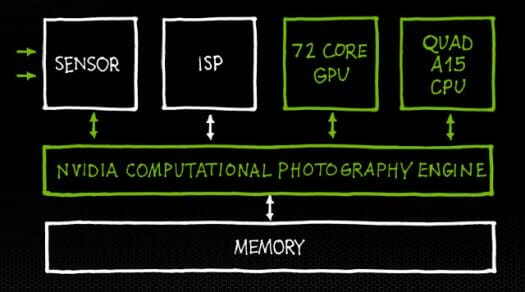 They demo photography and real-time HDR at the keynote, the latter is not possible on current devices. Existing Android applications will be able to take advantage of HDR technology without modifications, as this is done by the SoC.

Eventually all that processing power will allow features made possible thanks to faster computational photography such as HDR panorama, strobe motion, 3D reconstruction and object tracking, and our powerful camera phones may even possibly surpass capabilities of DSLR cameras in the future.

They concluded Tegra 4 part with a demo of Dead Trigger 2, and a short introduction of Icera i500 soft modem used in Tegra 4 to provide 3G/4G(LTE) connectivity. This SDR modem is 40% smaller than conventional LTE modem. 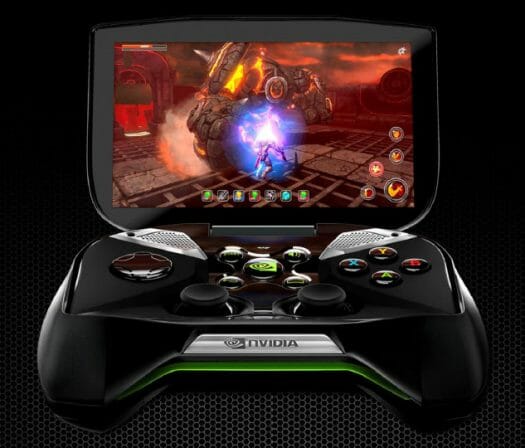 Watch the short video below to see a 3D view of the Nvidia console.

The device can be used as a standalone game console or as a controller if you connect it to your TV via HDMI. Several demos were shown:

He played some tablet games (sorry can’t remember) both directly on the device, connected to the TV, and showcased multiplayer mode with 2 Project SHIELD consoles.

But the most impressive part was when they played PC video games on the TV using the SHIELD. The demo did not go very smoothly, but they were soon able to play high-end games such as Assassin Creed III and NFS most wanted on their 4K LG television. You “just” need a PC with a GeForce GTX 650 GPU or higher connected to your LAN, which will render the game, and stream it to project SHIELD via Wi-Fi or Ethernet, and display it with HDMI on the TV. The demo was done via Ethernet since Wi-Fi is usually slow a conferences, so he must have simply connected a microUSB to Ethernet adapter for the demo.

I’ve watched the keynote (nearly 2 hours), and found it pretty informative and entertaining, so if you have time to spare, you can also watch it below.

I think you can play cloud game on you raspberry pi now
http://en.wikipedia.org/wiki/Cloud_gaming#Solution_providers
OnLive or Gaikai use nvidia technology
And at least OnLive have public android client
I don’t know about current status of android on raspberry pi but I don’t see any problem
As cloud gaming is all about streaming video to client (raspberry pi)
and it is working fine on raspberry
http://www.raspberrypi.org/archives/1700

“and our powerful camera phones may even possibly surpassing capabilities of DSLR cameras in the future.”

The software on mobile phones can already do that – but the physics says “no”.

Lenses aren’t big enough to get enough photons, sensors too small, too much noise, etc.

Still, these things work just as well in cameras so it should improve those too.

Now, if only android supported opencl instead of their renderscript junk, it might be possible to get to all that processing capability …

@notzed
I saw libs and .h files on Freescale android