Wemo Wi-Fi-based home automation solution was announced at CES 2012 last year, and included products such as a control switch and a motion control switch, that can detect your presence and only turn on/off the lights or other electrical equipment when needed. At the time however, the only supported platform was iOS. At CES 2013, Belkin has announced a new product with the WeMo Light Switch, an Wi-Fi connected light switch to remotely control wired household lighting from anywhere, and support for Android. 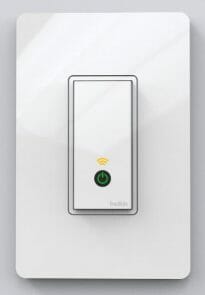 The WeMo Light Switch can replace an existing light switch and connects into your home’s existing electrical wiring. Once in place, you can turn a full bank of lights on and off from anywhere, put them on a schedule, or use other WeMo or online triggers to control them through a smartphone or tablet. The WeMo Light Switch is controlled via the same WeMo app as the WeMo Switch and Motion.

In February, Belkin will launch an open Beta test for users of the Samsung Galaxy SIII and other leading devices, and the official launch should occur in Q2/Q3 2013.

I hope it gets opened up. Would like to see my XBMC remote on tablet being able to control such switches.