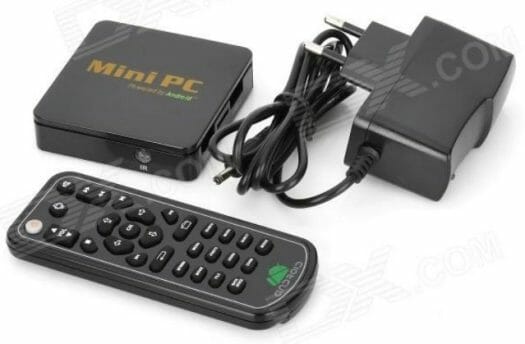 The only differences I could spot based on Dealextreme specifications (BIG FAT WARNING) are that HD18M is said to feature HDMI 1.4, instead of HDMI 1.3 used in A11, as well as built-in Wi-Fi, but HD18M has only 2 USB host ports vs 3 USB ports in Mygica A11.

This Android 4.0 media player ships with an IR remote control, a 100~220V power supply, and a user’s manual in English and Chinese. This type of box is mainly interesting to potentially run XBMC natively in Linux [Update: There’s now a (preliminary?) XBMC Linux ROM for the Mygica A11] or with proper XBMC UI integration in Android (i.e. not via external player), since you’ll soon (February) be able to get a Rockchip RK3066 set-top box for the same price.

One of the picture on DX.com shows the MAC address “c4:4e:ac:xx:xx:xx” on the device, and a MAC address lookup shows Shenzhen Shiningworth Tech owns this address range. The company sells what appears to be the same box, but called “U2M”, on Alibaba for $46 to $48 per unit for 100 pieces orders.

Nice find, I will have a look.

BTW: The linux XBMC build released for the A11, is basically the GBox build with the install check removed. When I am back from my trip I will include the A11 into the build system

@Gabe
Thanks I did not know that one.

Hello, i tried to change the Uboot settings of this device to boot from sdcard. I found the TX and RX pins. In uboot I wanted to set the uboot parameters as described on openlinux.amlogic.com: http://openlinux.amlogic.com/wiki/index.php/Arm/Android/Running_Android_from_an_SD_Card First I couldn’t save the settings and I had to unlock the nand flash: nand write_protect off Then It worked, it found the uImage on the mmc, but then it couldn’t load the kernel on 82000000 Is this because the uImage is to big? I know the 82000000 is the part where it writes the kernel to in memory. But I don’t find a… Read more »