If you can’t wait until 2014 to get the MeCam, Seeedstudio has something for you: The Crazyflie Nano Quadcopter, which looks similar to the MeCam, but does not feature a camera, its control board is powered by STM32F103CB MCU @ 72 MHz with 128kb flash and 20kb RAM (so, no it won’t run Linux), and at $173 the price is significantly higher. 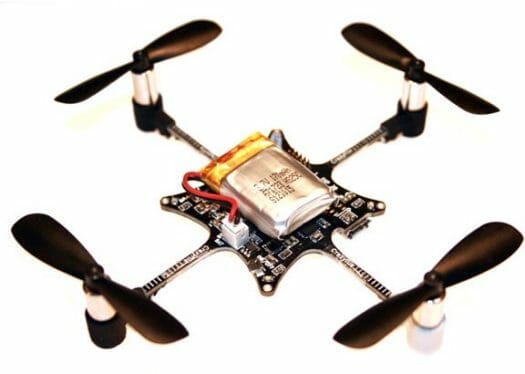 The Crazyflie is sold as a kit with a Crazyflie control board, a Crazyradio, one Antenna 2 DBi, 4 motor mounts, 5  Coreless DC motors, 4 CW propellers, 4 CCW propellers, and a LiPo battery. You’ll need a tweezer, a soldering iron, and some hot glues to assemble this together.

Once this is all assembled, you’ll need a standard micro-USB cable for charging, a PS3 compatible joystick to control it via a Windows or Linux PC which is used to control, log, and/or upgrade the Crazyflie.

This devkit is fully open source, and you can now download documentation and development tools, and (presumably) before it ships, you will be able to download the schematics, gerber files, and firmware source code on Crazyflie wiki.

The short promo video below is pretty interesting. It first shows some of the abilities of the kit (e.g. stability, even in windy conditions, programmability, etc..), and then hacking possibilities: keychain camera, inductive charging, training wheels (to safely hit the walls), flying LED light, etc…

SeeedStudio takes pre-order for the Crazyflie until the 18th of February, and will ship the kits on the 25th of April.

And this $173 pricing for less features shows that $50 for the MeCam is just unrealistic marketing babble.

(just try to think about individual components pricing, sum it up and then consider someone wants to make some profit with it as this is not like the rasberry pi charity 😉 )

Didn’t buy these as I felt it was a total waste of time. Or maybe because I am not really into open-source quadcopters and was just getting started in this flying thing.