Lernstift UG, a German startup, is working on a digital pen, called Lernstift as well, that can help children learning how to write by vibrating in case of errors. The Lernstift can be used in 2 modes:

Since it features a ballpoint, it can be used as a real pen, you know to write on paper…, but you can also write in the air, so I suppose they’ll also make a version without ballpoint, so that kids can enjoy one of their favorite pastimes: writing on the walls!

The pen features a CPU module (2) that’s used to handle handwriting recognition, gather data from the motion (1) and pressure (3) sensors, and manage the Wi-Fi module (4). A battery, a power switch, and a pen refill complete Lernstift design. The pressure sensor won’t be included in the first model, but will be added in version 2 in order to let children know if they press too hard. The Wi-Fi module will allow transferring data, so that the thing you write can be shown on your PC, or smartphone. The company explains you could write SMS with this pen instead of using T9 input method, or using small touchscreen keys.

According to the picture below found in Lernstift website, the CPU module used in the pen could be IGEPv3 COM module based either on Texas Instruments DM3730 or OMAP3530, or the Gumstix Overo module also based on TI OMAP3. [Update: It’s not using of those two platforms, see comment below] 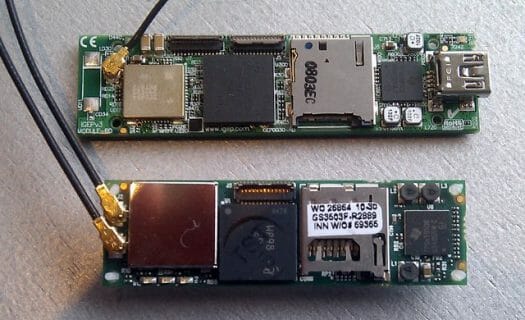 FYI, they seem to have taken this picture from a forum post on robosavvy. In any case, the company claims to use an “Open Linux platform” which costs between 50 and 80 Euros.

For those of you who understand German, the company has uploaded a short video talking about and showing the device (but no demo). In one of their comment, they mention they’ll do an English version of the video soon.

The first version will be available in Summer 2013, and the second version with the pressure sensor should be available in 2014. If you are interested you can register your interest on their “pre-order” page. They did not provide the price of the pen yet. You may find more information on Lernstift.com.

Hello,
good research. We take the picture as you found. We have to provide soon an own pic.
No, we dont use the overo. Its just to hide the real used component for patenting reasons…
Think within 3 monts we can publish all details.
Thank you,
Falk