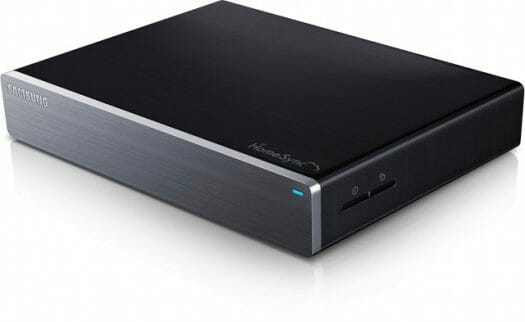 Samsung explains HomeSync can be your own Home Cloud storage thanks to the 1TB hard drive, and supports 8 separate (encrypted) accounts which should be enough to cover most families, and allows each user to upload and download content from multiple devices, and share with other family members.

Since HomeSync is not based on Google TV, you’ll get access to the full Play Store and use (most of) the apps you can already use  on your smartphone and tablet. An Android app will also be provided to let you control Samsung media player wirelessly with an Android smartphone either emulating a touchpad, or mirroring the display (Miracast).

Engadget is at MWC 2013 and had the chance to try out the device, mainly with the Android remote app.

Samsung did not disclose any pricing information, but we already know HomeSync will be available from April 2013, first in the US, and then internationally.

What I like to see is some one setting up a mk802 or any low cost mini pc along a with 1 tb hdd and making it work like a cloud drive 😉 . Lets say no to this high cost (Damn sure about that) home and build one ourself. hmm my sadly my mk802 is already dead 🙁

MK 802 sadly doesn’t have sata interface 🙁 (like all other chineese ARM boards) Because of that you can’t do real htpc with it. I tried dlna server on MK802 and stream videos to pc (vlc) and it worls perfectly in oposite direction where MK was dlna player it also works great!

I’m crosing fingers for Olimex so they will build board with sata interface.

@rohith there’s nothing “to see” or to wait for “someone setting this up”, just get one and install OwnCloud on it.