The mbed community has had a pretty busy week, with first the announcement that mbed SDK would become open source, the release of mbed 2.0, and finally support for the low cost Freescale Freedom board FRDM-KL25Z

The mbed Software Development Kit (SDK), a C/C++ MCU software platform, has always been free (as in free beer) for both commercial and noncommercial use, and the large community around mbed has written tons of code for ARM microcontrollers. But now that the SDK has now a stable API, and the developers achieved transparent portability for code based on the SDK across multiple controllers and multiple toolchains, they decided to release the SDK source under an Apache 2.0 license. Although sharing modifications is encouraged, this license allows users to keep the changes closed if they wish to do so.

mbed developers explain that the 3 most important aspect of the source code release are as follows:

Visit mbed SDK to learn more about the SDK, its API, supported toolchains and targets, and/or get the code directly on github.

The mbed platform, developed by ARM, partners such as NXP and Freescale, and the mbed developer community, has reached milestone 2.0 with the following highlights:

mbed has uploaded a new video giving an overview of mbed. It’s probably only interesting if you’ve never used mbed before.

To get started easily you’ll need one of the mbed NXP (or now Freescale) prototyping boards, and read the instructions on Explore mbed page.

mbed on Freescale Freedom Board (aka FRDM-KL25Z Board) 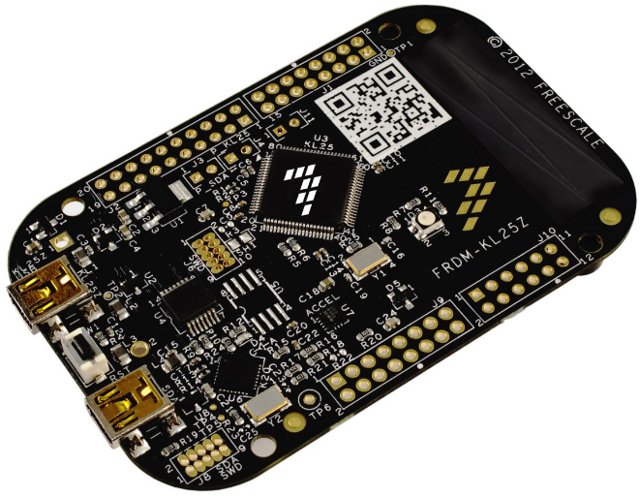 The Freedom board comes with the following features:

At $12.95 it’s much cheaper than NXP LPC Cortex M0 mbed boards that start at $49, but it’s must probably not as well supported by the community just yet.

If you already own a Freedom board, you can get started immediately by following the instructions on mbed.org.