Rockchip RK3066 based mini PCs are clearly the most popular in the market, and after the discovery of one AllWinner A20 HDMI dongle, and one AllWinner A31 mini PC earlier this week, it’s time for the first mini PC based on Rockchip R3188 quad core Cortex A9 processor called CloudnetGo CR9. 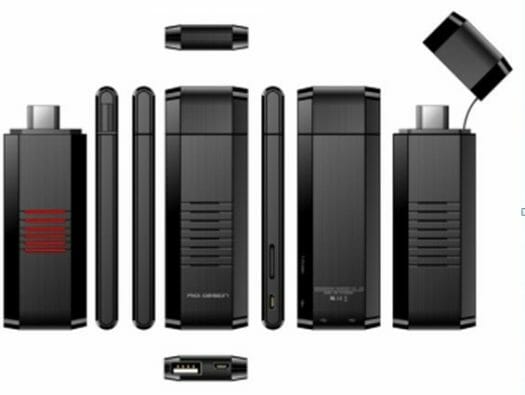 This Android 4.1 device will be sold with an HDMI cable, a USB power cable, a user manual, and an optional power adapter.  This would be the most powerful mini PC to date, although you may not notice that much of performance improvement compared to the dual core version, unless you run multiple demanding tasks in Android. There’s no information about availability, nor pricing at the moment. There’s a page about CR9 in the manufacturer website (in Chinese), but it just seems to promote how “RK3188 is so much better than A31”.

Once GPL source code for one of RK3188 tablets is released, members of PicUntu community may want to work on porting their Rockchip RK3066 distro to the latest RK3188 mini PCs, so there’s hope with Linux support, probably excluding 2D/3D GPU acceleration and VPU support.

That would make it fastest Android TV stick ever. No 4K video support though, but who have 4K display anyway?

Now, the next step would be the massive storage like a SSD and we will can be happy with this computers.

I usually have something to comment about everything but this one is just too nice. Even looks cool, I like it.
Only thing better would have been a quad core A15 but that will probably not be at this price.
Speaking of price if this is cheap enough it’s perfect.

@Marius
Yeah, my sentiments exactly, I would want an av out but the device looks really good, high clockspeed, 2gb, hope it runs well and not too hot.

USB3, Ethernet and SATA would be great, but then it would be no longer called “TV stick” 😛

and of course proper linux support, but who does really still belief in that…

just found this in “products”:

if it’s RK3188 then it might be also interesting

Another RK3188 tv stick is coming out in April.
Looks pretty good…pcb pictures and antutu test at geekbuying blog.
http://blog.geekbuying.com/index.php/2013/03/08/tronsmart-t428the-first-rk3188-quad-core-mini-pc-coming/

@deadhp1
The Tronsmart T428 seems to have the same specs as the one above. It seems Eric partially copied the specs above though 🙂

@Jean-Luc Aufranc (CNXSoft)
I’m still not sure they are the same sticks
According the the rendered picture of the CR9 it shows 2x micro usb ports and no reset button.

The T428 shows an actual PCB with 1x micro usb port and a reset button.
It also shows a spot for bluetooth(currently not populated).

I expect that we’ll see a bunch of very similar RK3188 sticks since they are most likely based on a reference design released by Rockchip.

I think the main difference is that one has BT and the other not. According to geekbuying (I asked a question there, it is supposed to have BT anyway, even if many of the pages with specs doesn’t mention this fact)

Rikomagic MK802 IV appears to be based on the same design: http://liliputing.com/2013/03/rikomagic-announces-mk802-iv-quad-core-mini-pc-with-android-4-2.html

All based on the same board.

I received mine yesterday and have been playing with it tonight. May try and get a first impressions video up over the weekend 🙂