There’s a war going on in China at this very moment, a war fought between Chinese tablet SoC manufacturers to get the cheapest dual core tablet on the market, and according to diverse reports, it seems VIA Wondermedia may have won a battle with WM8880 dual core SoC, as the upcoming SunnyCube V7 tablet will sell for 249 RMB (About $40 US), just 20 RMB (~$3) more than AllWinner A13 based tablets. The rest of the world should be able to get it for about $50 – $55 from websites such as Aliexpress, after paying for “free” shipping. 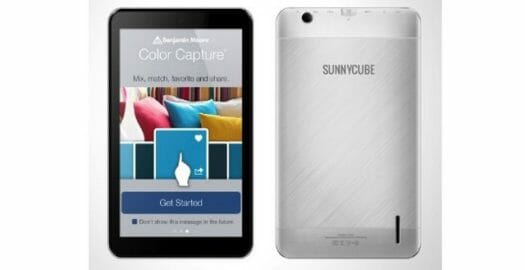 This Android 4.2.2 tablet should start to sell in China at the beginning of June.

There’s not much information about the new Wondermedia WM8880 SoC, but 1pad.cn leaked some benchmark run on WM8880-MID tablet reference design, showing decent performance with, for example, 11,600 points in Antutu. 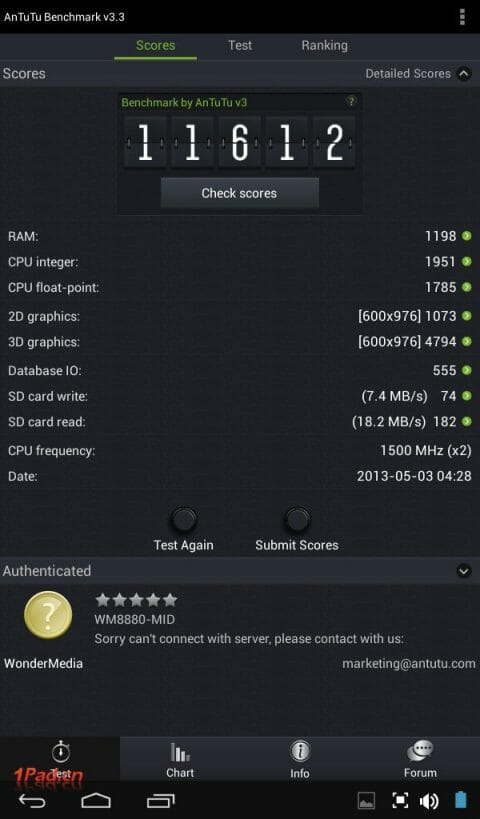 We also know it’s manufactured with 40nm process, that keeps the cost low, but power consumption should be  higher that dual core SoC using 28nm technology. WM8880 is said to cost just $4.99 US in quantities.

sounds really good as a TV movie player assuming it has HDMI (instead of this impractical sticks). How much does rk3066 get in antutu? Wasn’t it 8-10k? Maybe the resolution affects the result as RK3066 should be considerably faster

@renw0rp
I can see some scores above 12000 for RK3066 tablets, but the resolution would affect the GPU tests.
CPU performance should be very close, but GPU should be better in RK3066.

@onebir
Yes it should be.

Interesting; I think sellers have to pay at least 10% (maybe 20%, I forgot) Aliexpress fees, and postage would be about $15. But maybe
i) foreign volume sales of Q88 (which is regularly the top selling tablet on Ali) let the sellers get better wholesale prices &
ii) the packages for these small tablets are light enough that the postage is significantly cheaper…

@onebir
Interested in the seller fee… so I’ve searched for it. But the only answers I’ve found date from 2010, and it seems regular sellers pay a 5% platform fee, and “golden” suppliers 3%. I don’t know if this is still the case in 2013.

I think there’s a payment/escrow fee on top of this; I’ll ask my seller friends.

@Jean-Luc Aufranc (CNXSoft)
One of them got back to me; it is just 5% for him apparently, so sub $60 should be doable…

But I wonder whether dual core offers much utility with only 512MB?

@onebir
imapx820 is a dual core Cortex A5 so it should be slower.
However, we can’t use this Antutu score as a comparison because they used Antutu 2.9.x, which provides scores completely different, and much lower, than Antutu 3.x.x

@onebir
Well, the very first difference is that Y27B is “hot”, whereas Y27A is not 🙂
Y27B also has HDMI output which lacks on Y27A, so I’m very confused why B is cheaper than A…

@Marius
Yes correct. I can’t find where I wrote WM8880 had a quad core.

@Jean-Luc Aufranc (CNXSoft)
Ah, Hotness & HDMI… 😉 Anyway, these discounts probably signal undiscounted prices in a month or so. In a couple of months your prediction of <$60 dual core tablets should be true 🙂

cnxsoft : @renw0rp I can see some scores above 12000 for RK3066 tablets, but the resolution would affect the GPU tests. CPU performance should be very close, but GPU should be better in RK3066. That’s not really true because I we agreed above the RK3066 has a quad core Mali 400 so it should perform quite a bit better. The CPU is also probably not going to be better than RK3066 but where VIA will win is price. This is looking to be a very cheap SOC. I also suggest that anyone really interested buy this as VIA will replace… Read more »

Focalprice ad on this page, above the comments, is misleading:
http://imgur.com/GOeAdhM
(promises a dual core tablet for $49.99)
links to this item:
http://www.focalprice.com/CE0453B
(specifies a single core A13 tablet)

@onebir
1 CPU core + 1 GPU core = dual core SoC. Of course, they should have added the VPU, then they could have claimed a triple core tablet, and be all over the news… 🙂

@Jean-Luc Aufranc (CNXSoft)
It’s actually at $59 right now so this is quite a deal.