Last year, MIPS announced Aptiv Cores, but since then, the company has been bought by Imagination Technologies, and they’ve recently announced updates to the family, as well as new MIPS Series5 ‘Warrior’ CPU cores during Imagination Summit in Asia. 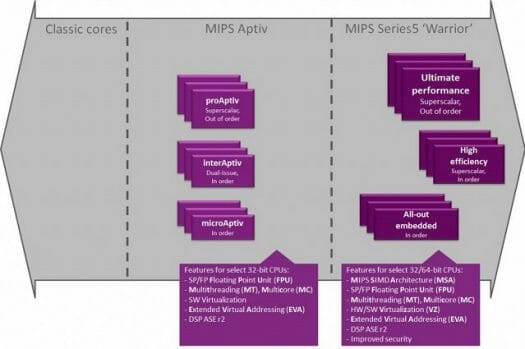 Before I write about the update to Aptiv cores, let me remind you of the 3 Aptiv families:

Imagination has added a small-footprint single-core version to the interAptiv family without the extra logic associated with multi-core coherency and L2 cache controller, as well as a floating point version to the microAptiv family for applications such as electric metering and motor control.

Most interestingly, Imagination also announced they will introduce MIPS Series5 ‘Warrior’ cores later this year. They will include 32-bit and 64-bit variants that like the Aptiv cores, will come with high-performance, mid-range and entry-level/microcontroller CPUs. Note that contrary to ARM, 64-bit MIPS core are not exactly new, as the first MIPS64 core became available in 1991, and Imaginations claims tools are already built for 64-Bit MIPS architecture.

The key ‘Warrior’ features include:

That’s about all we know at this time. A few more details about the MIPS Series5 features are explained on Imagination’s blog.

Article on ARM, MIPS and Intel:
http://www.forbes.com/sites/sharifsakr/2013/03/21/imagination-mips-vs-arm/
(Well, I thought it was interesting, not knowing much about all this…)

Are these MIPS processors open-source hardware or is this a naïve dream to think about?

@Patola
We are talking about Imagination Technologies here, the company behiind PowerVR GPUs. The silicon IP won’t be open for sure (that’s how they make money), the only thing we may get is the Linux kernel source, because they may want to comply with the GPL.