The Raspberry Pi fundation, a nonprofit organization, has brought a low cost ARM Linux platform to the masses, and Arduino already did that with electronics, but Harold Timmis, an engineer, found out it was still not cheap enough as he worked as a volunteer teaching electronics at his library. So he (and others) decided to clone Arduino Leonardo, setup a website called Borderless Electronics, and sell it without profit via Indiegogo for just $9 ($12 including shipping).

The board is indeed the same as Arduino Leonardo with different color, logo, and name:

Some passive components are from different manufacturers, and the micro USB connector is different, but this should not affect the quality. 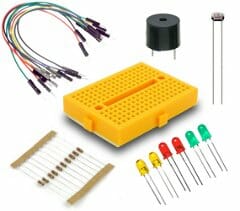 What’s more, the $9 does not only include the board, as a snap connector for 9V battery will be provided following a first stretch goal. The second stretch goal ($60,000) would add the following components if it can be reached:

The campaign has already received over $30,000 in pledges, and with 22 days to go this seems perfectly achievable. If you want to donate to a school, there are also pledges for 50 and 100 boards, for $500 and $990 respectively that include shipping via DHL or UPS. Lower pledges will be shipped via Hong Kong Post’s registered mail. The kits will be manufactured as soon as the campaign completes, should ship in September 2013, so you may received them in September (Courier) or October (Registered mail).

Thank you for info!

$2000 raised since this was posted; maybe 6h ago. Perhaps they should be thinking about another stretch goal…

@onebir
Several people have contributed via my website (18 for now), and I’ve also pledged for one myself.
I don’t have any Arduino board, so it’s a good opportunity to give it a try.

@Jean-Luc Aufranc (CNXSoft)
Should’ve guessed you could get stats on that! Anyway, well done publishing the article; in part thanks to it anyone in the world should soon be able to get a small arduino kit for $12 🙂

Aliexpress has a few Arduino Leonardo boards too:
http://www.aliexpress.com/item/Freeshipping-Funduino-Leonardo-R3-development-board-Board-USB-Cable-compatible-arduino/949580011.html
http://www.aliexpress.com/item/Leonardo-R3-Development-Board-for-Arduino-Compatiblae-USB-Cable-Wire-FZ0437-Free-Shipping-Dropshipping/918008140.html
Prices are “interesting”.

Actually at <$10 shipped those prices suggest there's still some profit (at the Chinese end) in the Borderless Electronics price. I still think it's a worthwhile project though: it'll get much more publicity. It might not exactly put a $12 microcontroller/electronics kit into the public imagination, but it has a much better chance of being discovered by people on the borderline of experimenting…

@mj
yep, and this shows that the project is entirely realistic and is likely to fullfill what it’s set out to do.

Personally I ordered some Arduinos from China via Aliexpress in the past, all work perfectly.

@mj
I did not know Arduino clones were that cheap… Hopefully Borderless Electronics will reach their $60,000 goal, so the board ships with the extra components.

It also makes me feel more confident there won’t be any issues with unexpected charges delaying the project.

@$47k by the time anyone reasds this…
It turns out there are some pretty cheap add-on component kits available, eg this for $5:
http://www.aliexpress.com/item//788267327.html
Same store has breadboards; cheapest available singly appears to be $7.

@$76k & 2827 of 3,333 funders required for stretch goal 3. Harold’s getting a bit worried about supplies of the ATmega32u4 chip, & started buying them gradually to ensure adequate stocks.

(~7k chips needed for orders to date, which apparently is more than the big distributors combined keep in stock. But needing so many, couldn’t he get a batch direct from Atmel – at a better price even?)

@onebir I think 7k is still low volume to order directly. When I used to work… I’ve dealt with some ICs companies. One suddenly stopped talking to us when we said we had 30k order target, others said they were sorry they would not be able to provide support for us (even though we just needed the SDK and be able to buy ICs), and I’ve seen a pretty disappointed face on a sales guy when he asked yearly quantities, and we said 100k per year, whereas he expected something more like one million ICs/year. 🙂 I guess the issue… Read more »

“Because a high bid for the volume I need in order to create all of the boards is so high and a high bid on the micros could create a false market price. For this reason I am buying a small amount every day according to the availability of the micros on the market from different distributors. ”

“false market price”? If he buys larger quantities he could get a better deal. Or does he mean he could actually affect the worldwide market price of Atmel ATmega32u4 MCUs?

@onebir
Stretch goal #3 “unlocked”. Nice, but somehow I don’t expect a new goal, as the last one had to be sponsored.

@Jean-Luc Aufranc (CNXSoft)
From Harold’s latest announcement:
“at this moment I do not have another stretch goal, but I will have one for tomorrow.”
Hmm…

(Re your comment on Aug 2, you know way more about the electronics industry than me, but when I read that I was also confuse, but concluded he probably meant he might accidentally push up the price of those MCUs in the short-term, by causing a major distributor to go out of stock, because Atmel production schedules are likely pretty inflexible for a few months in advance. But that was a guess!)

This appears to be people collaborating with Dimitri of “smARtDUINO”. For anyone reading this who doesn’t know who he is, just go to Kickstarter and search for “smARtDUINO”. Read a few of the comments to see how well he’s managed to deliver on other low-cost Arduino clones.

@Paul
Thanks for the info. Hopefully, the Indiegogo project won’t have those issues. It’s basically a copy/paste of the Arduino Leonardo, and they “just” have to manufacture it. Hopefully, they’ve learned from their previous mistakes.

Lol, this is getting out of control… The plant manager has decided to pay for extra components if we reach $120,000:

I certainly hope everyone who paid gets their boards. Getting ripped off sucks. But then again, if all you want is a cheap Arduino clone made in China (where not even a penny goes to support the Arduino project), there are plenty already on the market for under $10 with shipping. That’s $2 less than this Indiegogo offer. Sure, you get some parts included, but that stuff it available very cheap too, with free shipping. The evil genius behind this campaign is some folks have a dismal track record on Kickstarter make a huge sale on Indiegogo, shipping cheap products… Read more »

@Paul
It’s difficult to get the extra components that make an ‘Arduino kit’ in small quantities; a few of us looked into that above. So provided shipping, quality etc work out, the IGG project with all the extras is a pretty good deal…

Argh! I missed it, they finished a week early. Any chance of a re-run?

@Ab
I think for the next step they want to focus on tutorials, but there may be another campaign in a few months (next year).

We’ve tried to find something similar directly from Chinese online sellers. We could not match the price, but we’ve found a way to order a complete kit slightly better than Borderless Electronics for $20 – http://www.cnx-software.com/2013/08/13/how-to-buy-an-arduino-leonardo-clone-kit-for-less-than-20/