Back in February, ISEE announced 2 new computers-on-module based on TI AM335x at Embedded World 2013. IGEP COM AQUILA, one of those 2 modules based on AM3354, is now available and we have a more information about software support, and baseboard availability.

AQUILA specifications do not appear to have changed since the earlier announcement:

What’s new to me, is the tiny base board used for development called IGEP COM AQUILA EXPANSION. 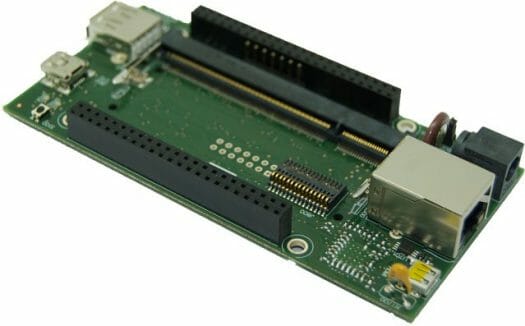 This base board has the following key features:

The company provides U-Boot and the Linux kernel 3.8.12 for the board as well as images build with Yocto 1.4.  The hardware reference manual, and mechanical files are available on IGEP COM AQUILA page, and further information will eventually be available in the Wiki. The source code is available via the company git repository at http://git.igep.es/. Development needs to be perform in Linux, but if you have to work with Windows, ISEE also provides a virtual machine with all development tools pre-installed that can be run in Virtual Box or VMWare.

According to the press release I’ve been given the modules is available for 79 Euros in ISEE e-Store, but I could not find it there yet [Update: Here’s the link: http://shop.isee.biz/igep-com-aquila.html]. I could not find pricing or availability about the base board at this time.