Last review, I wrote an unboxing post about M8, an Android TV Box powered by Amlogic S802 quad core Cortex A9r4 processor with a Mali-450MP6 GPU. I’m still waiting for the firmware to test this device. In the meantime, Geekbuying sent me Tronsmart Vega S89 (Click for full specs), another Android Kitkat TV box powered by S802. There are actually two versions: Tronsmart Vega S89 (16 GB Flash, dual band Wi-Fi), and Tronsmart Vega S89 Elite (8GB Flash, 2.4 GHz Wi-Fi) which is the model I received. I’ll write an unboxing post today with the device and the board, and test the firmware in the next few days.

Geekbuying sent me the sample via DHL which I received in the package below. 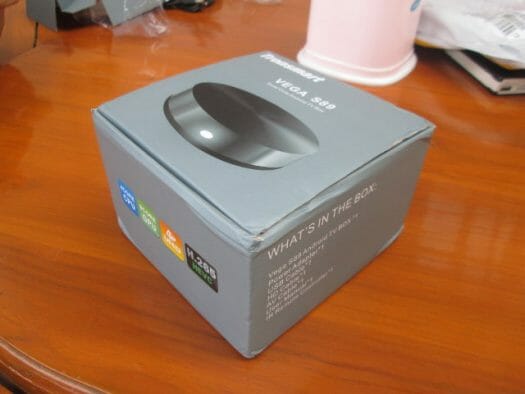 There are quite a few accessories included with the board.

From left to right: IR remote control (2x AAA batteries not included), HDMI cable, 5V/3A power adapter, Vega S89 TV Box, a micro USB to USB cable, an AV cable, and a user’s manual in English describing the ports, and explaining how to use Android. Interestingly, M8 is sold with a 5V/2A, but Vega S89 manufacturer has decided to play it safe with a 5V/3A power supply.

Let’s have a closer look of this cylindrical box to checkout the ports at the back. We’ve got the power button, two USB host ports, an AV output (composite + stereo audio), the power jack, an RJ45 Ethernet port, HDMI & optical S/PDIF outputs, a micro SD slot, and a micro USB OTG port. The top of the box is very glossy, and the side matte.

You can have a look at the unboxing video if you wish.

To open the box, you need to remove three stick pads at the bottom, and remove 3 screws. That part is easy.

We’ll see AP6210 Wi-Fi module (2.4 GHz) and its internal antenna, all the various ports, a 8GB Flash chip, and an emplacement for another flash for the 16 GB version. Just like M8 there’s an heatsink on top of the SoC which this time points upwards in the enclosure. The UART pins can be seen just on the right of “Netxeon S82_V2.0_20140304” markings on the board.

Completely removing the board from the case was a bit more complicated, but by pushing the connector with a screw driver it eventually popped out. There’s nothing really noticeable on the bottom of the PCB, except there’s another thick metallic plate on the bottom of the enclosure. So all S802 based products seems to produce a lot of heat, and require some serious power dissipation measures, unless designers have been especially careful on the Vega S89 and M8.

Tronsmart Vega S89 Elite (shown in this post) is available from GeekBuying for $105, and Vega S89, replacing AP6210 Wi-Fi module with AP6330 dual band Wi-Fi module, and adding 8 GB Flash, for $120. You can also find it for the same price on various stores on Aliexpress.

thx for the unboxing
on the box they are the mention to HVEC support, but the S802 doesn’t support it
very weird, unless that support it via a software decoder???

Love your reviews, but one thing consistently missing that’s quite useful to know is idle power (especially when you mention heat dissipation! Would love to be able to compare consumption)

@Jean-Luc Aufranc (CNXSoft) Without having a datasheet of the S802 I wouldn’t be sure that passthrough capability is the parameter to determine the model of the SoC by, better test decoding of these codecs to pcm (and with the stock player). I also would be happier to know that all the S802 models supports passthrough and differentiate in decoding capabilities (do we need ffmpeg-la license only to the latter ?) so I would like to see such test. A quick serach at Geekbuying blog show that the internal player can’t decode dts on the Vega S89 (XBMC can but it… Read more »

hello, please, when you do the review, for the tronsmart vega?

it is really interesting that board and SOC support eMMC and NAND memory
but most products still use NAND
http://superuser.com/questions/594357/ssd-sd-emmc-raw-nand-what-are-the-differences

Does anyone know what kind of AC plug is the one that Vega S89 brings? I live in Europe/Portugal as as you know we use Euro Plugs which are different from uk plugs. (this one doesnt seem to be uk plug).

Thanks for the answer in advance.

@Bruno M.
I’ve checked with GeekBuying and they told me “We have US standard and European standard plug”. I assume you have to ask at the time of purchase. Normally sellers have some kind of chat system, wherever you plan to buy, you could ask them directly via their website to make sure.