MINIX has been providing Rockchip based Android TV boxes for a couple of years notably with their NEO X5 and NEO X7. They will now also offer devices powered by Amlogic with NEO X8 and NEO X8s respectively powered by S802 and S802-H quad core SoC. The advantage of the former is that it fully supports DTS and Dolby decoding and pass-through. 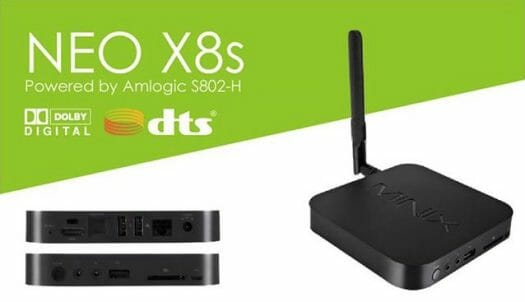 Let go through the hardware specs of both devices:

Both devices will run Android 4.4 Kitkat. 4K2K video decoding and output are supported, as well as 1080p video encoding.

From an hardware specs perspective, NEO X8 is very similar to the two other Amlogic S802 STBs I’ve received, namely M8 and Tronsmart Vega S89, but NEO X8s is the first Android TV Box I’ve ever seen being announced with S802-H for proper Dolby and DTS support.

Pricing has not been announced, but the company expects their new devices to be available by the end of May. A new air mouse, NEO M1, has also been announced with “six-axis gyroscope support and built-in anti-shake technology for superior accuracy and control”.

Via Facebook. Thanks to Luis and Tadej for the tip.

It looks like they will not wait for RK3288, but instead will use allready available amlogic S802. I am really looking forward for prices.

But I see S802 as a middle tech, not a general processor but as a availability before.

I agree that Amlogic S802 should almost be classified as a low-end SoC for media players today. I think that the major thing that makes Amlogic S802 not be middle-end or high-end SoC is that it is lacking real HEVC / H.265 VPU hardware support.

Sure it true that HEVC / H.265 media is hardly available yet, but still all other competing SoC’s in the same price range does support HEVC / H.265 now so one should expect it from Amlogic in that price range too.

Problem is rockchip is a pain to work with. They never open up their processors so that we can make software to work on them better. Its been a pain getting XBMC to work properly on RK devices without custom roms. I am very interested in these amlogic chips as amlogic is much more open and willing to make sure their chips work with software

jason : Problem is rockchip is a pain to work with. They never open up their processors so that we can make software to work on them better. Its been a pain getting XBMC to work properly on RK devices without custom roms. I am very interested in these amlogic chips as amlogic is much more open and willing to make sure their chips work with software Have to agree with Jason on this. Historically, the AMLogic chips have appeared underpowered/under featured, but been much better devices after some customisation/optimisation. The old kit based on the dual core AML8726-MX/M6 chipsets… Read more »

Other options for buying these are also available @ http://www.minix.com.hk/AboutUs/Wheretobuy.html