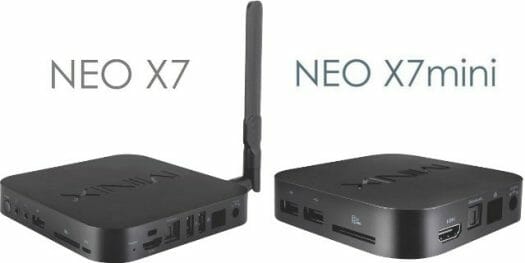 The first (very obvious) difference is the lack of external Wi-Fi antenna on the MINIX X7mini, but that’s not all as shown in the comparison table below.

Both devices run Android 4.2.2. In order to bring the cost down, they reduced the flash memory size, embedded an 2.4GHz Wi-Fi module, and got rid of the external antenna, removed 2 USB ports (1x USB host, and 1x USB OTG), as well as the microphone and headphone jacks. MINIX NEO X7mini is about a third smaller than NEO X7.

MINIX NEO X7mini price has not been disclosed yet,  and the device will be available at the end of August, beginning of September.

I sometimes don’t really understand these products. Instead of the mini why can’t I just buy a RK3188 stick for $60, then put a $10 USB hub + ethernet adapter and be done with it for $70 ? I doubt the mini will cost less. Also you can add a USB sound card and USB wifi adapter to get the full Neo X7 specs for way less money.

@Marius
I think Minix gets a bit of brand recognition & its prices reflect this. And people don’t mind paying an extra $20-30 to avoid a tangle of cables/adaptors in their living room. (This said, the <$15 Measy U2C-D would go some way to avoiding that, but how many people know about it?) I guess another issue is: would USB peripherals necessarily work?

@149 one can order an odroid xu with the a15 chip , the psu and a case. What’s is the better buy in your opinion

@Larib The $149 for the Odroid isn’t the full cost though. You still need to pay for storage, $40 for 16GB. Plus shipping was about $50 the last time I checked Hardkernel, plus you’d then have to pay import duty on top.

I thought about getting the $89 U2 a while back but once I factored in all the additional costs it came to about $200.

It’s a shame. They’re nice pieces of kit. The only thing I’d be worried with the XU is the GPU. Not linux friendly.

For the cheaper pens, thermal figure is different (keys/pens have much littler and hotter case), ethenet is only wireless, USB is single, no SPDIF, no integrate remote control (when usb availability is limited, remote is a plus..)

The Odroid-XU is tempting, but IMHO as it has acrive fan I’d like to know fan sound and power figure (other than linux drivers ) before buying that thing.

@onebir
You make a good point, especially about the USB stuff not working, at least not in Android. $15 cheaper is beginning to sound more reasonable.
I guess I really don’t need what this one has. All I need over the basic TV stick is Ethernet and some USB ports.

Marius : I sometimes don’t really understand these products. Instead of the mini why can’t I just buy a RK3188 stick for $60, then put a $10 USB hub + ethernet adapter and be done with it for $70 ? I doubt the mini will cost less. Also you can add a USB sound card and USB wifi adapter to get the full Neo X7 specs for way less money. Percentage-wise, it may be a lot cheaper to do what you are proposing, but in absolute terms, it is maybe $40-50. And in exchange you have to spend more time… Read more »

@Eas
I guess my main problem is that I really don’t need much more than a TV stick has, maybe if I did I’d consider this.

@Marius
The sticks appeal to a certain crowd while a box like the Minix I could buy my parents.

I like the fact it has all the ports I need…plus an ethernet port.
Why screw with wireless if your house (and TV) is already wired.

The device is now available on dx.com too.

The cheap RK3188 sticks (such as the MK908) I recently purchased,, has severe stability issues! The devices (I got two: one for my bedroom and one for my living room) crash several times a day and requires constant restarting. The Minix brand us much more stable in terms of HW and ROM builds

I find the photo of PCB of MINIX. minipcsale.ru/stati-i-obzory/9-minix-neo-x7 Looks very good !