AMD has announced its 3rd-generation Mainstream and Low Power Mobile Accelerated Processing Units (APUs), codenamed codenamed “Beema” and “Mullins,” respectively, featuring four x86 Puma+ CPU, AMD Radeon graphics, and a platform security processor (PSP) with an ARM Cortex-A5 core for ARM TrustZone  security. Beema APUs have a TDP between 9W and 15W, whereas Mullins APUs all have less than 5W TDP (2.8W SDP). So I’ll only cover cover Mullins processors in this post, as they may offer an alternative to Intel Bay Trail-T processors. 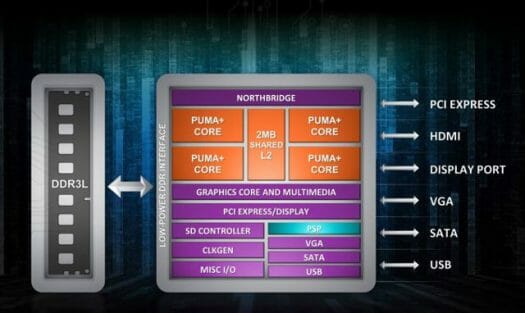 Beside the new Puma+ CPU cores, and AMD R Series GPU, performance and power consumption have been achieved thanks to:

The company is apparently focusing their efforts ion Windows, and end-users would have to use BlueStacks running on top of Windows for Android support.

Multi-threaded performance was however similar to Z3770 in Cinebench multi-threaded benchmark.  The A10 Micro-6700T powered tablet  was also clearly ahead in JavaScript/Web Browser test against platform such as Asus Transformer Book T100 (Intel Atom Z3740) and Apple iPad Air. One oddity was the lower performance of the reference tablet with PCMark7 which tests the overall system performance. Anandtech assumed the disappointing score may be due to other components of the tablet or thermal limits of the tablet.

They could not compare GPU performance against competing platforms, but the latest AMD processor appears to have a decent GPU performance considering the 4.5W TDP Mullins processor can match, and even slightly outperform, AMD’s Kabini AMD-5000 with 15W TDP.

Looks promising.
Finally AMD developed a processor that will be the replace for the old and venerable Geode family and it should can compete with other x86, ARM and MIPS CPUs.