My posts providing and give instructions to generate minimal, headless, images for the Raspberry Pi, such as “84 MB Minimal Raspbian ARMHF Image for Raspberry Pi” and “12MB Minimal Image for Raspberry Pi using the Yocto Project” have been relatively popular with people just wanting to have small base to start with the embedded projects. For desktop users, Slitaz for Raspeberry Pi (34MB) is one option, but I’ve just found out there’s also an other alternative with PiCore 5.3, a Linux distribution for the Raspberry Pi based on Tiny Core Linux that’s just 24.7 MB to download. 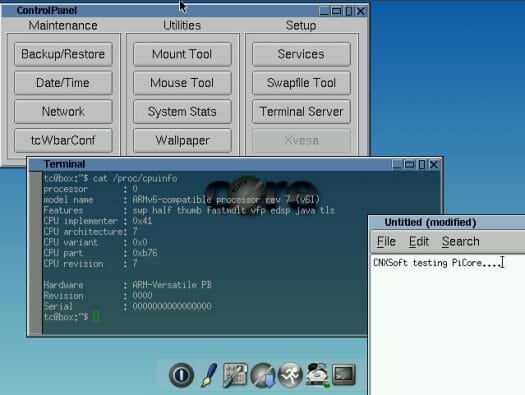 With an image that size, there’s obviously basically no applications installed, you’ve got flwm window manager,  wbar launcher, a control panel, a terminal, a file editor, and that’s about it. There’s no web browser, nor file manager, and you’d have to install the applications you want by yourself using tce-load package manager. If you only need an headless OS, a base (14MB) and SSH image (18.7) are also available for download.

If you still don’t have a Raspberry Pi, you can also try out PiCore 5.3 in QEMU in a Windows or Linux PC.

This will start an headless image login as tc user without password. If you want to use a desktop in qemu, the next step you really be performed with a virtual drive, so that it remains in persistent storage, but I’ve just installed it in the ramdisk for testing purpose:

The first command line will download an install Tiny Core desktop environment, and startx will start the X server.

if you have trouble running this image with qemu, add the following line to the kernel parameter list:
scsi_mod.scan=none