I have received Broadlink SP2 Wi-Fi smart socket for Android and iOS thanks to GearBest, a Chinese e-retailer, that was kind enough to send a sample for review. I’ll start by showing some pictures of the package and device, and report the results of my review with an Android phone (ThL W200).

The company send me the parcel via DHL, and I received in the package below, the top with the picture, and the bottom with specifications in Chinese.

There’s only the smart plug in the package. The top is a universal plug, but the bottom is a Australian/ Chinese plug, so most people would need a wall adapter. It support 110 to 240V AC up to 10 amperes, consumes less than 0.5W without load, and it designed to handle 50,000 on/off events. The thing that surprised me was the size of the plug at first, and it felt larger than I expected.

There’s also a user’s manual with the box, but in Chinese only, you can read download it here and there.

As usual I tried to open the device, but the 4 screw are a bit special (like a slotted head but full in the middle, not sure how these are called), and I could only remove 2 screws with the tool at my disposal, so eventually I had to give up…

The first thing to do is to download and install e-Control app for Android or iOS either using the QR code on the package, or redirecting your mobile’s browser to the broadlink.apk,  Now you can plug Broadlink SP2 into your wall socket, and start the app. 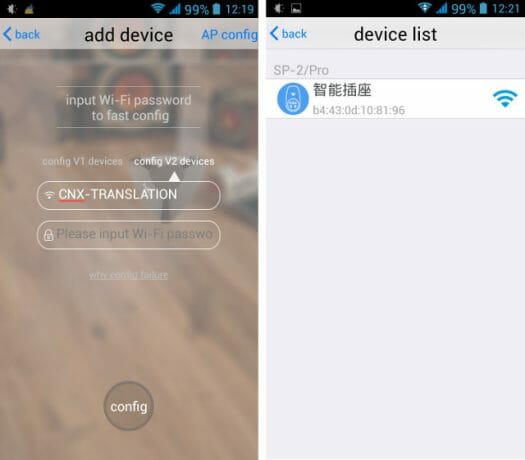 The initial setup simply consist of locating your Wi-Fi router, and input the Wi-Fi password, and after you’ll be shown your device with a pre-set name in Chinese, which you can change to your liking. I called it “Bedroom”. The most basic mode of operating is to use the On/Off button in the app (Grey: off, Green: On), or use the physical button to manually turn on or off the relay.

There’s also a timer function where you can set the On and Off time as shown below. You’ll also be notified when the relay goes on or off, with the downside that notifications are in Chinese…

The real-time power in the screenshot above is zero, because there was no load. So I connected a water boiler to give it a try… 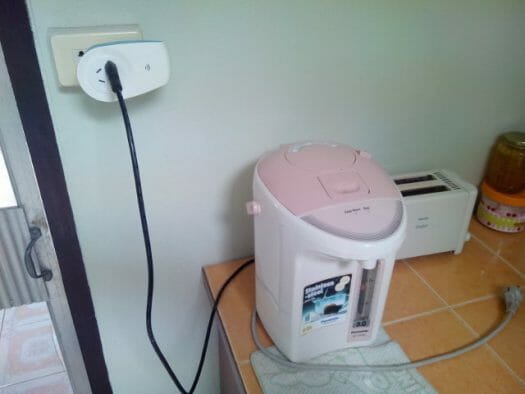 And it works nicely, and you can start the boiler a few minutes before you get up, and the “real-time” power consumption updated every 5 seconds or so, shows a realistic value of about 700W in the boiling phase. I wish it could be possible to get an alert when the water is ready, and the power drops below a threshold, as sometimes I start the boiler, and forget about it…. 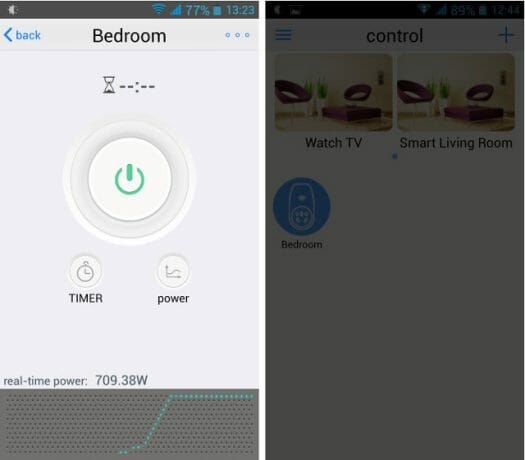 In the control section of the app, you’ll see “Watch TV” and “Smart Living Room” which are scenes that you can setup if you have multiple smart plug. For example “Watch TV” could turn off the lights, close the curtains, and turn on TV.

The “Power” button will show a longer term history of the power consumption. It test that part, I’ve connected the smart plug to the main socket of my office. I started my computer at about 9:00, it did a full backup just before 10 which explains the spike in power consumption (250W), and at noon, I went into suspend mode where it drops to around 25W) for sometimes, and etc… The chart shows clearly the few breaks I had during the day, until I turn off my computer around 22h30.

The resolution in this view is only 30 minutes, and there’s no way to zoom on a full day, and it only shows about 3 hours of data on the screen in the 24h view. However it gathers data over 24 hours, and you can just scroll to check the power consumption chart. The scale in Watt is shown on the left, but as you scroll it disappear which is rather annoying.

You also access weekly, monthly and yearly views that show the appliance working time, the cost, and total power consumption. The “electricity price” is set in the setting menu, and there are options with off-peak and peak times. It will show RMB/unit price, but just put the value for your currency, in my case 4 Baht per unit. The whole application is rather in Chinglish than English, so degree should read as unit or kWh. 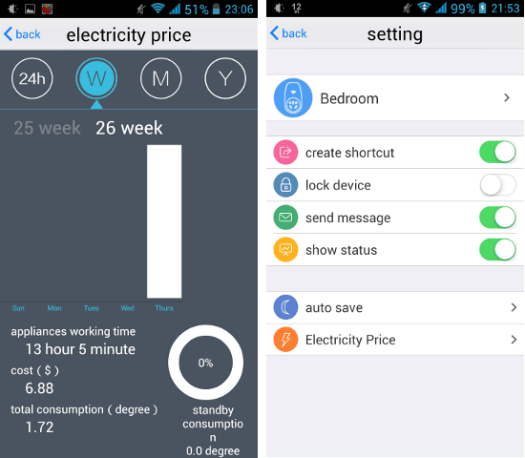 I could not find the Auto Home, Auto Away, and Auto Save functions advertised for the product, but you may need to login to QQ and Weibo to access these, and I haven’t tested that part… The cloud backup function provided to let you load your settings and data to the cloud certainly requires login to one of these two Chinese social networks.

In conclusion, Broadlink SP2 does the job it’s supposed to do, and I could not find issues with the hardware. The Android app is also not too bad, but a few extra features could be nice such as a more detailed 24h chart with the ability to zoom in/out, some extra notifications, better software localization and so on.

If you are interested, you could purchase Broadlink SP2 for $39.03 from GearBest which provided the device for this review, and you could use May05 coupon to get an extra 5% discount on Broadlink SP2 ($37) or any other products on their website. You can also find Broadlink SP2 on DealExtreme for $44 or Aliexpress starting at $39.99. All prices include shipping.

What is the Wi-Fi chipset / microcontroller used inside this? In the US market, the main home consumer-focused smart plugs are the Belkin WeMo (using Ralink chipset) and the D-Link Smart Plug (using Qualcomm Atheros chipset). They are both priced higher than the Broadlink SP2, though.

Also, is it possible to control the socket from a PC? Do we have any open APIs? Maybe a chance of accessing over HTTP with POST messages or GET requests?

@Ganesh @ AnandTech
I’ve tried to open it, but they’re using special screws, and I could not open it with the tools I have.

I’ve a pcap capture, Wireshark does not recognize the protocol, but most of the time data blocks of 128 bytes are exchanged, sometimes 72 bytes, and less often 1K+ packets.

They are also available at the english language jd.com for $29

@deets
It could be, but it not exactly the same, as the extremities are open. Having said that spanner drive screwdriver should do… I have one, but it can’t go deep enough.

If you have any leeway with the manufacturers, can you push them for opening up the communication APIs?

@Ganesh @ AnandTech I’ve asked them, and they replied they have an “open SDK”. However, you have to fill a form to get it, and they ask for the target market and quantities to purchase which I filled with TDB… So I’m not hopeful I’ll get further feedback, and I doubt I’ll be able to release the doc with their permission. I’ve also noticed D-Link and Wemo don’t provide documentation for their communication protocol, just Android and iOS SDK, so it will be difficult to say I’ll use another solution to get them to release it… If you want to… Read more »

By the way, if you want to ‘use another solution to get them to release it’, please check out Ubiquiti Networks mFi mPower Power Strips [ I reviewed one here: http://www.anandtech.com/show/7530/ubiquiti-networks-mfi-mpower-wifi-power-strip-review ]. The communication protocol is completely open, once you login via SSH (security focus, since they target the enterprise market). Discussion of the open APIs is in Page 4 of the above review.

FYI, Broadlink RM2 thingy is made on Marvell 88MC200 + 88W8782 combo module, which is kinda disappointing, as I indeed expected a Linux inside, not some MCU hack. I guess, the plug is made of same stuff.

@Paul
For consumer applications. my belief is that Linux-based or basic MCU stuff doesn’t matter. If MCU is making it cheaper, then it is good!

On the other hand, Ubiquiti’s products – the per outlet cost is actually cheaper than Broadlink or D-Link or Belkin! – need to be part of an enterprise environment and actually run Linux.

I think the attractiveness of these types of products will improve if they have in-wall units with this capability and/or multiple outlets in a power-strip type device (to bring down the per-outlet cost).

There are another socket, that cost less and is most little, you can view it at: http://www.kankunit.com
Also this have UDP protocol, but there are no PC program.
I need to know the protocol to make a PC program to connect it.
anyone have it?

@Stefano
I had covered this one too (no review though) – http://www.cnx-software.com/2014/04/29/kankun-kk-sp3-wi-fi-smart-socket-android-ios/ . It’s cheaper and smaller, but no energy monitoring, which after using SP2, I find to be the most interesting feature of the socket.

You’d have to reverse-engineer the UDP protocol, or ask for the protocol documentation to the Kankun guys. Btw Broadlink completely ignored my request, after I filled the form…

Is this work outside of the wifi network? If i’m not at home, i can controle this device via phone app using cellular network or other wifi?

@marius
There’s no obvious way to control the socket outside the LAN. Maybe there is one, but I could not find it.

@Jean-Luc Aufranc (CNXSoft)
I want to send programed commands from a PC to the broadlink. I want to do this with a programming language. This way, I would like to send HTTP messages. Isn’t it possible?

@Ewerton
One solution is to get the SDK from the company. You’d just need to fill a form saying how many thousand units you plan to buy…

If this is not an option for you, you need to reverse-engineer the protocol they use, which might be encrypted (TBC). No HTTP, but they send UDP packets over port 80. So it might be possible. Capture packet with Wireshark and try to find out what bytes refer to… Good luck.

By the way. after one or two months use, the power monitoring function is not working anymore on mine…

I saw this on other site…

Please download the SDK from the link below. Just remove the .jpg at the end.

Edit: Found this other document:
https://drive.google.com/file/d/0B65vYtefY0h2aE1LdWF5RG9sX00/view?usp=sharing

Have you tested Broadlink SP3 devices?