AppNearMe MicroNFCBoard is a development platform for Near Field Communication (NFC) comprised of an NFC transceiver, an NXP MCU, and all software stack and tools you need for development. This board also exposes various I/Os that allows you to connect to external hardware or devices, and it can be used with an Arduino, Raspberry Pi, mbed or PC/Mac. 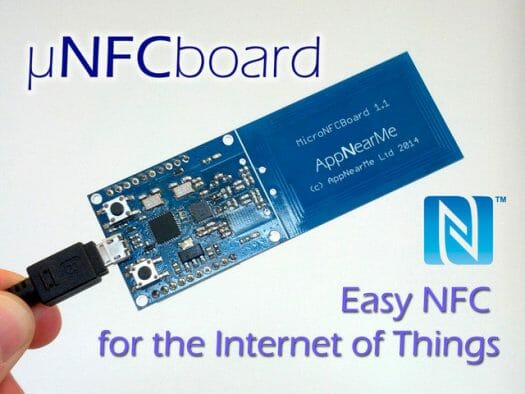 Let’s go through the board specifications first:

The board can be programmed using mbed.org online compiler, high level C/C++ SDK, as well as libraries and projects. I’d like to point out that AppNearMe has been working on NFC and mbed for a while, as I wrote about an mbed platform using their uNFC stack back in 2012. 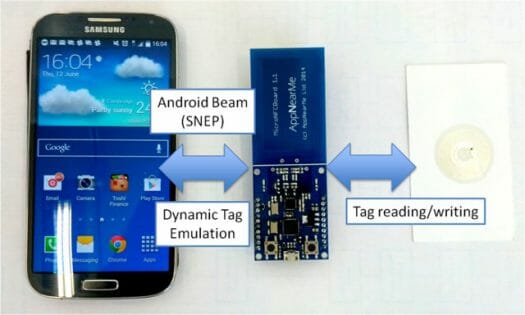 The three main NFC modes can be handled with the board using the provided API:

MicroNFCBoard can be used in standalone mode, or can be connected to Arduino via SPI, and other platforms (ARM development boards, PC/Mac) via USB using a Python library for programming. The board will be fully open source with the company releasing the board firmware, and hardware designed files.

Some practical examples include a robot piloted with NFC tags, a Youtube video transferred from an Android phone to a Raspberry Pi via NFC, a mood lamp demo, or light and temperature data in real-time with an Android phone. The video below shows how it’s possible to have different users login to the Raspberry Pi board with their own NFC tag, or their smartphone.

The company has launched a Kickstarter campaign to fund mass production of the board with 20,000 GBP. The early bird perk start at 30 GBP (~$51.5) to get MicroNFCBoard, after which it will be 40 GBP (~$68.5). Other perks with NFC tags, sensors, multiple MicroNFCBoards, the mood lamp, etc.. are also available. The boards are expected to ship on October 2014.