Mediatek had already announced two 64-bit ARM SoCs with MT6732 and MT6752 boasting respectively four and eight Cortex A53 cores for mainstream and premium smartphones. There are now reports that the company will launch an eight core 64-bit LTE SoC with [Update: finally it’s eight ARM Cortex A53 cores, no HMP here]. 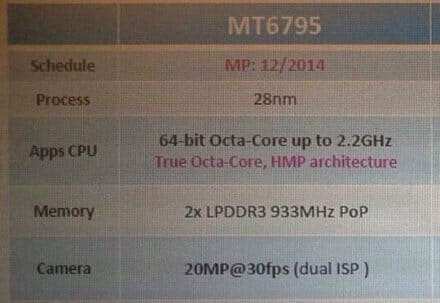 . The company also claims MT6795 will provide an easy upgrade for OEM from their MT6595 LTE SoC, a big.LITTLE ARMv7 processor (Cortex A17 + Cortex A7).

i thought hmp referred to different processors. i.e. gpu, sound/radio cpu, video codec, etc (heterogeneous cpus) on the same coherent global memory system. “app processor” === “apu”? the hmp moniker could definitely be applied to any hsa device for example, and it goes beyond just the cpu and gpu on kaveri for instance.

big.little are just the same to software and execute the same code and are homogeneous in that respect.

I’ve noticed companies like to highlight their ARM big.LITTLE processors support “true” HMP ever since Exynos 5410 silicon implementation could not support HMP.

So finally Mediatek MT6795 has just eight ARM Cortex A53 cores, no A57, no big.LITTLE here…