If you’re a fan of HDMI TV sticks, but wished it could use an Intel processor, instead of the various ARM processors currently available, your dream may have come true thanks to ZOTAC ZBOC PI320 mini PC. Although it’s not quite as small as your standard HDMI TV stick, it’s small enough (115.5mm x 66mm x 19.2mm) to fit into your pocket, and it’s also much more powerful, as it features Intel Atom Z3735F quad-core Bay Trail-T processor, 2GB RAM, 32GB flash, wired and wireless connectivity and more. 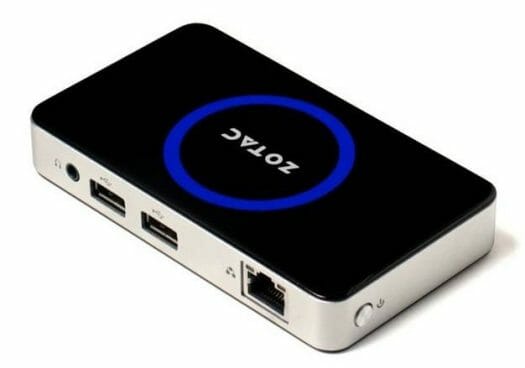 This mini PC is sold with a VESA-compatible mount, two mounting screws, an AC adapter, a warranty card, a user’s manual, a quick install guide, and a OS recovery disc. Which OS? Windows 8.1 with Bing with various languages depending on the model. There are four models, that only differ by languages shipped with the Windows 8.1 version. In case you’d rather not use Windows 8.1 for Bing, especially it’s reported to be buggy, you may probably be able to install Linux distributions such as Ubuntu or Debian, and possibly Android.

You can watch the promo video below comparing it to the (huge) Intel NUC, with a quick look at the board, and software demos including XBMC and 3D games.

Via Fanless Tech with additional info by Liliputing

I cant find any information on the power consumption 🙁 It is passively cooled, so under 10W I imagine, but there are no details.

@Brian
Since it’s based on a tablet SoC, power consumption should be relatively low. Maybe they are using a 5V/2A or 3A power adapter.
The SoC itself has an SDP of 2.2W – http://ark.intel.com/products/80274/Intel-Atom-Processor-Z3735F-2M-Cache-up-to-1_83-GHz

Having just played with a Bay Trail laptop I can say that while the performance is satisfying it’s certainly not what you’d expect from a modern CPU and any Core CPU will wipe the floor with this.
Given that you can find Core based Celeron 1037U passive mini PCs on aliexpress for under $200 and even Core I3-I5 passive ones for $200-250 ( again passive ) I’d much rather buy one of those than anything with Bay Trail.

@sam
according to Aliexpress searchbox:

Thanks for the extra information.

Some people thought it may be a scam first, but people did buy some and got the goods.

The Eglobal shop on Aliexpress received good reviews from customers.

@Bruce
I believe the question was for passive i5 under $250. (I’d also be interested)

@sam This is an I5 one : http://www.aliexpress.com/item/Barebone-System-Mini-Computador-Download-Free-Opera-Mini-for-PC-Intel-Core-i5-Processador-No-RAM/1908927157.html It is barebones so yes you do need to add at least $70 for that but at least you can add what you want, SSD , HDD , how much RAM you want. This I3 one at $215 with shipping even has RAM and SSD though you’re probably going to need a bigger SSD ( it’s an option you can contact the seller about ): http://www.aliexpress.com/item/mini-pc-x86-with-Intel-Core-i3-3217U-1-8Ghz-4-USB-3-0-HDMI-VGA/1877794997.html So yeah, no brand and a bit risky but even though the Zotac option is not that bad where price is concerned I’d try and stay… Read more »

@Marius, Looks a nice box. But I wonder what is better, buying a ready htpc (popcorn hour) or a DIY linux XBMC solution. Price wise it’s the same even if You buy a decent arm box. You can buy a popcorn hour with DVD slot b ut without harddrive for 200€. The intel solution will be the same when adding harddrive and ram. Installing openelec of linux with xbmc should go without problems and should be stable. Altough you still need a remote. If you go the arm way it should be less expensive but without harddrive and a lot… Read more »

I’m not aware of anyone successfully (meaning full support for audio, gpu, vpu, wifi, etc) running Linux on a baytrail tablet. This Tablet SoC is quite different from the desktop versions because there is much higher level of integration. As an example, the tablet SoC do no support any audio bitstreaming of AC3/DTS at all and everything is down-mixed to PCM in Windows 8.1. I’m surprised Zotac would promote an XBMC media player using this hardware.

I kind of like ARM and all that but I have to admit that at the moment there’s nothing like an Intel ( or AMD ) small form factor PC as far as Linux is concerned. Intel and even AMD invested lots of money and effort into open source drivers and Linux while ARM and friends ( PowerVR ) are just concerned about making money and their closed source drivers. It’s a huge difference and one reason I’m eagerly awaiting Intel powered phones with an Intel GPU. Also while I’m usually a fan of DIY in this case those Intel… Read more »

Mark : I’m not aware of anyone successfully (meaning full support for audio, gpu, vpu, wifi, etc) running Linux on a baytrail tablet. This Tablet SoC is quite different from the desktop versions because there is much higher level of integration. As an example, the tablet SoC do no support any audio bitstreaming of AC3/DTS at all and everything is down-mixed to PCM in Windows 8.1. I’m surprised Zotac would promote an XBMC media player using this hardware. Correction to my original post above. After grabbing latest BIOS and drivers for my Z3740 tablet, I was able to get AC3… Read more »