Many low cost Intel mini PCs sold on the market do not include storage and memory, and you have to add them yourself. On the contrary, ECS LIVA desktop computer powered by an Intel Bay Trail-M processor will work out of the box as it comes with 32GB eMMC and 2GB DDR3L, both soldered on board, and will sell for less $200 once it becomes available. 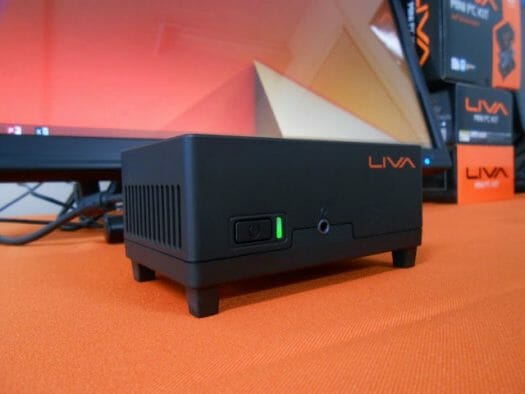 Here are the currently available specifications of this small x86 computer: 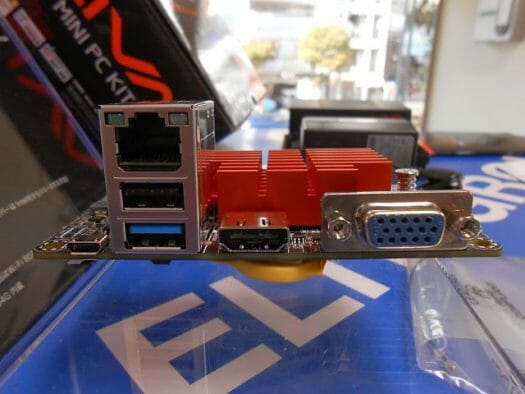 The product is sold as a kit, supposed to take less than a minute to assemble, with the motherboard (ECS BAT-MINI), a case, an antenna, a power adapter, and a manual & drivers DVD. It won’t come with a pre-installed operating system, but you’ll be able to install Windows 8.1, and Windows 7 and Ubuntu will become available soon. M.2 is a new type of expansion connector destined to replace mSATA and allow smaller SSDs. M.2 also supports PCI Express 3.0 and USB 3.0. In this computer the M.2 interface is used with a compliant Wi-Fi/BT module.

ECS LIVA mini PC kit is smaller than the latest Intel NUC, once RAM, storage and wireless connectivity are taken into account it should also be cheaper than Intel NUC, and it’s the first Intel based desktop computer that I’ve ever seen powered by a micro USB port. It looks like you may need a 5V/3A power adapter however, so all these 5V/2A USB adapters in your drawers may not cut it.

Nice toy! But how is it possible that Lenovo miix-2 or Dell 8 inch tablet on widows may cost about 250$? There you have screen, touch and battery in addition to what you have in this PC.
Too expensive?

@Alex
I think the tablets may be sponsored by Intel. I’d assume they also use Bay Trail-T, instead of Bay Trail-M. I haven’t checked the performance and price difference between the two, but I guess Bay Trail-M is a little faster, a bit more expensive, and consume a little more power.

@Alex
The BayTrail-T processors go for about $30. The M processors are between $107 – $161 (prices will fluctuate).
Quite a big difference!

Still, in my vision, it is possible (to try) to create an HDMI stick PC z3740 based for quite good money. The motherboard with case may be less 150$.
(Rhetorical question) Why nobody tries to do it?

So no SATA? :s Any sign of benchmarks for Bay Trail M devices?

@onebir Well, SATA is old school stuff, the m.2 (up to x4 PCIe NVMe, not the ACHI SATA nonsense) is the nice low-end version of the modern PCIe SSD tech, the nice mid-/high-end is the x4/x8 Gen 3 NVMe SSD… SATA is simply too harddrive-specific spec (all that mess with GPT/MBR, blocks and cylinders etc.), there is way too many layers of both hardware, and software, to get modern SLC/MLC/TLC talk to DDR3/4 memory pages, the NVMe cuts all that old cruft off, and especially all embedded (x86/ARM/whatever) really should try to push into using that, it cuts (software) CPU… Read more »

@Alex
I think power dissipation may still be an issue. We haven’t seen any Cortex A15 HDMI TV Sticks either…

@Harley
OK.. I did not really run the numbers. Prices may be very similar then.

@Alex
Supply and demand. This is a niche product compared to a tablet.

@The Cageybee
No one is paying intel $100+ Baytrail CPUs, or if they are, they get huge rebates.

@onebir
Yeah, for NAS use this thing sucks, even the m.2 is used up by an silly WiFi crud, the only bootable storage is eMMC/USB, and for spinning rust you would need to use it as external USB storage… Sure that works, but ugh, uuuggglllyyy!!!

There are better NAS-like Atom boards (lately those Gigabyte boards have started to become the default to go for), even some ARM-based systems work better as NAS. 🙂

ECS Liva microsite is up: http://www.ecs.com.tw/LIVA/spec.html