ZOTAC, a company known to provide small x86 Linux PCs, is currently showcasing an ARM based version at CES 2014, part of their ZBOX nano series, running either Ubuntu 12.04 or Android 4.2 on a Freescale i.MX 6Quad processor. 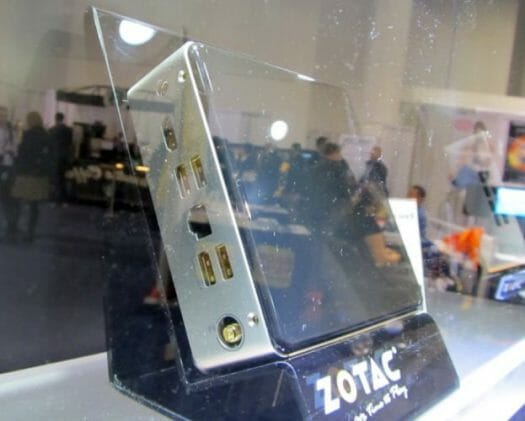 @adem
It won’t come with a remote, and i doubt it has an IR receiver, but you could always use a Bluetooth or RF air mouse / keyboard with this computer.

But yeah this could be very nice XBMC box, esp with that 2,5″ tray.

@Jean-Luc Aufranc (CNXSoft), I think you may be wrong here,

Zotac usually releases two versions for each of their boxes, one version without remote control and one “Deluxe” version that comes with remote control.

So if their history tells us anything then there will be at least one version of this box that ships with a remote control.

If HDMI is CEC ready, remote is not needed. You can use the tv remote.

Nice to see an ARM based system with SATA support. I’m waiting out for ARMv8 64-bit systems before buying any more ARM boards though…

@Bip
But remember that not all TVs support CEC through.
Ex. my old Philips 720 HD Ready LCD TV don’t.

@Harley
Thanks for the correction, I did not know that.

Hello all.
I have one question only:
Is linux using hardware accelareted graphics or only CPU soft based because this device is using Vivant and not the Mali like similar RK devices.

@Roberto rodrigues
Both 2D/3D hardware acceleration (Vivante GPUs) and hardware video decoding (VPU) should be supported with Freescale i.MX6 hardware. That’s why you get XBMC Linux on Compulab Utilite, and Wandboard.

A little skimpy on the memory. I’d like to see 4GB. Let’s hope the memory can be upgraded, and isn’t onboard ICs.

For all those who can’t wait:

There is no android box or android stick available yet, with more than 2GB RAM. QuadCore can only take up to 2GB. So no this will not be updated / not possible.@Gryphraff

@Lovetech
No stick, but some i.MX6 quad systems, although not cheap and not consumer orientated, do come with up to 4GB RAM.
http://www.cnx-software.com/2013/07/31/freescale-i-mx6-based-server-systems-cornfed-conserver-and-ventana-network-processing-boards/
http://compulab.co.il/products/computer-on-modules/cm-fx6/

@Lovetech, XBMC does not support A1x or A2x SoC video decoding via CedarX VPU because Allwinner have not released GPL open source license compatible library or drivers for it, and instead only offer closed source library for Android

There is not yet i.MX6 VPU support in mainline XBMC, only third-party Linux builds.

Third-party builds of XBMC for Linux have i.MX6 VPU support, but there is no Android support yet for i.MX6 VPU in any XBMC builds, third-party or official mainline?

Yes, you are right. But the Mele M5 A1000G and Mele M9 boxes (allwinner) do come with preinstalled XBMC under the name of Vidon.me TV. This version works perfect with Hardware Acc. so no problems for HD streaming / playing (I think customised on Gotham v. 13). Just like Pivos did with the XIOS XBMC version. @Harley

Great, did not know this. Def will check this out, only the price is a bit high like you said. Or you have to buy at least 1K (55$) ? But true, 4GB seems great! http://compulab.co.il/products/computer-on-modules/cm-fx6/ @Jean-Luc Aufranc (CNXSoft)

@Harley
People have reverse-engineered CedarX and are working on a VDPAU driver. Then all the big video players on linux will work with it 🙂

Ian Tester :
@Harley
People have reverse-engineered CedarX and are working on a VDPAU driver. Then all the big video players on linux will work with it

I know but not quite true, they have only reverse engineered parts of CedarX and it it is still far for “production” ready, so no use for XBMC end users yet.

I will never Buy Mele or Allwinner again. Mainline kernel and XBMC support is still not there

The box is called ZBOX Nano D518, and it will start selling for about $190 in September.
Source (in Japanese): http://www.ask-corp.jp/products/pc-partner/small-system/android/d518-quad-with-android43.html
Article in English: http://www.fanlesstech.com/2014/08/arm-based-zbox-detailed.html