Yesterday I wrote about MINIX NEO X6 featuring Amlogic S805 quad core Cortex A5 processor with HEVC hardware decoding. MINIX device is expected to sell later this month for around $120, but I’ve been informed there’s another model called TV110 with similar hardware specifications, but selling for around $60 or even lower on sites like GeekBuying and Aliexpress. I’ve seen one of the seller offering $10 coupon, so it might even be possible to get it for $50. 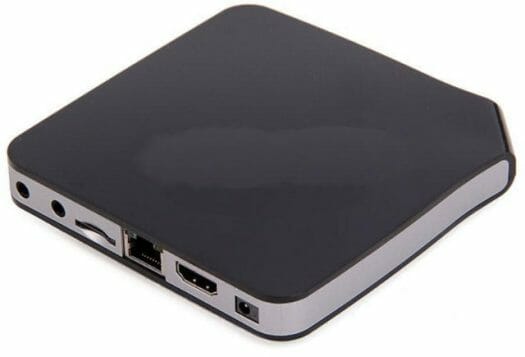 The box runs Android 4.4, and comes with an IR remote control, AV and HDMI cables, a 5V/2A power adapter, and a user’s manual in English. Compared to a device like MINIX NEO X6, you’ll lose the micro USB OTG port, the box probably uses NAND flash instead of eMMC, but you’ll gain AV output so this media player can also be connected to older TVs. It’s also not clear whether it can support HDMI CEC, and support (firmware update / community) will probably be limited.

I have one of these with a white remote. Manufacturer is ECT Dongzhou Technology: http://www.usb-ect.com/index.php?case=archive&act=show&aid=148 Marking on PCBA is : ECT_TV110_V1.1 20140714 WIFI chip is AP6210, which should support bluetooth.(on my box neither wifi or bluetooth worked, probably defective, but I got partial refund from Aliexpress seller.) Here is CPU-Z info: http://valid.canardpc.com/a/f2f8k5 Min. frequency should be 96 MHz I think. Governor setting is hotplug. Rooting is easy via EZ root update ZIP: http://www.freaktab.com/showthread.php?12076-EZ-root-update-ZIP-for-s802-(all)-quot-Stock-ROM-quot-ROMs Google play store didn’t work, but after rooting I’ve deleted the google apps & copied apps from gapps (downloaded from the net) priv-app folder to /system/priv-app. So… Read more »

One would think that it would be in the interest of SoC manufacturers and larger makers/resellers of media players like Geekbuying, MINIX, and Matricom to sponsor more XBMC/Kodi developers at least with hardware and early SDK availability so features like HEVC/H265 hardware video decode and HDMI-CEC support code get added to the official upstream version of XBMC as soon as possible.

Also it has an internal antenna & no micro USB OTG port(specs are wrong). HDMI CEC for me it isn’t working.
HEVC 1080p playback with default player works.

i dont see an AV port on this unit

@djwyze
The description in the second picture says “headphone jack” but it’s probably an AV port, because it’s listed in the specs, and more importantly, an AV cable (Composite + stereo) is provided.

I see a stock firmware has been released(it’s newer than the firmware on my box), it’s an img so have to flash with Usb Burning tool, problem is there is no microUSB OTG port and reset button either.

@Gabe
The reset button is not inside the AV port?

@Jean-Luc Aufranc (CNXSoft)
Well I remember correctly when opening the box I didn’t found anything behind the AV port,but I will open it again & take a picture.

Here are some photos, no reset button inside the AV port:
https://drive.google.com/folderview?id=0B10UT829N36jdUZEYjA3OHF0Q1k&usp=sharing
I’ve asked the manufacturer a method for updating.

@Gabe
Has anyone gotten far with this? I am looking for the firmware but I can’t find it anywhere. Also, does everyone have the different launcher then the other AML QuadCore boxes. I really want to fix my box and customize it a little.

There are two firmwares, but they are in img format, so the must be flashed with USB Burning tool. Don’t know how to connect to computer yet & no recovery or reset button anywhere, maybe one USB port is OTG.